Researchers use RNA-Seq to answer long-standing question about lupus 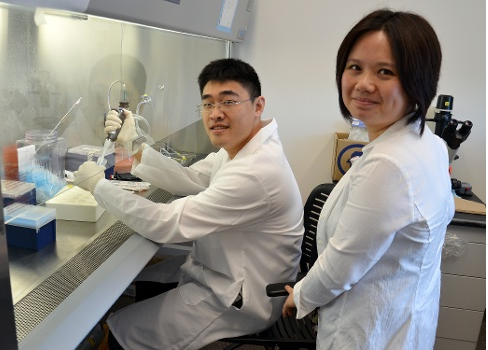 BLACKSBURG, Va., Dec. 7, 2015 – For years, biomedical researchers have suspected that a specific set of immune cells are responsible for causing disease in lupus patients, but until now they haven’t known for sure one way or the other.

A Virginia Tech immunologist has found that these cells — called plasmacytoid dendritic cells — do not, in fact, contribute to late-stage lupus in mice. The discovery, published in October in the Journal of Immunology, has implications for the future of lupus research.

Xin Luo, assistant professor of immunology in the Department of Biomedical Sciences and Pathobiology in the Virginia-Maryland College of Veterinary Medicine, and her colleagues built upon earlier research showing that lupus patients have been exposed to interferon alpha, a type of protein released by plasmacytoid dendritic cells — known as pDCs — and other immune cells. Lupus is an autoimmune disease that can cause chronic fatigue, joint pain, rash, fever, renal failure, and even death. It affects an estimated 3 million people in the United States.

“The clinical data show that patients with lupus have signatures in their gene expression demonstrating that they have been exposed to this protein,” Luo said. “That suggests this protein has a pathogenic effect — in other words, it can cause disease.”

Similarly, patients who take interferon alpha as an anti-cancer drug sometimes develop lupus-like symptoms, further supporting the hypothesis that this protein causes lupus. In 2013, a research group found that removing the pDCs in mice reduced the symptoms of lupus, whereas in 2014, another research group removed these cells from mice in both the early and late stages of the disease.

“When the researchers removed the cell type early in the disease, they found that it was really strong at disease attenuation, but in studying this phenomenon further, we found in our experiments that for some reason mice with late-stage lupus didn’t produce interferon alpha at all,” Luo said. “We asked ourselves, ‘How can these cells be pathogenic if they are not producing this pathogenic protein?’ ”

Luo and her colleagues used new cell-sorting technology to isolate pDCs at a high purity from the bone marrow in mice and separate them from other cells. They then partnered with researchers at the Biocomplexity Institute of Virginia Tech to study the isolated cells using RNA sequencing. Scientists Robert Settlage, director of the Data Analytics Core, and Saikumar Karyala, laboratory manager for the Genomics Research Laboratory, analyzed the samples. Song Li, assistant professor of genomics and bioinformatics in the Department of Crop and Soil Environmental Sciences in the College of Agriculture and Life Sciences, also helped to analyze the data.

“We answered the question that people have been wondering for many years: do these cells actually contribute to disease?” Luo said. “Our data strongly suggests that, in patients who already have lupus, pDCs don’t contribute to disease anymore. The damage is already done.”

Although pDCs may contribute to lupus five or 10 years before the onset of disease, they are not a factor after lupus symptoms develop. “We believe that these cells are only involved in the initiation of lupus, not the later exacerbation or progression of the disease,” Luo explained. “This is very clinically relevant because many researchers are still thinking about targeting pDCs as a treatment for lupus patients, which may not work.”

The researchers also found that they can use the same technology to search for early detection biomarkers for lupus. “We can move forward with this set of data to investigate possible early detection and figure out the role of the altered pDCs on lupus,” said S. Ansar Ahmed, head of the Department of Biomedical Sciences and Pathobiology and paper co-author. “It’s too early to know how these changes are going to affect treatment, but these are the building blocks.”

The paper, “Cutting Edge: Plasmacytoid Dendritic Cells in Late-Stage Lupus Mice Defective in Producing IFN-α,” was published in the Journal of Immunology’s Cutting Edge section, which recognizes a small number of high-impact studies in the field.

The research team also included Xiaofeng Liao, a Ph.D. student in the Department of Biomedical Sciences and Pathobiology; Sha Sun of the Department of Developmental and Cell Biology at the University of California, Irvine; Jingjing Ren, volunteer-turned Ph.D. student in Luo’s laboratory; Alex Reihl, a senior majoring in biological sciences in the College of Science; Husen Zhang, assistant professor of civil and environmental engineering in the College of Engineering; and Christopher Reilly, professor and chair for cell and molecular physiology at the Edward Via College of Osteopathic Medicine.