Using innovative RNA sequencing techniques, researchers at the University of Maryland School of Medicine (UMSOM) Institute for Genome Sciences identified a promising novel treatment for lymphatic filariasis, a disabling parasitic disease that is difficult to treat. The potential new therapy is an experimental cancer drug called JQ1 and targets proteins found prominently in the worm’s genome; it appears to effectively kill the adult worms in a laboratory setting, according to the study which was published today in the journal mSystems.

Lymphatic filariasis affects over 120 million people worldwide, mostly in the tropics of Asia, Western Pacific and Africa and parts of the Caribbean and South America. Those in the U.S. who have the disease, which is spread by mosquitoes that carry the baby worms, were infected while traveling abroad. The disease leads to dysfunction of the lymph system, causing swelling in the limbs (lymphedema) and hardening of the arms and legs (elephantiasis) or swelling of the scrotum in men (hydrocele). Lymphatic filariasis is a leading cause of permanent disability worldwide, according to the Centers for Disease Control and Prevention. 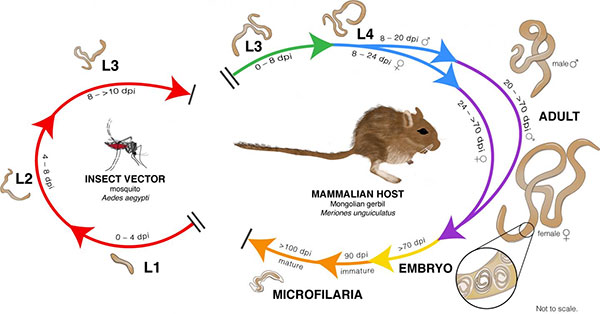 When a mosquito bites a person who has lymphatic filariasis, microscopic worms circulating in the person’s blood enter and infect the mosquito. When the infected mosquito bites another person, the microscopic worms pass from the mosquito through the skin, and travel to the lymph vessels. In the lymph vessels they grow into adults. An adult worm lives for about 5-7 years. The adult worms mate and release millions of microscopic worms, called microfilariae, into the blood. People with the worms in their blood can give the infection to others through mosquitoes.

While current treatments can reduce the risk of the disease being transmitted to other people, the CDC says it does not do much to alleviate symptoms. Studies suggest the antibiotic doxycycline can help manage mild to moderate lymphedema by killing the adult worms, but it must be given for four to six weeks in order to have any effectiveness.

“The drug JQ1 works by inhibiting bromodomain-containing proteins that are necessary for the adult worms to live,” said study author Julie Dunning Hotopp, PhD, Professor of Microbiology and Immunology at the Institute of Genome Sciences at the University of Maryland School of Medicine. “Based on our observations in the lab, we believe that this drug could be more effective than standard treatments at killing adult worms and may need to be administered only once.”

Working alongside Matthew Chung, PhD, a postdoctoral fellow in the Institute for Genome Sciences and co-author of the study, Dr. Dunning Hotopp used an RNA sequencing technique to identify genes in the parasitic worms that cause lymphatic filariasis. They identified an overrepresentation of genes that encode for bromodomain proteins. Based on those findings, they and their colleagues at the University of Wisconsin Oshkosh and at New England Biolabs decided to test JQ1, a bromodomain inhibitor, to see whether it would kill the adult worms, and they discovered that it was effective at killing them in the laboratory.

Their next step is to conduct preclinical studies to test JQ1 in rodents infected with the parasitic worms to see whether the drug can wipe out the infection. If successful, the drug could then be tested in human trials.

“While this research is still in its early stages, it highlights the ability of transcriptomics to identify potential new therapeutics,” said UMSOM Dean E. Albert Reece, MD, PhD, MBA, University Executive Vice President for Medical Affairs and the John Z. and Akiko K. Bowers Distinguished Professor. “I am eager to see the results of future research studies on this since patients with this neglected tropical disease are in dire need of more effective treatments.”