Hooded seals are capable of remarkable feats of diving, staying underwater for up to an hour at a time. Mariana Hoff and Andrej Fabrizius discuss their recent research, published in BMC Genomics, which looks at the molecular adaptations in the hooded seal brain which enables them to go without oxygen for such long periods. 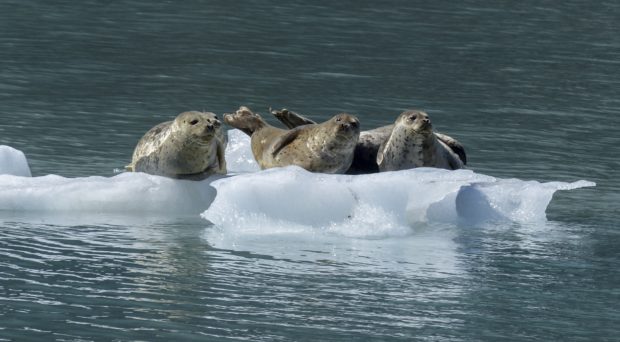 For most land living mammals, a lack of oxygen usually results in irreversible damage to the brain within a few minutes. One of the reasons why this happens is because this highly active tissue cannot cope with the imbalance between energy production and demand under oxygen deficient conditions (also known as hypoxia). On the other hand, the brains of diving mammals, such as whales and seals, may survive recurrent and extended periods of hypoxia caused by diving without damage.

To some degree, this cerebral tolerance is credited to the combination of behavioural, anatomical and physiological diving adaptations, such as a lowering of the heart rate and constriction of peripheral blood vessels. Far less studied are cellular and molecular adaptations in the brains of the diving mammals that possibly contribute to their hypoxia tolerance as well.

Evidence supporting the idea that cellular and molecular mechanisms do play a role arose from electrophysiological studies of brain slices from the hooded seal Cystophora cristata. This seal is an expert diver with recorded dives of up to 1 hour and depths of more than 1000m. When challenged with hypoxia in vitro, the neurons of this arctic phocid seal remained active for an extended period, while mice neurons died immediately.

In our article, we investigated the molecular adaptations of the hooded seal using RNA-sequencing (RNA-seq). We first obtained a transcriptome of the visual cortex of the hooded seal with more than 10,000 transcripts. Then, the mRNA levels were compared with those in the cortex of a close terrestrial relative, the ferret. We found in the seal brain a general reduction of the expression levels of genes related to energy metabolism. Most importantly, we identified two potential candidate genes which have an unusually high expression level in the seal brain and thus may contribute to its unusual hypoxia tolerance.

The highest mRNA level in seal cortex was found for clusterin (CLU), which is a chaperone with a variety of functions. For example, CLU interferes with the BAX-mediated apoptosis pathway, thereby promoting cell survival. The high level of CLU in the seal brain can be interpreted either as a preadaptation that protects it from the damage associated with dives or as a consequence of the stressful condition during or after a dive.

The largest difference in the mRNA levels between the hooded seal and the ferret brain was found for S100B, which is highly expressed in the seal brain. S100B is a Ca2+-binding stress protein with functions such as regulation of cell proliferation and activation of astrocytes during brain damage and diseases. Most interestingly, further comparative analyses of the available brain transcriptomes showed that S100B mRNA levels were also high in the minke and the bowhead whale, but low in terrestrial mammals. Thus, S100B seems to be component of a common adaptation mechanism that evolved convergently in whales and seals to better survive the reduced oxygen supply during dives.

However, this is not the end if the story. The functions of these two candidates in dive adaptation must be further investigated since, for example, S100B may also promote cancer, and CLU is involved in several neurodegenerative diseases in humans as well as being associated with aging.