Parkinson’s disease is the second most common neurodegenerative disease in the world, yet little is known about its causes and progression. To diagnose it early, make prognoses and develop therapies, biomarkers that indicate the development and course of the disease are needed. Bioinformaticians at Saarland University have been searching for such biomarkers, focusing on ribonucleic acids (RNA). In their study, which is now published in the journal ‘Nature Aging’, they show that the level of non-coding RNAs in the blood of a Parkinson’s patient can be used to track the course of the disease.

For their study, the team led by bioinformatics professor Andreas Keller and his doctoral student Fabian Kern created and analyzed the molecular profiles of more than 5,000 blood samples from over 1,600 Parkinson’s patients. This resulted in around 320 billion data points, which the researchers analyzed for biomarkers of Parkinson’s disease using artificial intelligence methods.

“Our project is among the largest RNA biomarker studies in the world,” says Andreas Keller, head of the research group for clinical bioinformatics at Saarland University and spokesperson for the Center for Bioinformatics at the Saarland Informatics Campus.

Of special interest was the level of a specific class of ribonucleic acids in the blood samples, so-called microRNAs. MicroRNAs are short, non-coding segments of RNA that play an important regulatory role in the translation of genetic information.

“Because microRNAs are stable in the bloodstream, contain diverse information for diagnosis and prognosis, and their influence on an organism’s genes has been well studied, we consider them promising candidates for robust biomarkers, also in the context of Parkinson’s disease,” says Fabian Kern, first author of the study and a doctoral student in Keller’s research group.

The group has already successfully identified microRNAs as diagnostic biomarkers for Alzheimer’s disease and lung cancer in other large-scale studies.

With regard to Parkinson’s disease, the bioinformaticians from Saarbrücken have now demonstrated that the disease progresses in particularly strong molecular waves during the third decade of life and from around the age of 70.]

“The indication for this effect is the increased concentration of deregulated microRNAs that we found in blood samples of the corresponding study cohorts,” explains Andreas Keller.

The researchers obtained the blood samples from one of the largest Parkinson’s studies in the world, the ‘Parkinson’s Progression Markers Initiative (PPMI)’ from the USA. Since the PPMI dataset is a longitudinal study, they were able to investigate in particular whether the concentration of microRNAs varies over the time axis and thus draw conclusions about the progression of the disease. The researchers replicated their results using independently collected samples from a second cohort of more than 1,000 patients provided to them by the Centre for Systems Biomedicine in Luxembourg.

In the current study, the bioinformaticians at Saarland University worked with whole blood analyses and examined the total concentration of microRNAs in all blood cells. In doing so, they were able to show that the information content of certain cell types varies depending on the subject’s age and stage of illness. 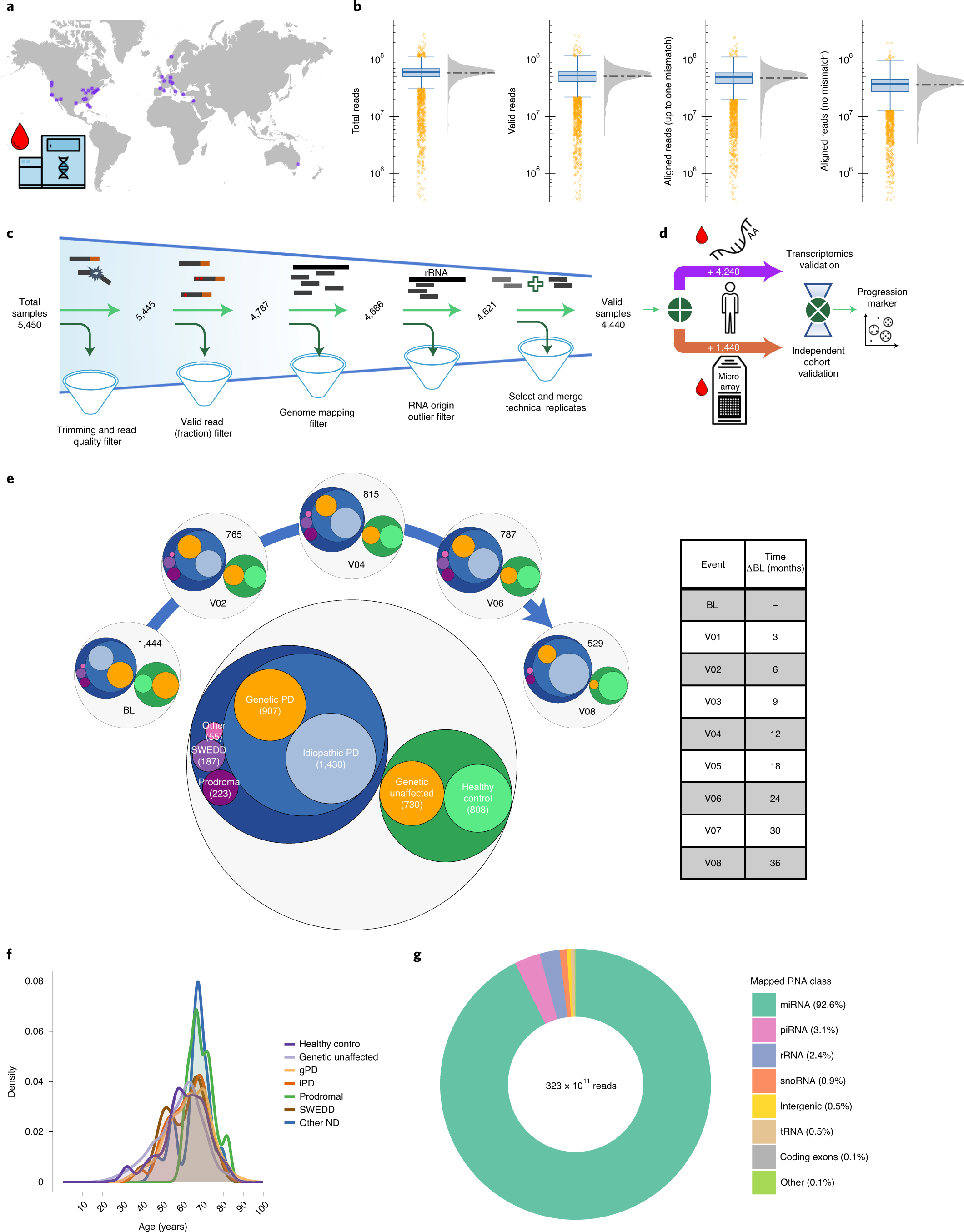 a, The PPMI project is a worldwide effort with 33 clinical sites (purple points) where whole-blood samples of patients and healthy control donors were initially drawn. b, After RNA extraction, library preparation and sequencing by a single vendor (HudsonAlpha), the sncRNA samples exhibit a high number of reads and a good quality in general. c, Several stringent filter criteria (from left to right) were applied to each sequencing sample to remove potential outliers, after which approximately 80% of all samples remained for downstream analysis. d, Further validation was performed using (1) paired mRNA-seq data from PPMI and (2) whole-blood microarray miRNA samples from the independent NCER-PD cohort. e, Distribution of valid samples from PPMI according to c across the investigated biogroups and time points (clinical visits) considered in this study. f, Age density distribution of samples across the biogroups shown in f. g, Separation of valid sncRNA-seq reads into their genome origins identifies human miRNA precursors as predominant source.

“In the future, we want to analyze the blood down to the single-cell level, which will allow us to make much more precise statements,” says Keller with regard to future research projects.

“The fact that our expertise in the field of microRNAs and bioinformatics is recognized on an international level and that we play a leading role in a predominantly American study shows the quality of research at the Saarland Informatics Campus,” says Andreas Keller.