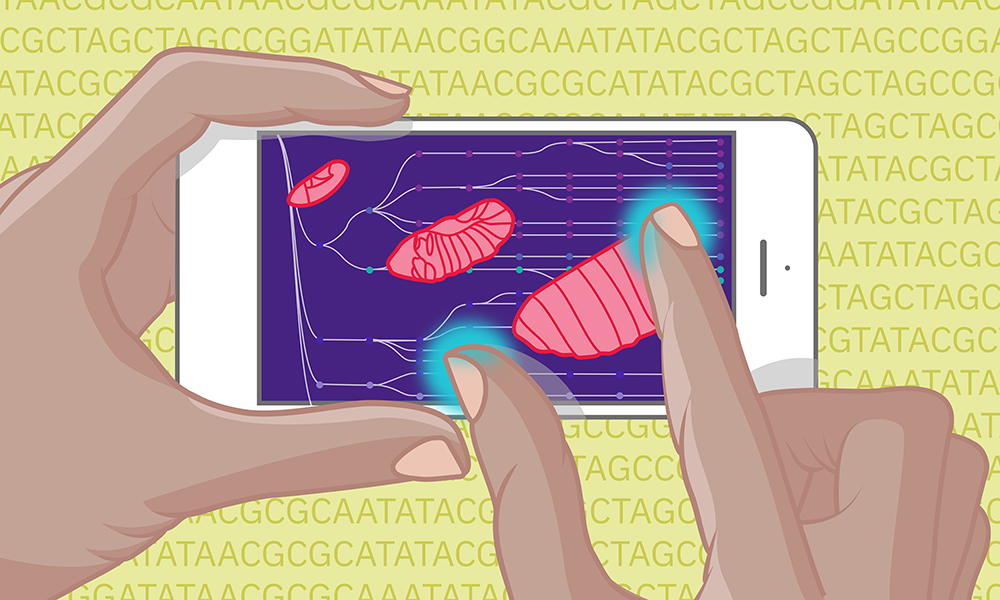 A new atlas that maps the continuum of embryo development in fruit flies has gone beyond, thanks to machine learning. Scientists can ‘zoom in’ on specific single-cell embryology of the fruit fly. Credit: Isabel Romero Calvo/EMBL

Scientists have constructed the most complete and detailed single-cell map of embryo development in any animal to date, using the fruit fly as a model organism.

Published in Science, this study, co-led by Eileen Furlong at EMBL and Jay Shendure at the University of Washington, harnesses data from over one million embryonic cells spanning all stages of embryo development and represents a significant advance at multiple levels. This fundamental research also aids scientists’ ability to pursue questions like how mutations lead to different developmental defects. In addition, it provides a path to understand the vast non-coding part of our genome that contains most disease-associated mutations.

“Just capturing the entirety of embryogenesis – all stages and all cell types – to obtain a more complete view of the cell states and molecular changes that accompany development is a feat in its own right,” said Eileen Furlong, Head of EMBL’s Genome Biology unit. “But what I’m really excited about is the use of deep learning to obtain a continuous view of the molecular changes driving embryonic development – down to the minute.”

Embryonic development begins with the fertilisation of an egg, followed by a series of cell divisions and decisions that give rise to a very complex multi-cellular embryo that can move, eat, sense, and interact with its environment. Researchers have been studying this process of embryonic development for over a hundred years, but only in the last decade have new technologies enabled scientists to identify molecular changes that accompany cell transitions at a single-cell level.

These single-cell studies have raised tremendous excitement as they demonstrated the complexity of cell types in tissues, even identifying new cell types, and revealed their developmental trajectories in addition to underlying molecular changes. However, attempts to profile the entirety of embryo development at single-cell resolution have been out of reach due to many technical challenges in sampling, costs, and technologies.

In this regard, the fruit fly (Drosophila melanogaster), a pre-eminent model organism in developmental biology, gene regulation, and chromatin biology, has some key advantages when it comes to developing new approaches to address this.  Fruit fly embryonic development occurs extremely rapidly; within just 20 hours after fertilisation, all tissues have formed, including the brain, gut, and heart, so the organism can crawl and eat. This, in combination with the many discoveries made in fruit flies that have propelled understanding of how genes and their products work, encouraged the Furlong lab and their collaborators to take on this challenge.

“Our goal was to obtain a continuous view of all stages of embryogenesis, to capture all of the dynamics and changes as an embryo develops, not just at the level of RNA but also the control elements that regulate this process,” said co-author Stefano Secchia, a PhD student in the Furlong group.

In 2018, the Furlong and Shendure groups showed the feasibility of profiling ‘open’ chromatin at single-cell resolution in embryos and how these DNA regions often represent active developmental enhancers. ‘Enhancers’ are DNA segments that act as control switches to turn genes on and off. The data showed which cell types in the embryo are using which enhancers at a given time point and how this use changes over time. Such a map is essential to understand what drives specific aspects of embryonic development.

“I got really excited when I saw those results,” Furlong said. “To go beyond RNA to look upstream at these regulatory switches in single cells was something I didn’t think would be possible for a long time.”

The 2018 study was state-of-the art at the time, profiling ~20,000 cells in three different windows of embryo development (at the start, middle, and end).  However, this work still only gave snapshots of the cellular diversity and regulation during specific discrete time points. The team therefore explored the potential of using samples from overlapping time windows, and as a proof-of-principle, applied the concept to one specific lineage – the muscle.

This then set the stage to scale up dramatically using new technology developed in the Shendure lab.  The team’s current work profiled open chromatin from almost one million cells and RNA from half a million cells from overlapping time-points that span the entirety of fruit fly embryo development.

Using a type of machine learning, the researchers took advantage of the overlapping time-points to predict time at a much finer resolution.  Co-author Diego Calderon, a postdoctoral researcher in the Shendure lab, trained a neural network to predict the precise developmental time for every cell.

“Even though the collected samples contained embryos with slightly different ages within a 2- or 4-hour time window, this method allows you to zoom in to any part of this embryogenesis timeline at a scale of minutes,” Calderon said.

Shendure added, “I was amazed how well this works. We could capture molecular changes that occur very rapidly in time, in minutes, which previous researchers had uncovered by handpicking embryos every three minutes.”

Characterizing the continuum of Drosophila embryogenesis

We collected staged Drosophila embryos from overlapping time windows across the first 20 hours of embryogenesis. Then we extracted nuclei and performed single-cell RNA sequencing (RNA-seq) and assay for transposase-accessible chromatin using sequencing (ATAC-seq) profiling using combinatorial indexing (sci-RNA-seq and sci-ATAC-seq) to comprehensively map expressed genes and putatively active regulatory elements. We applied machine learning to infer a continuum of nuclear ages that is synchronized across unfolding lineages in absolute time. The continuous nuclear age predictions were used to annotate and then link cellular states at nonoverlapping 2-hour intervals, as well as to explore transcriptional regulatory dynamics across major cell lineages of embryonic development at fine-scale temporal resolution.

In the future, such an approach would not only be time-saving but can serve as a reference for normal embryo development to see how things might change in different mutant embryos.  This could pinpoint exactly when, and in which cell type, a mutant’s phenotype arises, as the researchers showed in the muscle.  In other words, this work not only helps to understand how development normally occurs but also opens the door to understanding how different mutations can mess it up.

The new predictive potential that this research portends, based on samples from much larger time-windows, could be used as a framework for other model systems. For example, mammalian embryo development, in vitro cell differentiation, or even post drug treatment in diseased cells, where gaps in sampling times can be designed to facilitate optimal time prediction at a finder resolution.

“Combining all the new tools at our disposal in single-cell genomics, computation, and genetic engineering, I would love to see if we could predict what happens to individual cell fates in vivo following a genetic mutation,” Furlong said. “…but we’re not there yet.  However, before this project, I also thought the current work wouldn’t be possible any time soon.”