A new study has determined the genetic codes of healthy and diseased human lung cells, a finding that may allow doctors to better diagnose and follow idiopathic pulmonary fibrosis (IPF) progression, as well as advance treatments for the disease.

Published in the Journal of Clinical Investigation Insight, the study, “Single-cell RNA sequencing identifies diverse roles of epithelial cells in idiopathic pulmonary fibrosis,” is believed to be the first single-cell genetic investigation uncovering four distinct epithelial lung cell types, each with specific genetic characteristics, making this a promising tool to further examine the pathogenesis of IPF.

Researchers analyzed normal and IPF human lung tissues through a technique called single-cell RNA sequencing, which allows scientists to determine the RNA sequences present in a cell, ultimately offering a “genetic blueprint” of the cell. 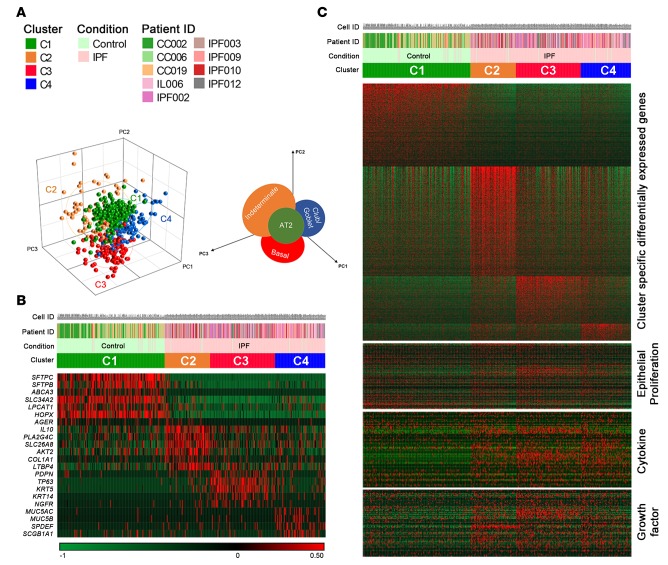 However, AT2 expression was abnormal in the remaining three cell types (IPF cells). Instead, these cells exhibited the expression of genes important for epithelial proliferation, “response to cytokines” (important signaling molecules) and “response to growth factors.” IPF basal cells showed the greatest deviation from normal epithelial lung cells, with an increase in “wound healing” genes, among other factors.

Based on their results, the authors suggested that respiratory epithelial cells undergo differential stages in IPF, and that these cells seemed to have lost the normal genetic control systems needed to ensure the development of functional, mature lung cells, such as AT2 cells.

“In the present study, we identify profound changes in epithelial cell gene expression at the single-cell level of resolution in IPF. Our findings identified the activation of a number of canonical signaling and transcriptional pathways associated with cell injury and repair in IPF and identify IPF-related epithelial cells of indeterminate differentiation,” the researchers wrote. “Our present single-cell data support the concept that an abnormal differentiation program has been initiated in the tissue microenvironment of IPF … with many respiratory epithelial cells acquiring aberrant, multilineage-like states.”

The team believes that identifying these abnormalities in gene patterns may lead to the development of new, targeted therapies and help in disease diagnosis.

“This paper identifies a number of novel targets and molecular pathways for IPF, for which there are pharmaceutical approaches,” said Jeffrey Whitsett, MD, lead investigator and co-director of the Perinatal Institute at Cincinnati Children’s Hospital, adding that airway cells “can be obtained by brushing the airway or biopsy, and marker genes can be tested to make a diagnosis or monitor treatment.”