A technique to map the differing response of Salmonella to conditions in the human body has been uncovered by scientists.

The study has implications for the future design of drugs and vaccines to be specifically targeted against the strategies used by Salmonella to become active inside the human body.

Salmonella was exposed to 22 lab environments that mimic conditions found in humans to see the effects on individual genes in the bacteria.

S. Typhimurium can adapt its transcriptional program within four minutes when it encounters a new environment, according to Rolfe et al (2012).

The researchers from the University of Liverpool and Trinity College Dublin examined the effect of these environments on the 4,742 genes in the bacterium and determined which conditions ‘turned on’ each gene.

However, the complexity of transcription in a bacterial pathogen and the effect of environments encountered during infection still need to be established.

The results reveal the details of gene expression that is required when Salmonella infects people.

Exposure to oxygen-limited conditions causes the activation of genes which enable the bacteria to stick a syringe-like structure into the gut wall to cause diarrhoea.

Once inside the lining to the gut, immune defence chemicals prompt it to be engulfed by macrophages – the cells that normally kill bacteria, said the researchers.

However, the bacteria have evolved to thrive inside the protective cells, by switching on genes that neutralise the lethal abilities of
macrophages.

Doctors are reluctant to use antibiotics to treat Salmonellosis to avoid creating resistant strains of the bacterium.

RNA-seq has become the best tool to study bacterial transcriptomes because of its high resolution, reliability, and dynamic range, said the study funded by Science Foundation Ireland and the University of Liverpool.

They developed an approach to identify most bacterial promoters and sRNAs, by pooling RNA from different growth conditions to create two cDNA libraries (dRNA-seq and RNA-seq).

Salmonella microbes enter the stomach, and intestine, and then invade human cells. The changing environments were mimicked by altering levels of acidity, oxygen, different temperatures and nitric oxide in lab experiments.

“During infection of a host, Salmonella encounters many different and changing environments to which the bacteria must adapt,”said the researchers.

The data show that 86% of Salmonella genes are expressed in at least one environment. 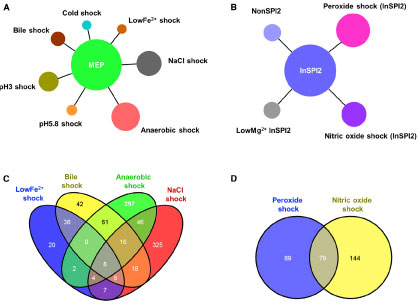 The method is transferrable to all bacteria and more diseases could be studied using the same approach.