Single cell RNA-sequencing is a recently developed technique that allows studying the biological function of different types of cells, one cell at a time. This method is a focus area at the Bioinformatics Core Facilities. Bioinformatician Vanja Börjesson has recently been involved in supporting a research project that resulted in new findings on the field of perinatal brain injury, showing that the neonatal meninges contain almost all known types of immune cells.

Why is this a suitable technique for studying perinatal brain injuries?

“The main goal with the study was to see how perinatal brain injury effect the meningeal leukocytes and other cell types on a transcriptional level in neonatal mouse. For this task, single cell RNA-sequencing is the perfect method to use due to its ability to identify different cell types within one sample and then to compare the gene expression profiles for this specific cell type between samples, in this case between injured and normal samples, and between neonatal and adult samples.”

In short, what did the data show?

“With all this information we could establish developmental differences between neonatal and adult cells, and we could also see that most meningeal immune cell populations were not affected by perinatal brain injury.” 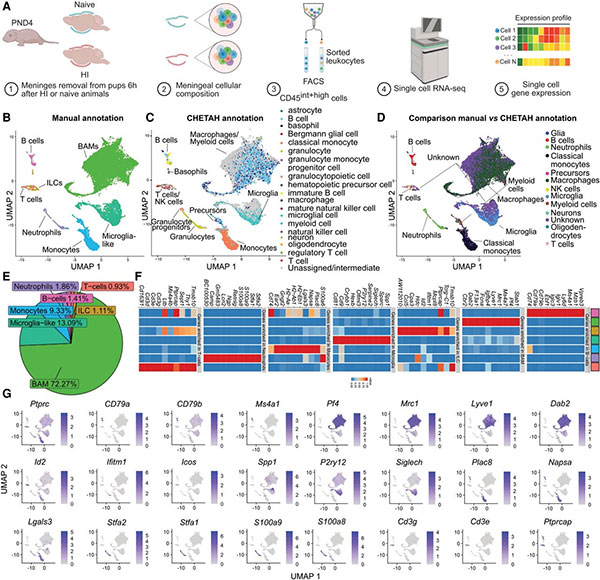 (A) Dissection of the meninges from PND4 naïve mice and at 6 h after HI, and the schematic overview of the 10X Chromium scRNA-seq procedure (created with Biorender.com). (B,C) Uniform manifold approximation and projection (UMAP) plot generated using Seurat (B) or CHETAH (C). Confidence score >0.1. (D) Overlay of CHETAH annotations in the Seurat UMAP. (E) Numbers expressed as percentages of each cell population among the total neonatal meningeal leukocytes. (F) Heat map showing the signature gene expression for each cluster identified in B. (G) UMAP showing the expression of some signature genes present in the heat map.

As Bioinformatician, what was your role in the project?

“I joined the project after the experimental design and wet lab step was done. The project needed help with the analysis of the big amount of raw data generated from the sequencer machine. My part in the project was not only to perform all bioinformatic analyses, but also to participate in the discussions about what analyses to do, what comparisons to do, which methods to use, and what data to include or exclude.”

“I think the most important part of my job is to interpret the results and explain it to a non-bioinformatician or to someone who is not used to this kind of data.”