To uncover the landscape of translation in plants in response to drought stress, researchers from the China Agricultural University performed the recently developed ribosome profiling assay with maize seedlings growing under normal and drought conditions. Comparative analysis of the ribosome profiling data and the RNA-seq data showed that the fold changes of gene expression at transcriptional level were moderately correlated with that of translational level globally (R2 = 0.69). However, less than half of the responsive genes were shared by transcription and translation under drought condition, suggesting that drought stress can introduce transcriptional and translational responses independently. The researchers found that the translational efficiencies of 931 genes were changed significantly in response to drought stress. Further analysis revealed that the translational efficiencies of genes were highly influenced by their sequence features including GC content, length of coding sequences and normalized minimal free energy. In addition, they detected potential translation of 3,063 upstream open reading frames (uORFs) on 2,558 genes and these uORFs may affect the translational efficiency of downstream main ORFs. 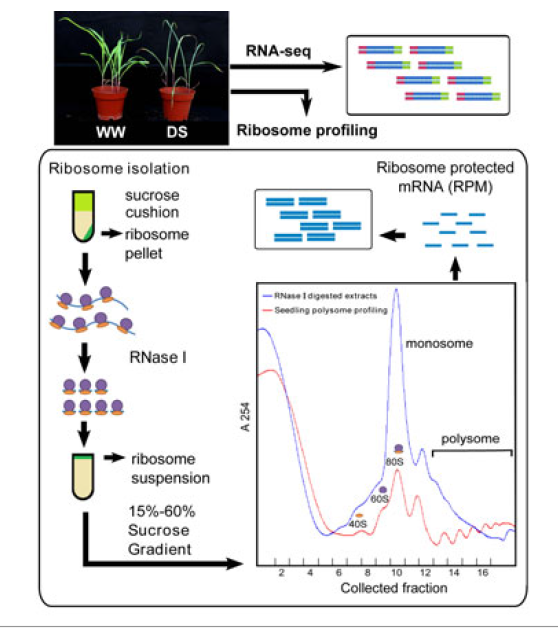 This study indicates that plant can respond to drought stress with highly dynamic translational mechanism, that acting synergistically with that of transcription.