from University of Chicago, Science Life by Kevin Jiang 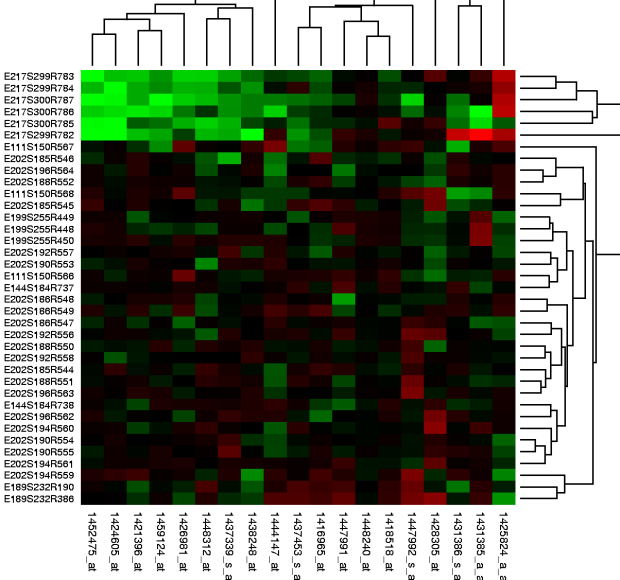 Heat maps of gene expression values show how experimental conditions influenced production (expression) of mRNA for a set of genes. This type of information might be yielding less information about proteins than previously thought.

The majority of RNA expression differences between individuals have no connection to the abundance of a corresponding protein, report scientists from the University of Chicago and Stanford University in Science on Dec. 18. The findings point to a yet-unidentified cellular mechanism that regulates gene expression and suggest studies that rely only on RNA measurements to characterize gene function require further analysis.

“The chief assumption for studies of RNA differences is that they ultimately reflect differences in an end product, which is protein,” said senior study author Yoav Gilad, PhD, professor of human genetics at the University of Chicago. “But it turns out in most cases this may not be true.”

For a gene to be expressed, information in DNA is copied onto messenger RNA (mRNA), which are the direct templates used to create proteins – the structural components and molecular machines for almost every function in a cell. Differences in mRNA levels between individuals are thought to affect how much protein is produced from a gene, and therefore reflect gene expression. However, this relationship has never been fully described.

Gilad and former UChicago researcher Jonathan Pritchard, PhD, now professor of genetics and biology at Stanford University, together with their colleagues, mapped regulatory quantitative trait loci (QTL) – genomic regions linked to differences between individuals in regulatory traits such as gene expression. They compared QTLs for mRNA and protein expression levels for more than 4,000 genes.

The team confirmed variation in QTLs led to different levels of mRNA for a large number of genes. Yet, only one-third showed an accompanying change in protein levels. The majority of QTLs that affected mRNA levels did not have any effect on the amount of corresponding protein.

To search for a potential mechanism for this phenomenon, the team looked at whether QTLs affected the rate at which ribosomes, the cellular machines responsible for creating proteins, functioned. They found QTL variation caused changes to ribosome function similar to mRNA levels, but the majority still did not affect protein abundance. Gilad and his colleagues hypothesize a yet-unidentified buffering mechanism prevents dramatic shifts in protein levels when mRNA levels and ribosome function are in flux.

“Our observations point to a previously under-appreciated property of gene regulation, namely widespread buffering of protein levels so that a cell can sustain some amount of RNA variation without it affecting proteins,” Gilad said. “This appears to be a common phenomenon and motivates us to look for the mechanisms that can account for it.”

Their findings also suggest many existing studies might require additional scrutiny, since mRNA-linked QTLs have been frequently used to identify genes and attribute them to complex diseases, from cancer to diabetes.

”This underscores the importance of being cautious,” Gilad said. “We need to make sure that genes we think are important for disease or that give us insight into biology are linked to protein products and not just RNA.”