Embryonic stem cells (ESCs) have the capability to repress both the exogenous and endogenous proviruses. These proviruses are are an integral part of the host genome and these parasitic elements form upto 10% of mouse genome. Despite their presence the embryonic stem cells can effectively repress these viruses. How exactly do they do it? A few earlier studies showed that this proviral silencing occurs by DNA methylation and independent regulation by histone methyltransferases.

A study by scientists at Institute of Molecular and Cell Biology at A*STAR, Singapore published earlier this month in the journal Cell performed a systematic small interfering RNA (siRNA) screen throughout the genome for 20,000 genes to identify the key regulators of proviral silencing. They employed the provirus mouse megalovirus-green fluorescent protein (MMLV-GFP) and carried out systematic genome-wide siRNA knockdown in mouse ESCs. The genome-wide siRNA screen narrowed down to 303 determinants and the crucial ones were found to be histone chaperone proteins, sumoylation factors and chromatin modifier proteins. RNA-seq analysis proved the implication of the histone chaperone Chaf1a/b and sumoylation factor Sumo2 in addition to the previously established Eset to be key players in the process of proviral silencing. 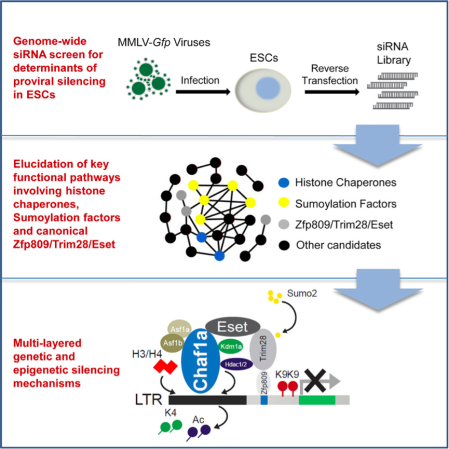 Candidate genes were then selected using the cTEN database to check for cell type enrichment and cross-referenced by their qPCR analyses. The identified factors were found to be stem cell-specific in expression with the differentiated cells expressing low levels of these factors. Network analysis on these candidate genes showed greater interaction between the top 50 candidate genes among the 303 identified. Further siRNA and shRNA knockdowns in mouse ESCs, differentiated fibroblast cell lines like 3T3 and MEFs showed that these knockdowns were only effective in proviral silencing in the ESCs and not in the differentiated cells as the MMLV-driven fluorescent protein expression was undeterred in these cells even upon candidate gene knockdown.

They further interrogated the functional attributes these candidate genes could mediate during the proviral silencing. Genome-wide RNA-sequencing of various candidate-gene depleted cells further delineated their regulatory roles on endogenous retroviruses (ERV). The transcriptomic analysis showed that there was a reactivation of the ERV elements upon ablation of the candidate gene expression. Further chromatin immunoprecipitation-sequencing (ChIP-Seq) analysis showed that Chaf1a and Sumo2 are recruited to the loci of several ERV elements.

This new study reveals factors crucial for provirus silencing in embryonic stem cells. It also identified differential regulation of individual factors on different classes of ERVs and non-ERV elements based upon their co-regulators. Dr Jonathan Loh, the corresponding author commented that, “With the new insights, we can better identify the good stem cells and use them more efficiently and safely in clinical therapies. We can also devise diagnostic approaches by studying the activities of the virus DNA within stem cells in various diseased conditions.” In summary, this study shows that ESCs use complex, multiple, multi-layered pathways in the regulation of ERV elements that culminate in effectively silencing the provirus.