Even though diseases of the brain vasculature are some of the most common causes of death in the West, knowledge of these blood vessels is limited. Now researchers from Uppsala University and Karolinska Institutet in Sweden present in the journal Nature a detailed molecular atlas of the cells that form the brain’s blood vessels and the life-essential blood-brain barrier. The atlas provides new knowledge regarding the functions of the cells and the barrier, and clues to which cell types are involved in different diseases.

The vasculature of the brain is, like elsewhere on the body, made up of arteries, veins and thin, intervening vessels called capillaries through which the main exchange of oxygen, nutrients and waste products takes place. However, the vessels of the brain differ from others in one important respect – the so-called blood-brain barrier, which acts as a filter that blocks certain substances from passing through the vessel walls, thus protecting the brain from potentially toxic products while letting through whatever it needs for its structure and function.

“It is becoming increasingly clear that a fully functional blood-brain barrier is essential to brain health and that a dysfunctional barrier is a factor of many brain diseases,” says study leader Christer Betsholtz, professor at Uppsala University and Karolinska Institutet. “The structure of the blood-brain barrier hasn’t been fully known, and so a detailed atlas of the brain’s vasculature and its barrier functionality is needed.”

Using a relatively new technique called single cell RNA sequencing, the researchers have produced a cellular and molecular atlas of the mouse brain vasculature. The blood vessels were broken apart in individual cells, which were then, one by one, mapped in accordance with their gene expression patterns and compared. The basic cell type and any gradual specialisations could then be ascertained for each cell. Finally, the molecular map was matched with the corresponding anatomy in tissue analyses using specific markers.

“For the first time we’ve been able to show in detail how the blood-brain barrier differs among the various types of brain blood vessels,” says lead author Michael Vanlandewijck, assistant professor at Uppsala University and Karolinska Institutet and director of the Single Cell Analysis Unit at Karolinska Institutet’s and AstraZeneca’s Integrated Cardio Metabolic Centre (ICMC). 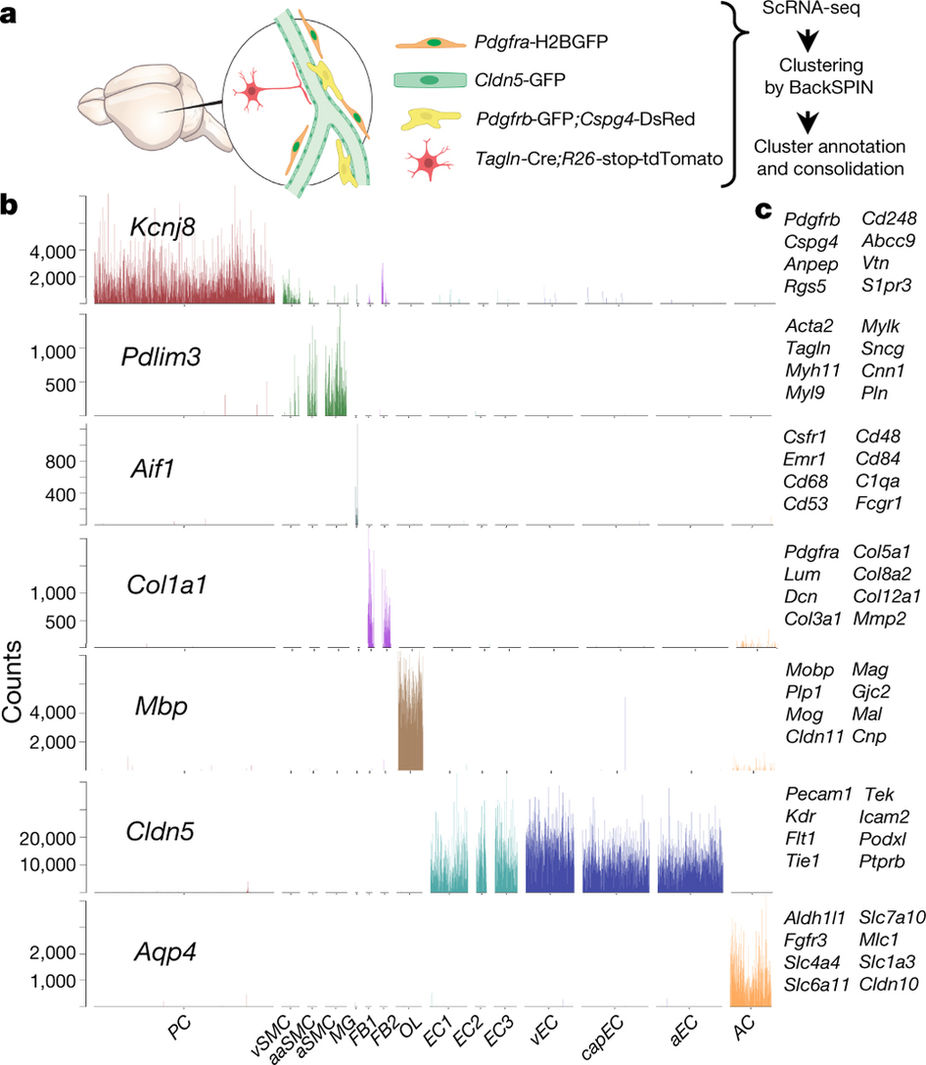 It was long thought that the blood-brain barrier was made up of specialised endothelial cells in the blood vessels; the new study shows, however, that there are probably many other types of cells involved in the maintenance of the blood-brain barrier as well, including cells called pericytes in the capillary walls. The researchers were also able to establish the molecular identity of another cell type in the vascular wall, a kind of connective tissue cell located in a narrow space just outside the brain’s blood vessels.

“This space has been posited to act as the brain’s lymph system, so it’ll now be incredibly interesting to study these cells further using the markers we’ve found,” says Dr Vanlandewijck.

The atlas means that a number of genes with known or presumed function in different brain diseases can now be associated with specific cell types in the brain’s vasculature.

“We already have results indicating that many more cell types than previously thought are involved in neurovascular diseases such as Alzheimer’s and brain tumours,” says Professor Betsholtz. “We’re now able to study this systematically in different diseases with the same type of analyses as we’ve used here.”