From Friedreich’s Ataxia News by Patricia Inacio – A group of researchers compiled a database of small RNAs that circulate in the blood of Friedreich’s ataxia (FA) patients with different disease symptoms.

Researchers hope this resource will assist research into FA’s mechanisms and possibly identify biomarkers of disease progression and patients’ response to treatment.

The study, “Small RNA-seq analysis of circulating miRNAs to identify phenotypic variability in Friedreich’s ataxia patients,” was published in the journal Scientific Data.

They then performed an RNA sequencing (RNA-seq) analysis to identify all of the small RNAs present in each group of FA patients and compared it with the control group.

MicroRNAs are small RNA molecules composed of only about 22 units (nucleotides), but their role in human health and disease is largely recognized, mostly because they are fine-tuned regulators of gene expression. MicroRNAs have been proposed as biomarkers for several diseases, including cancer and neurodegenerative diseases.

Overview of the study design 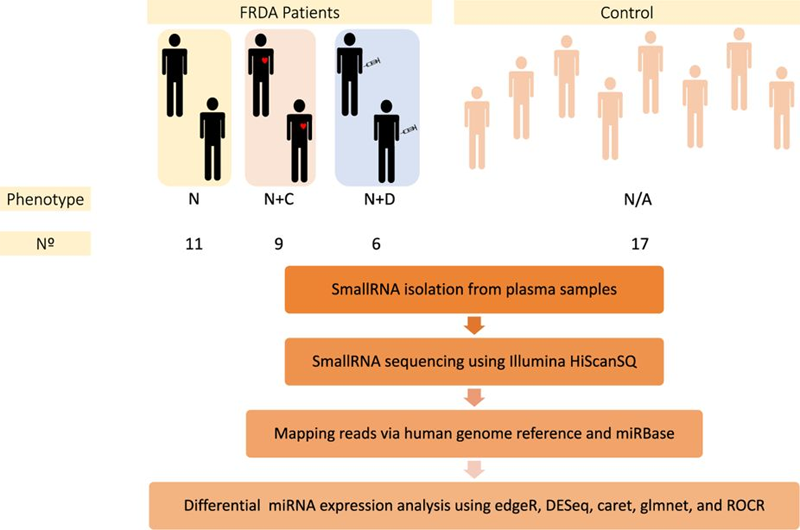 In a previous study, researchers performed a profiling of small RNAs, including microRNAs, from FA patients and healthy controls. The idea, researchers explained, was to “identify different miRNA signatures that could explain physiological and molecular pathways underlying this disease and to help determine the phenotypic variability of patients.”

They found seven microRNAs that were differently expressed in FA patients’ blood samples versus healthy samples. They also suggested that a specific microRNA — called miR323a-3p — is a biomarker for FA patients with cardiomyopathy (heart disease), as its levels were significantly higher in these patients than in those without this condition.

The newly developed database could be a useful resource for Friedreich’s ataxia researchers to identify potentially noteworthy microRNA signatures for further research and possible new therapeutics.

“We have provided a small RNA-seq data resource on FRDA [Friedreich’s ataxia] patients, which is useful to understand phenotypical variability of the disease. Furthermore, the data resource provides an opportunity to identify the biomarkers of diagnosis, prognosis, and treatment monitoring in FRDA,” the study concluded.