From Genetic Engineering News  –  A research team headed by scientists at the Francis Crick Institute in London, U.K., has developed and validated a 20-gene signature that can discriminate active tuberculosis (TB) from latent tuberculosis infection (LTBI) and can also predict if an asymptomatic, infected individual will go on to develop active TB. The research, including a small, prospective study involving 53 TB patients in the U.K. and their close contacts, could help develop strategies for diagnosing and treating TB-infected individuals before they develop symptoms, and before they pass the infection on to others.

“Treating active TB before symptoms start could spare patients and their families from unpleasant symptoms, reduce the spread of disease, and offer peace of mind to people who are not going to develop active TB,” explains Anne O’Garra, Ph.D., group leader at the Francis Crick Institute, and senior author of the team’s published paper in Nature Communications. “This study was a promising proof of principle, offering new insights into how to develop gene signatures for active TB. The next step will be to develop and test different gene signatures in larger groups of people, with the aim of being able to offer validated tests to patients within the next decade.”

The Francis Crick researchers, working in collaboration with scientists at the University of Leicester, U.K., BIOASTER and bioMerieux in France, and the University of Cape Town in South Africa, describe their findings in a paper entitled “A Modular Transcriptional Signature Identifies Phenotypic Heterogeneity of Human Tuberculosis Infection.”

Modular transcriptional signatures of TB and other diseases 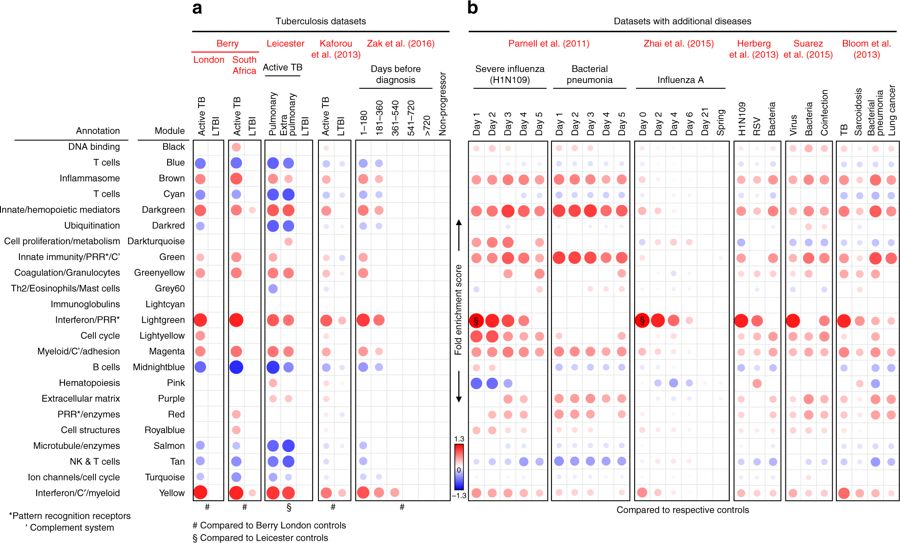 a Twenty-three modules of co-expressed genes derived using WGCNA from Combined Berry dataset (London and South Africa) and tested in other TB datasets, and b datasets with additional diseases. Fold enrichment scores derived using QuSAGE are depicted, with red and blue indicating modules over- or underexpressed, compared to the controls. Colour intensity and size represent the degree of enrichment, compared to the controls. Only modules with fold enrichment scores with FDR p-value < 0.05 were considered significant and depicted here. §, fold enrichment scores in the lightgreen module greater than the maximum score depicted on the scale (i.e. >1.3) in severe influenza (Parnell et al, score: 1.55) and influenza A (Zhai et al, score: 1.97)