The World Health Organization estimates that 78 million people worldwide are infected with gonorrhea each year. Men with infections tend to have obvious symptoms while women are often asymptomatic or experience mild symptoms. In both men and women, the infection usually clears with antibiotic treatment.

In the last decade, however, there has been an emergence of strains of antimicrobial-resistant Neisseria gonorrhoeae, the bacterial pathogen responsible for gonorrhea, and in 2013, the Centers for Disease Control and Prevention listed drug-resistant N. gonorrhoeae as an urgent public health threat.

In a new NIH-funded pilot study published today in mSphere, a team led by researchers from Tufts University School of Medicine conducted the first full comparison of gonococcal gene expression and regulation in both men and women infected with N. gonorrhoeae, identifying gender-specific signatures in infection and in antibiotic resistance genes.

“We built on our earlier work on gene expression during infection in females to include both genders in the present analysis, so we see for the first time the expression profiles during active disease in males and their asymptomatic partners,” Caroline A. Genco, Ph.D. (Anna Miller/Tufts University)said Caroline A. Genco, Ph.D., Arthur E. Spiller Professor and Chair of the Department of Immunology at Tufts University School of Medicine and senior and corresponding author of the study. “We found that when the bacteria are infecting the male, it’s a different gene expression profile compared to when they are infecting the female. When you consider how fundamentally different the two host environments are, this makes sense.”

Until now, infection has been primarily studied in tissue culture, male human models, and mice. While these studies have provided some key information on interactions between the bacteria and the host, “they have important limitations, namely the absence of the female response in humans,” Genco added. “Studying active, natural infection in both men and women is critical to develop strategies to treat and prevent infection.”

To understand the disease in both genders, the team looked at disease manifestation in a cohort of subjects attending a clinic that treats sexually transmitted infections in a country where there are high rates of gonorrhea and antibiotic resistance. Specimens were collected from males who went to the clinic for treatment for gonorrhea and from the female partners who came in for treatment following confirmation of their partner’s diagnosis.

The researchers used RNA-sequencing to identify what host and bacterial genes are expressed during mucosal infection.

Comparison of N. gonorrhoeae gene expression during infection in men and women in vivo 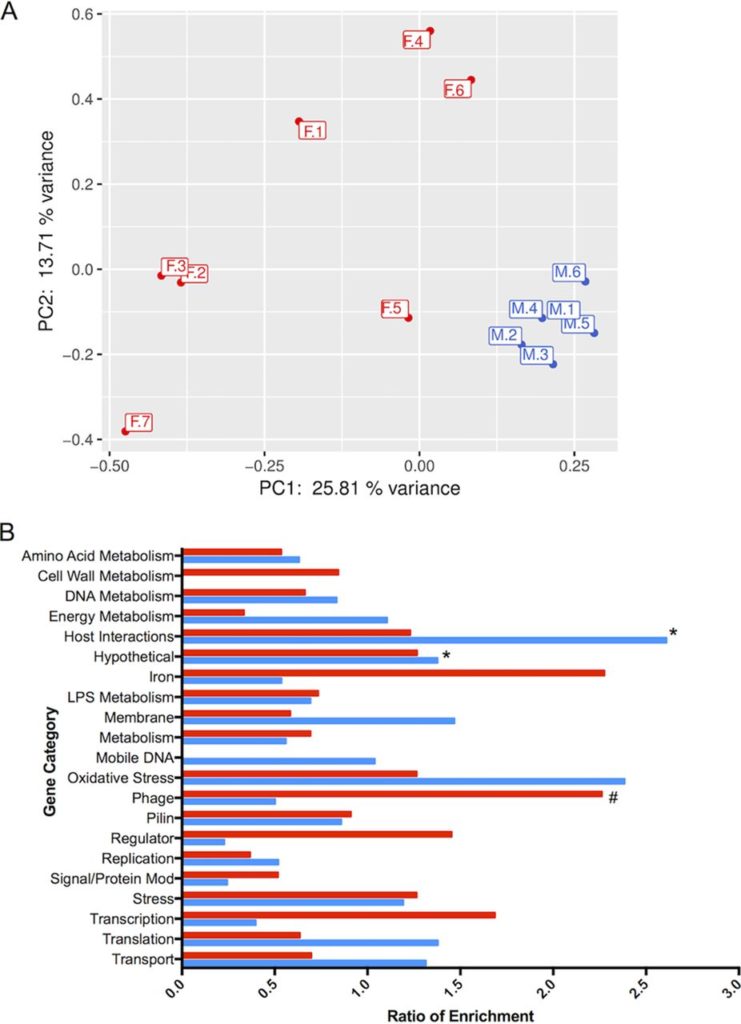 The researchers note that limitations include the small sample size and the potential variance in stages of infection in the male subjects compared to the female. A larger-scale study employing additional genetic analysis is currently underway.