In the Journal of Clinical Investigation, UNC Lineberger researchers published their analysis of the genetic differences they discovered in patients’ primary breast cancers and their metastatic cancers.

Breast cancer is the second leading cause of cancer death in women in the United States, with most deaths caused by the cancer spreading beyond the breast. In a new study, University of North Carolina Lineberger Comprehensive Cancer Center researchers have identified genetic clues that explain how breast cancer spreads, or metastasizes – findings that may lead to better treatments or approaches to prevent its spread at the onset.

In the Journal of Clinical Investigation, the researchers published their analysis of the genetic differences they discovered in patients’ primary breast cancers and their metastatic cancers. By understanding how breast cancer metastases evolve, researchers hope to better explain how they occur. This insight could reveal new approaches in the treatment and prevention of metastatic breast cancer.

“This was a very difficult study to do, but it allowed us to take a snapshot of both the primary tumor, and the tumor after it had spread, in order to trace its evolution,” said the study’s first author Marni Siegel, a graduate student in the UNC MD/PhD program.

Using data drawn from the UNC-Chapel Hill Breast Cancer Tumor Donation Program, the researchers analyzed DNA and the gene expression patterns in both the primary tumor and matched metastatic cancers from 16 patients. One of the major findings was that the cancer typically did not spread outside the breast as a single cell. Instead, researchers found that, based on the genetic patterns, a collection of cells most likely broke away.

“When it spreads, breast cancer often does not spread as a single cell, but rather as a collection of cells that may have different genes driving them,” Siegel said. “The metastases in distant organs reflect the diversity that is seen in the original breast cancer.”

Siegel said this finding has implications for treatment. If metastatic cancers are most often made up of cells with different genetic drivers, perhaps researchers should be targeting the primary tumor with multiple drugs to contain the cancer.

“We may need more than one drug in order to effectively target these different genetic drivers that we found,” Siegel said.

Another major finding was that the many of the genetic drivers — or the genetic changes responsible for the aggressiveness in the tumor — occurred in the primary tumor, and were maintained in the metastases.

“A lot of the genes that cause the original cancer are also potentially responsible for the metastatic process, and the cancer may not need to acquire new traits to be able to spread to distant sites,” said UNC Lineberger’s Charles M. Perou, PhD, the May Goldman Shaw Distinguished Professor of Molecular Oncology, and a professor of Genetics and Pathology & Laboratory Medicine.

Overview of the study methods 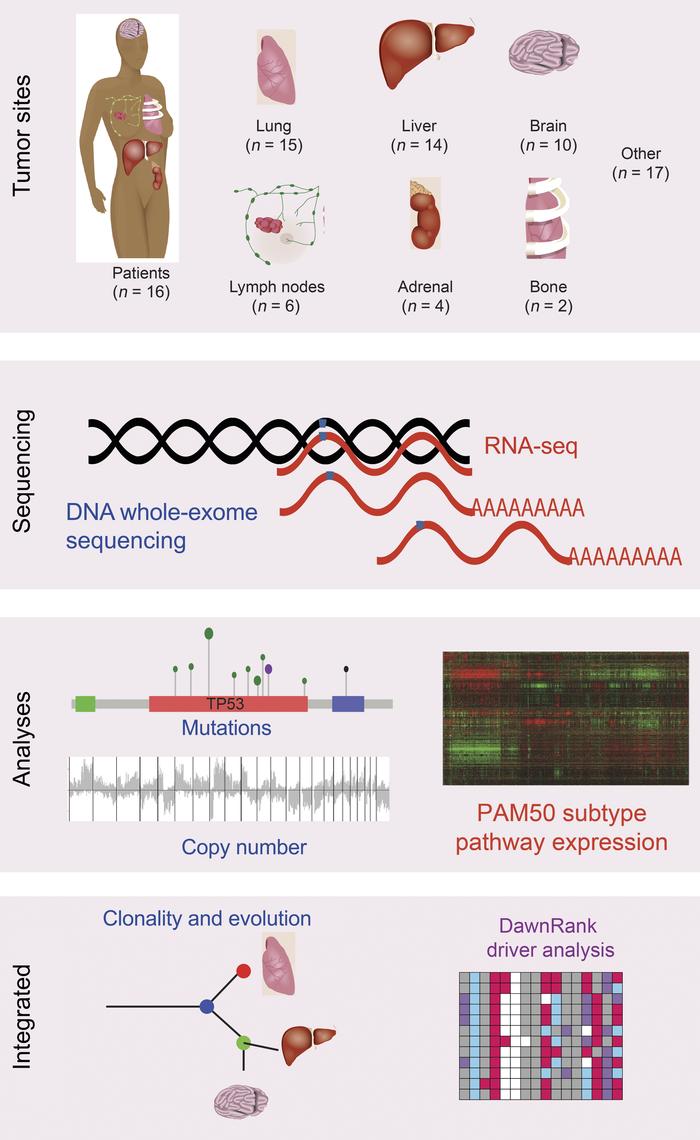 The researchers said the findings may suggest that treatments used at the outset may also prevent the cancer’s spread.

“A deeper analysis of the primary tumor may be all we need to prevent metastases,” said UNC Lineberger’s Lisa A. Carey, MD, physician-in-chief of the N.C. Cancer Hospital and the Richardson and Marilyn Jacobs Preyer Distinguished Professor in Breast Cancer Research, who leads the Tumor Donation Program. “If you can get a better handle on the biology of the primary tumor, and the elements of the tumor that may be more or less dangerous, then you don’t need to worry about testing every single metastasis for treatment decisions.”

Through their analysis, the researchers determined the genetic alterations found in both the primary tumors and the metastases frequently were a type of genetic abnormality called a copy number alteration, which is when sections of DNA are repeated (i.e. duplicated). Often it was genes involved in cellular metabolism that were upregulated. Since cells inside tumors are isolated from the blood supply, they must adapt to rely on alternative methods of energy usage and production.

“We saw frequent copy number changes, and gene expression changes in metastases that reflect a change in metabolism,” Siegel said. “These tumors are genetically very complex, and we demonstrated this by showing just the sheer volume of copy number changes, and that there are multiple clones in a single metastases tumor, and changes in metabolism that reflects the tumor’s ability to adapt.”

Although they found genetic drivers in the metastases that originated in the primary tumors, the researchers also found genetic variation between metastases in different organs coming from the same patient.

“This variation could help explain why sometimes we can see responses in the lung, but progression in the liver to the very same therapy,” said UNC Lineberger’s Carey Anders, MD, medical director of the UNC Breast Center and co-senior author of the paper.

“There are likely resistance mechanisms that are site-specific,” added Anders, who is co-director of the Breast Cancer Tumor Donation Program at UNC Lineberger at UNC Lineberger and associate professor in the UNC School of Medicine Division of Hematology/Oncology. “Being able to understand what came from the original tumor and what happened only in the metastases is key to improving treatment. The unique resource of the Tumor Donation Program, coupled with UNC’s expertise in genomics, allowed our team to make these discoveries.”