Prostate cancer patients have been offered hope after scientists at Newcastle University have identified a new group of molecules that could be targeted to slow tumour growth.

A 3-year research project involved the use of an advanced screening technique called RNA-sequencing, which found that hundreds of genes were affected by testosterone, according to findings published in EBioMedicine. Of the 700 genes identified, an important set that added glycans to the surface of prostate cancer cells was found. This group of genes has never been investigated before.

Treatments targeting glycan sugar groups have been developed for other types of the illness, such as breast cancer. It is hoped these treatments could also be used for prostate cancer. Results of the research, suggest that testosterone changes glycans to make cancer cells more likely to survive, grow and spread to other parts of the body.

Scientists say there is the potential to target these glycans which could stop the growth and spread of tumours and save lives. Dr Jennifer Munkley, Research Associate at the Institute of Genetic Medicine, Newcastle University, co-led the three-year research project with Professor David Elliott.

“Our findings are very significant for future treatments as they identify a new group of molecules in prostate cancer which could be targeted therapeutically.

“Now we have identified these glycans we will be able to develop strategies to inhibit them and help patients with this condition.

“Treatments targeting glycan sugar groups have been developed for other types of the illness, such as breast cancer. Our results mean these treatments could also be used for prostate cancer.”

Glycans have the potential to be used as part of a diagnostic test to help doctors decide which prostate cancers need treatment. 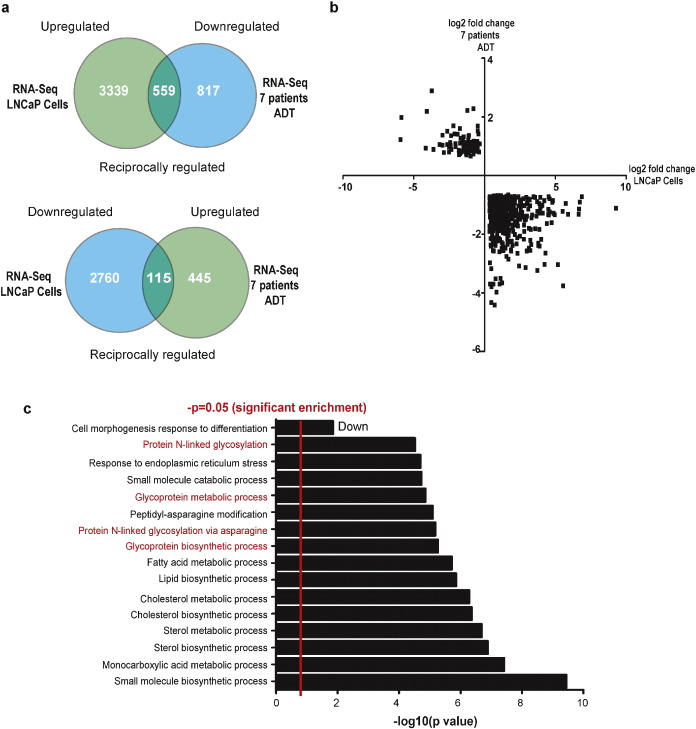 (A) RNA-Seq expression analysis of LNCaP cells treated with or without 10 nM R1881 (a synthetic androgen) for 24 h in triplicate, and of 7 PCa patient prostate biopsies before and after androgen ablation therapy (ADT). (B) Scatter plot of reciprocally regulated genes between the two datasets. (C) Gene Ontology (GO) analysis of the reciprocally regulated genes identified 72 terms with significant gene enrichment.

Most common cancer for males in UK

One in eight will be diagnosed with the condition. It is the most common cancer in UK males, and there is a need to identify how the disease progresses and for treatment options to be established. Researchers at Newcastle University used a technique, called RNA-sequencing, to identify the new set of genes that are important. The genes identified may provide novel ways the disease can be monitored in patients to predict the most aggressive prostate cancers that need to be treated.