Acute myeloid leukemia (AML) affects hematopoietic progenitor and/or stem cells by altering key signaling pathways involved in differentiation, resulting in the clonal expansion of highly proliferative immature hematopoietic cells. When AML patient samples are analyzed at the molecular level it is clear that many genetic alterations can result in this disease phenotype, including chromosome translocation, single-nucleotide polymorphisms, and epigenetic alterations. Unsurprisingly, the molecular complexity of this disease results in dramatic variability in response to chemotherapy regimens. Consistently, there are indications that age-dependent genetic alterations also exist, as patient outcomes between pediatric and adult AML do not correlate. To better understand the genetic complexity of this cancer, there has been a large effort to understand the transcription profile of AML samples. Numerous studies, including The Cancer Genome Atlas, have used RNA-seq technology to characterize not just transcript numbers, but also genetic rearrangements and splicing alterations. However, to date these studies have all approached adult AML, while the transcription landscape of pediatric cases remains largely unexplored. 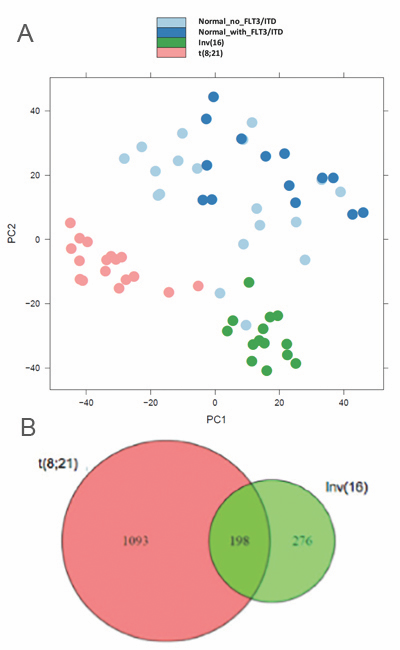 The most common form of pediatric leukemia, core binding factor AML (CBF-AML), represents 25% of cases. At the molecular level CBF-AML arises from two distinct chromosomal translocations, t(8;21) and Inv(16), which disrupt the functions of core binding factor alpha and core binding factor beta, respectively. Core binding factor proteins are essential for development and function in a complex to regulate transcription of genes involved with hematopoiesis. These translocations result in the novel fusion proteins RUNX1-RUNX1T1 and CBFB-MYH11. While the presence of these chimeric proteins is currently used for risk stratification, to date there is no targeted therapy that exploits these unique genetic events. Moreover, it is known that both translocations lead to similar clinical outcomes despite affecting different core binding factors, yet the molecular similarities and differences between these pathways remain largely uncharacterized. The Meshinchi laboratory in the Clinical Research Division has begun to fill these gaps by performing comprehensive RNA-seq analysis on pediatric AML samples in a recent article published in PlosOne.

RNA-seq analysis was performed on samples from 64 pediatric AML patients, these patients represented three distinct karyotypes: t(8;21), Inv(16), and Normal Karyotype (NK). The NK group was also subdivided by those lacking or containing a tandem duplication within the FLT3 gene (FLT3/ITD). FLT3/ITD is a commonly observed mutation in AML, however, this study revealed that the transcription profile of NK samples was largely unaffected by the presence of this mutation. Principal component analysis (PCA) was performed on the RNA-seq data for all coding genes in each sample. Using a two-component analysis, researchers were able to distinguish each unique cytogenetic subtype of AML. Despite their clinical similarities, t(8;21) and Inv(16) do in fact alter gene transcription in different fashions. While there are differences between the CBF-AML subtypes, there are also similarities. By comparing each group only to NK-AML nearly 200 genes were commonly altered by both translocations. Excitingly, this included the down regulation of nearly two-dozen HOX genes, which normally function in morphogenesis, particularly in skeletal development. Inhibiting these genes likely contributes to the lack of cellular differentiation observed specifically in CBF-AML, as they are not down regulated in NK-AML samples. Further analysis of unique expression changes within t(8;21) samples revealed decreased transcription of a network of genes involved in immune response, which only further emphasizes the unique nature of each cytogenetic subtype.

Finally, using RNA-seq technology researchers were also able to identify previously uncharacterized splicing changes and fusions transcripts within all AML samples. Splicing alterations were particularly interesting, as both NK and t(8;21) samples commonly included alternative exons, while Inv(16) samples largely skipped and excluded exons. Despite these different changes to splicing, the set of genes that experienced alternative splicing was heavily enriched for acetylated proteins, and those involved in ribosome biogenesis. The fusion transcripts identified by this study were also intriguing, RNA-seq successfully identified 94% of CBF-AML fusions, as well as fusions unknown to exist in the samples. Particularly interesting was the fusion of NUP98, a nuclear pore complex protein, to three different proteins: NUP98-NSD1, NUP98-HOXD13, NUP98-HMGB3. The NUP98-NSD1 fusion has previously been correlated to patient outcomes, while the other fusions are less known and mostly uncharacterized. Overall, this work has opened the field to many new and exciting questions. Understanding the functional consequences of these altered transcriptional profiles will hopefully lead to new therapies that exploit the unique behaviors of pediatric CBF-AML subtypes.