Angiosarcoma is a malignant cancer of the endothelial cells of blood or lymphatic vessels. Cutaneous angiosarcoma, a form of skin cancer, commonly occurs on the scalp of elderly people and can rapidly metastasize to the liver, lungs or lymph nodes. Its five-year survival rate is famously poor at 20-30%, meaning that new diagnostic and therapeutic approaches are highly sought after.

Fusion genes, hybrid genes formed as a result of gene rearrangement or mutation, have been reported in several types of malignant tumors, including leukemia, papillary glioneuronal tumors and a subset of non-small cell lung carcinomata. The latter of which is caused by the fusion gene EML4-ALK and shows dramatic response to ALK inhibitors. Interested in the role that fusion genes play in tumor formation, researchers at Kumamoto University and Kitasato University in Japan assessed the impact of these genes in skin cancer cells.

The investigators were able to identify the novel fusion gene NUP160-SLC43A3 through transcriptome sequencing, a method of determining the set of all genes transcribed under specific conditions. This fusion gene was found in 9 out of a sample of 25 skin cancer patients, and those with the gene experienced a significantly shorter duration between the onset of symptoms and their first hospital visit, suggesting rapid tumor progression. “This effect was determined to be caused partially by the shortening of the NUP160 gene,” Dr. Naoki Shimozono, researcher from the Department of Dermatology in Kumamoto University stated. 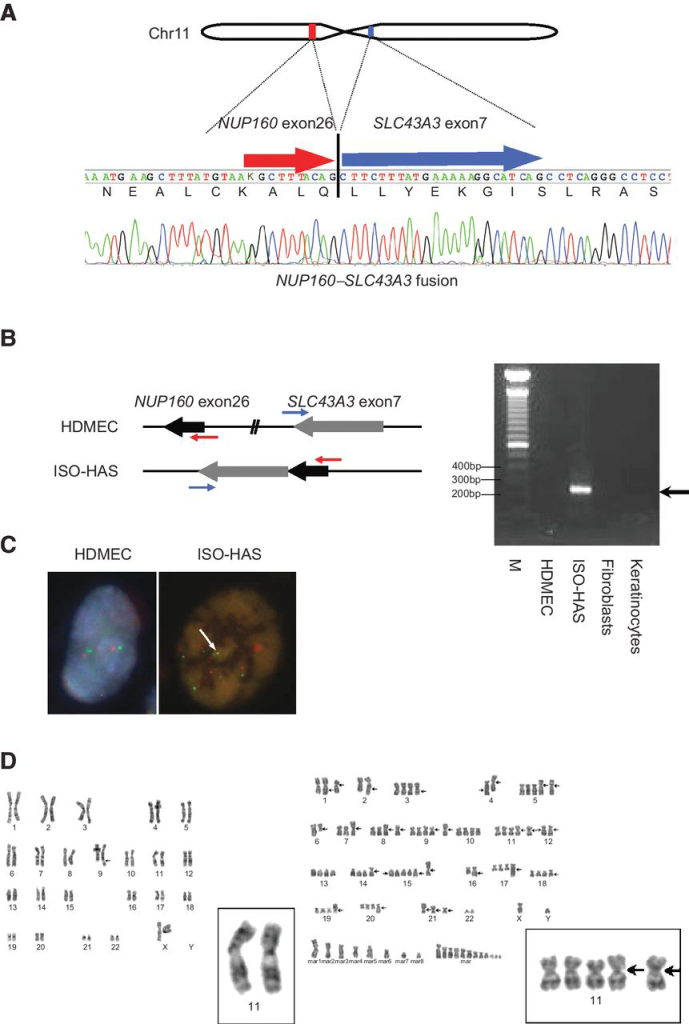 To verify the effects of the new fusion gene, cells expressing the gene were subcutaneously implanted into immunodeficient mice. After 5 weeks, the implants were removed and found to have induced tumor formation similar to that of human angiosarcoma. Further tests showed that reduction of the gene in angiosarcoma cells corresponded to decreased cell number.

“The identification of this novel fusion gene has potential implications for new diagnostic and therapeutic approaches for this area of cancer research,” said Dr. Masatoshi Jinnin, joint lead researcher from the Department of Dermatology in Kumamoto University. “Furthermore, earlier hospital visits by these patients often means that the disease has not yet metastasized. Their prognosis can be improved by implementing appropriate treatments immediately after diagnosis.”