A study that revealed new findings about prostate cells may point to future strategies for treating aggressive and therapy-resistant forms of prostate cancer.

The study proved that the prostate basal cell layer contains adult stem cells which possess a unique gene expression profile resembling the deadliest form of prostate cancer. The research was led by The University of Texas MD Anderson Cancer Center with findings published in the Feb. 29, 2016 online issue of Nature Communications.

“It has become very controversial as to whether the human prostate contains adult stem cells or not and where they are located within the basal or luminal cell compartments,” said Dean Tang, M.D., Ph.D., professor of Epigenetics and Molecular Carcinogenesis. “Our study provided definitive evidence that the prostate basal cell layer harbors self-renewing adult stem cells that are enriched in stem-cell genes.”

Tang and his team headed by Dingxiao Zhang, Ph.D., an instructor in Tang’s lab, show that the findings point to a “theoretical rationale for combining Pol-I and MYC inhibitors to treat highly aggressive forms of prostate cancer which are resistant to endocrine therapy.” Pol-I is an enzyme involved with DNA replication and MYC is a regulator gene that plays a role in cell death and transformation.

The prostate gland contains basal and luminal cells, both of which have been identified as “cells-of-origin” for prostate cancer in recent mouse studies. However, the question of whether and where stem cells were present in the human prostate has been largely a medical mystery and a constant debate until now.

This finding is important because a subset of prostate cancers (less than 5 percent) are highly aggressive and do not respond to current anti-prostate cancer treatments such as endocrine therapy. 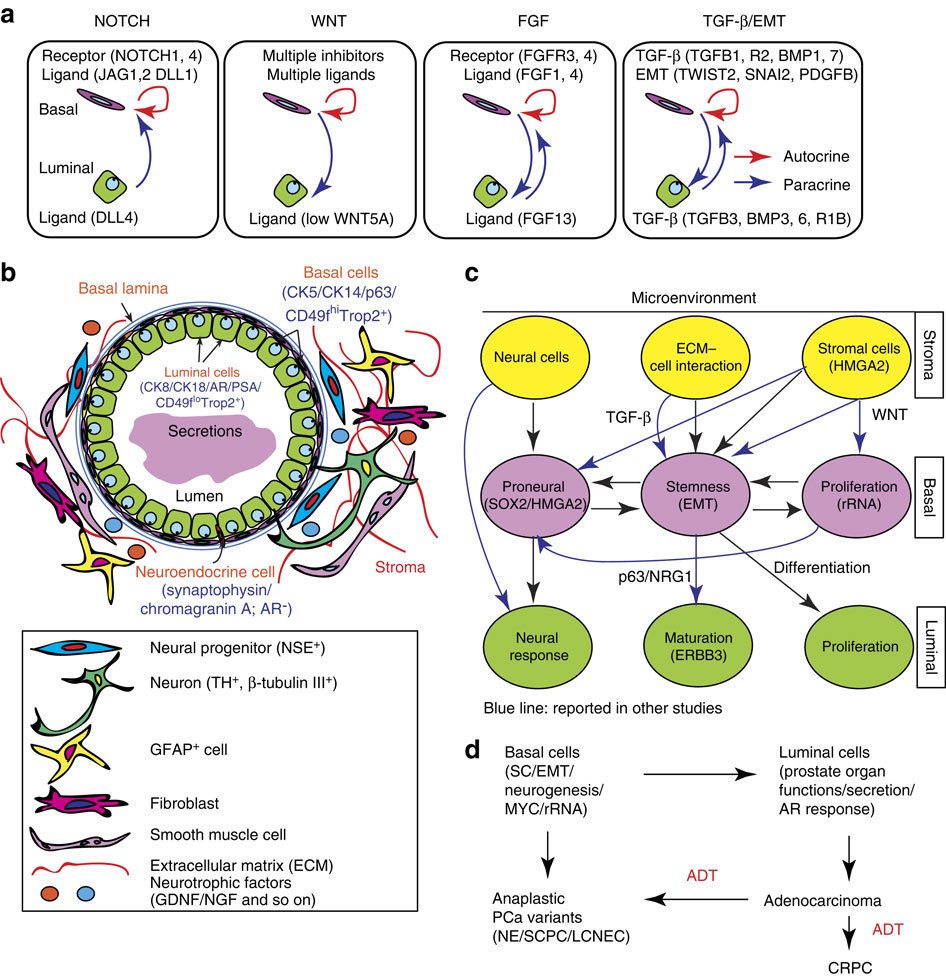 (a) Schematic illustration of crosstalk in representative signalling pathways between prostatic basal and luminal cells. Preferentially expressed genes in each lineage are indicated. (b) A schematic illustrating potential crosstalk between epithelial cells and ECM and stromal cells. (c) Schematic illustration of reciprocal signalling crosstalk between basal, luminal cells and stromal compartments. Black arrows indicate data obtained in this study and blue arrows the interactions reported in the literature. (d) Basal cells could potentially function directly as the cells-of-origin for anaplastic variant PCa and/or indirectly as the cells-of-origin for adenocarcinomas via differentiation into luminal cells.

Tang’s team also found that basal stem cells are enriched in a genetic component that is partially regulated by MYC which offers hope that the deadliest of prostate cancers and therapy-resistant prostate cancers may have a new therapeutic option.

“Our studies establish that therapy that combines Pol-I and MYC inhibitors may be a potential new line of treatment for highly metastatic and endocrine therapy-resistant prostate cancer,” said Tang.