Even though its causes have been unclear, premenstrual dysphoric disorder (PMDD) has been described as a severe form of premenstrual syndrome (PMS). Affecting 2–5% of women of reproductive age, PMDD is like PMS in that it follows a predictable, cyclic pattern. Yet PMDD, which is marked by disabling irritability, sadness, and anxiety, is associated with unusual sensitivity to fluctuations in sex hormones. This sensitivity has motivated researchers to focus on PMDD’s potential biological drivers, rather than on psychological or cultural phenomena.

New results from scientists based at the National Institutes of Health (NIH) suggest that PMDD arises from certain molecular mechanisms. These scientists report that they have found that a large gene complex shows a conspicuous difference in its response to ovarian steroids.

“In this study, lymphoblastoid cell line cultures (LCLs) from women with PMDD and asymptomatic controls were compared via whole-transcriptome sequencing (RNA-seq) during untreated (ovarian steroid-free) conditions and following hormone treatment,” wrote the article’s authors. “The women with PMDD manifested ovarian steroid-triggered behavioral sensitivity during a hormone suppression and addback clinical trial, and controls did not, leading us to hypothesize that women with PMDD might differ in their cellular response to ovarian steroids.” 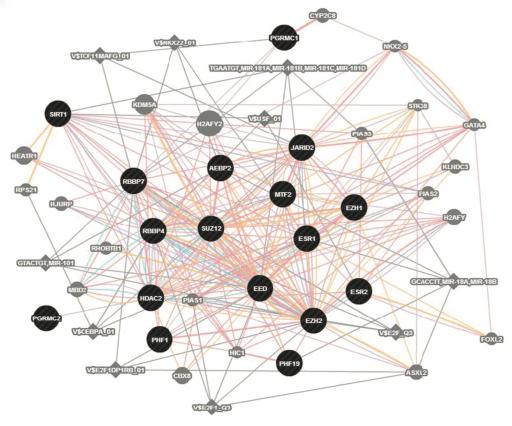 The expression of the Extra Sex Combs/Enhancer of Zeste, or ESC/E(Z), gene network was found to be systematically disturbed in PMDD. [Peter Schmidt, M.D./NIMH; David Goldman, M.D./NIAAA]