MicroRNAs (miRNAs) released into the peripheral circulation upon cellular injury have shown a promise as a new class of tissue-specific biomarkers. Researchers from Maastricht University were first to demonstrate that next-generation sequencing analysis of serum from human subjects with acetaminophen-induced liver injury revealed a specific signature of circulating miRNAs. They consequently hypothesized that different types of hepatic liver impairments might feature distinct signatures of circulating miRNAs and that this approach might be useful as minimally invasive diagnostic “liquid biopsies” enabling the interrogation of underlying molecular mechanisms of injury in distant tissues. Therefore they examined serum circulating miRNAs in a total of 72 serum samples from a group of 53 subjects that included patients with accidental acetaminophen overdose, hepatitis B infection, liver cirrhosis and type 2 diabetes as well as gender- and age-matched healthy subjects with no evidence of liver disease. The miRNA signatures were identified using next-generation sequencing that provided analysis for the whole miRNome, including miRNA isoforms. Compared to the healthy subjects, a total of 179 miRNAs showed altered serum levels across the diseased subjects. Although many subjects have elevated alanine aminotransferase suggesting liver impairments, the researchers identified distinct miRNA signatures for different impairments with minimum overlap. Furthermore, the bioinformatics analysis of miRNA signatures revealed relevant molecular pathways associated with the mechanisms of toxicity and or pathogenesis of disease. Interestingly, the high proportion of miRNA isoforms present in the respective signatures indicated a new level of complexity in cellular response to stress or disease. This study demonstrates for the first time that signatures of circulating miRNAs show specificity for liver injury phenotypes and, once validated, might become useful for diagnosis of organ pathologies as “liquid biopsies”. 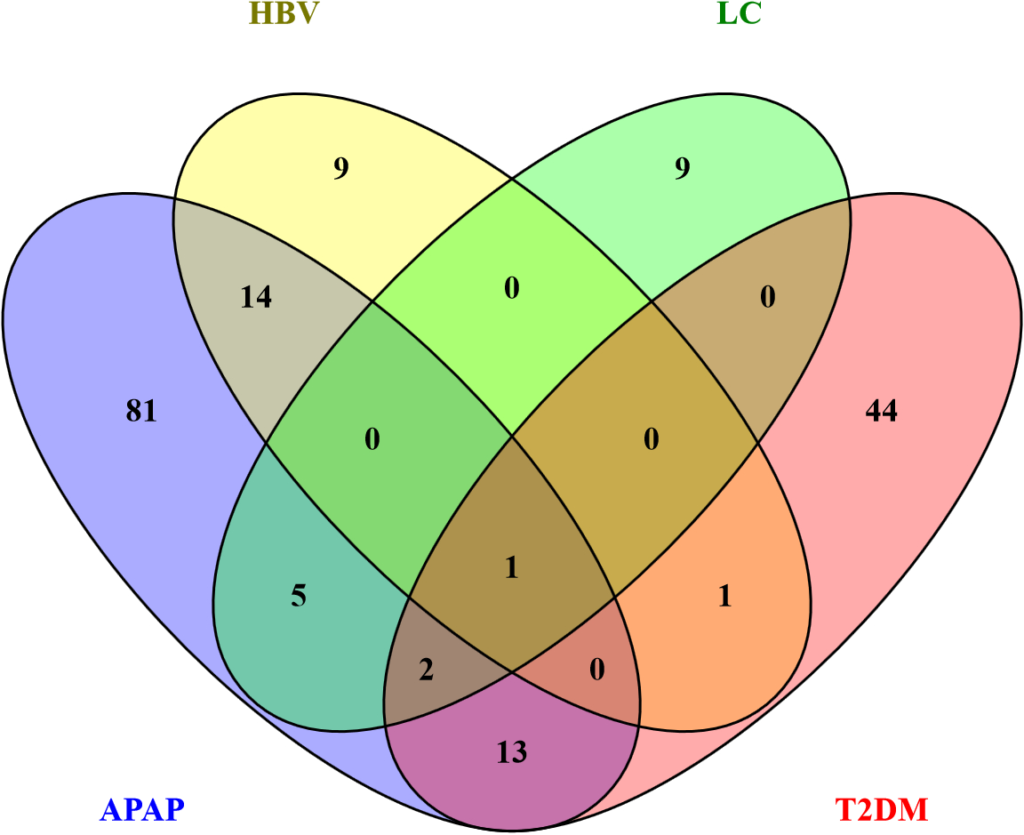 The Venn diagram shows minimal overlap between the liver impairments and T2DM. In total 179 miRNAs were identified (116 in APAP, 25 in HBV, 17 in LC and 61 in T2DM) of which only 1 miRNA was significantly altered among all conditions.