Small non-coding RNAs represent RNA species that are not translated to proteins, but which have diverse and broad functional activities in physiological and pathophysiological states. The knowledge of these small RNAs is rapidly expanding in part through the use of massive parallel (deep) sequencing efforts.

Researchers from the Johns Hopkins University School of Medicine present here the first deep sequencing of small RNomes in subcellular compartments with particular emphasis on small RNAs (sRNA) associated with the nucleolus. The vast majority of the cellular, cytoplasmic and nuclear sRNAs were identified as miRNAs. In contrast, the nucleolar sRNAs had a unique size distribution consisting of 19–20 and 25 nt RNAs, which were predominantly composed of small snoRNA-derived box C/D RNAs (termed as sdRNA). Sequences from 47 sdRNAs were identified, which mapped to both 5′ and 3′ ends of the snoRNAs, and retained conserved box C or D motifs. SdRNA reads mapping to SNORD44 comprised 74% of all nucleolar sdRNAs, and were confirmed by Northern blotting as comprising both 20 and 25 nt RNAs. A novel 120 nt SNORD44 form was also identified. The expression of the SNORD44 sdRNA and 120 nt form was independent of Dicer/Drosha–mediated processing pathways but was dependent on the box C/D snoRNP proteins/sno-ribonucleoproteins fibrillarin and NOP58. The 120 nt SNORD44-derived RNA bound to fibrillarin suggesting that C/D sno-ribonucleoproteins are involved in regulating the stability or processing of SNORD44. This study reveals sRNA cell-compartment specific expression and the distinctive unique composition of the nucleolar sRNAs. 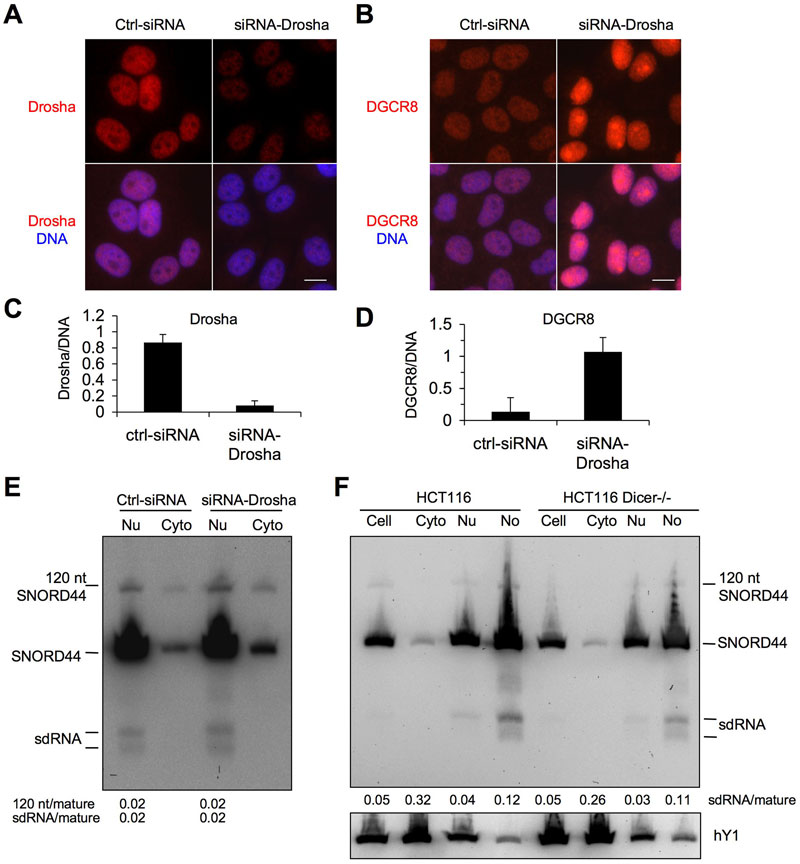