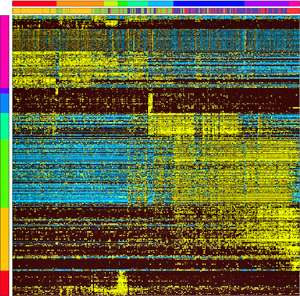 With a jumble of colors resembling abstract art, this array shows the expression of genes (horizontal rows) that are associated with different types of bone marrow progenitor cells (vertical columns).

Developing blood cells are caught in tugs of war between competing gene regulatory networks before finally deciding what type of cell to become, according to a study published Aug. 31 in Nature.

Researchers at Cincinnati Children’s Hospital Medical Center report that as developing blood cells are triggered by a multitude of genetic signals firing on and off, they are pulled back and forth in fluctuating multi-lineage states before finally becoming specific cell types. Although the scientists still don’t understand exactly what ques the cells to an eventual fate, their work suggests that competing gene networks induce dynamic instability, resulting in mixed-lineage states that are necessary to prime newly forming cells for that decision.

“How do blood cells know to become neutrophils or monocytes?” Grimes asked. “Two thirds of your bone marrow is taken up with this activity and the number of cells has to be exquisitely balanced. Too many or too few of either can kill you.”

In the current study the research team looked specifically at the formation of neutrophil and monocyte (macrophage) blood cells – critical components of the immune system. The researchers studied mouse cells as they developed in a natural state using a new and rapidly expanding technology called single-cell RNA sequencing – which identifies the genetic expression programs of individual cells and their presumptive regulators.

ICGS takes the additional step of giving researchers an intuitive platform that can process and analyze all of the sequencing and biological data to identify the various transitioning or shifting genomic and cellular states of cells – in this instance developing blood cells.