RNA-Seq reveals conservation of function in the yolk sac

The yolk sac is phylogenetically the oldest of the extraembryonic membranes. The human embryo retains a yolk sac, which goes through primary and secondary phases of development, but its importance is controversial. Although it is known to synthesize proteins, its transport functions are widely considered vestigial. Here, researchers from the University of Cambridge report RNA-sequencing (RNA-seq) data for the human and murine yolk sacs and compare those data with data for the chicken. They also relate the human RNA-seq data to proteomic data for the coelomic fluid bathing the yolk sac. Conservation of transcriptomes across the species indicates that the human secondary yolk sac likely performs key functions early in development, particularly uptake and processing of macro- and micronutrients, many of which are found in coelomic fluid. More generally, these findings shed light on evolutionary mechanisms that give rise to complex structures such as the placenta. The researchers identify genetic modules that are conserved across mammals and birds, suggesting these modules are part of the core amniote genetic repertoire and are the building blocks for both oviparous and viviparous reproductive modes. They propose that although a choriovitelline placenta is never established physically in the human, the placental villi, the exocoelomic cavity, and the secondary yolk sac function together as a physiological equivalent. 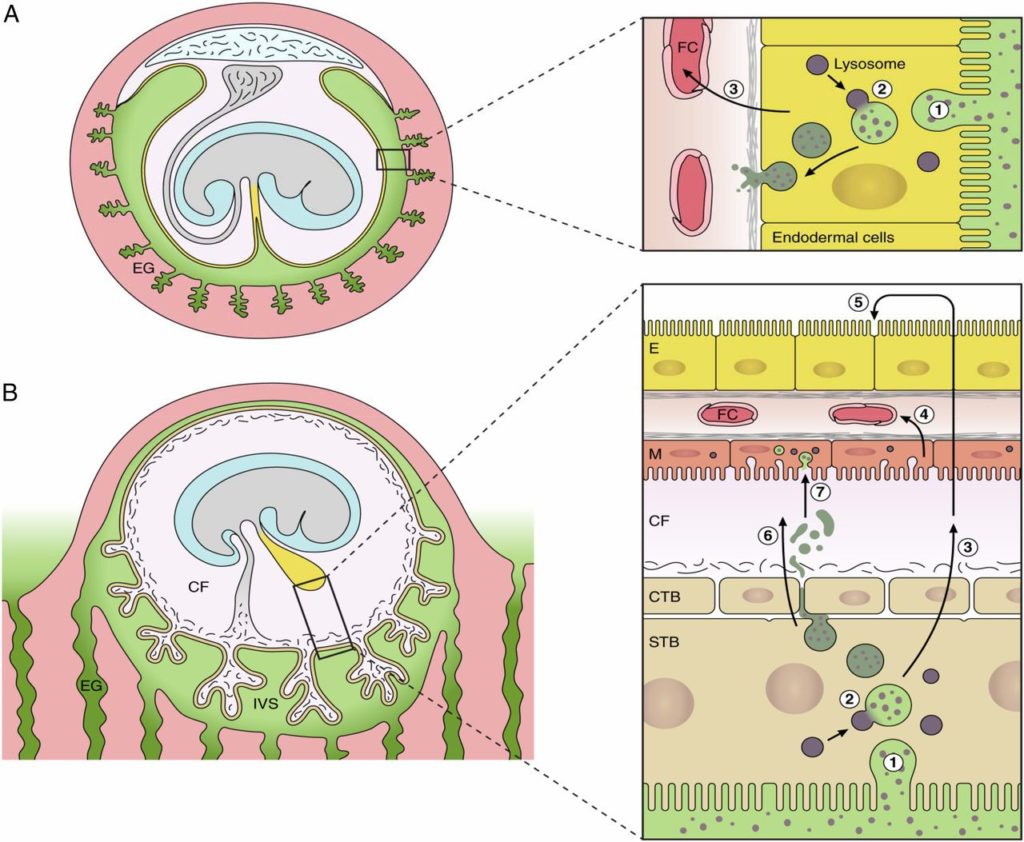 (A) and the speculated pathway in the human (B). In the mouse, histotrophic secretions (green) released from the endometrial glands are phagocytosed (step 1) by the endodermal cells of the visceral layer of the inverted yolk sac. Following fusion with lysosomes (step 2), digestion of maternal proteins leads to release of amino acids that are transported (step 3) to the fetal circulation (FC). In the human, histotrophic secretions are released from the endometrial glands through the developing basal plate of the placenta into the intervillous space (IVS) and are phagocytosed (step 1) by the syncytiotrophoblast (STB) (42). We speculate that following digestion by lysosomal enzymes (step 2), free amino acids are transported (step 3) by efflux transporters to the coelomic fluid (CF), where they accumulate. Nutrients in the CF may be taken up by the mesothelial cells (M) of the yolk sac and transported (step 4) into the fetal circulation (FC). Alternatively, they may diffuse into the cavity of the yolk sac and be taken up by the endodermal cells (step 5). Some intact maternal proteins may also be released into the CF by exocytosis of residual bodies (step 6) and may be engulfed by the mesothelial cells (step 7). CTB, cytotrophoblast cells.