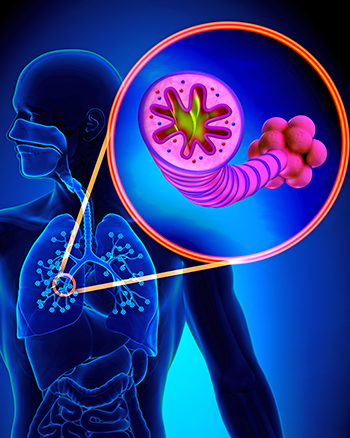 from Yale News by Ziba Kashef –

The two lung conditions — chronic obstructive pulmonary disease (COPD) and idiopathic pulmonary fibrosis (IPF) — share risk factors such as smoking, but differ in their effect on the lung. COPD is characterized by insufficient repair resulting in destruction of the lung tissue, while IPF is characterized by too much repair leading to excessive scarring of the lung. Both diseases cause significant morbidity and mortality rates.

The Yale team and co-authors acquired tissue samples from patients with COPD or IPF, as well as other conditions, via the Lung Tissue Resource Consortium, a large biorepository of the National Heart, Lung and Blood Institute. They used RNA sequencing and systems biology techniques to analyze changes in the expression of genes in both diseases, compared to non-diseased lungs. They discovered that some gene changes were common to both diseases.

“We were able to identify a relatively large number of genes that behaved similarly in both diseases,” said author Dr. Naftali Kaminski, chief of the Pulmonary, Critical Care, and Sleep Medicine section at Yale. “This finding may suggest that there are potential core mechanisms shared by IPF and emphysema, allowing for the development of interventions to target both diseases.”

The shared network of genes that they uncovered is known as the p53/hypoxia pathway. “This may suggest that the network underlies the response to the environmental causes of IPF and COPD,” said Dr. Avrum Spira, co-corresponding author and a key collaborator on the project. “It may also be relevant to lung cancer, a condition that is more common in patients with IPF or COPD.”

The research was a collaborative effort of scientists at Yale, Boston University, University of Colorado-Denver, Harvard, University of Pittsburgh, University of Michigan, and the Mayo Clinic. It represents the first large-scale transcriptomic study that directly compares chronic lung diseases. “The study of COPD, IPF, or even lung cancer has been siloed for too long,” said Kaminski. “We may learn a lot by comparing and contrasting these devastating conditions.”

The study, which was published online in the American Journal of Respiratory and Critical Care Medicine, was part of the Lung Genomics Research Consortium funded by a National Heart, Lung, and Blood Institute grant under the American Recovery and Reinvestment Act.