Cell division is not perfect. As we get older, mutations often appear in genes in normal cells. Most of these mutated cells and their progeny — called “somatic clones” — have no effect on our health, but a tiny fraction can help trigger cancer growth or contribute to other conditions such as cardiovascular disease. A team led by scientists from the Broad Institute’s Cancer Program and Massachusetts General Hospital (MGH) has now created a powerful new approach that detects mutations across many different types of normal cells by analyzing RNA sequencing data from normal tissues.

“This is the first study to analyze this landscape of gene mutations in normal cells across many human tissues,” said Keren Yizhak, postdoctoral fellow and lead author on a Science paper presenting the work.

Other research groups previously examined such mutations in individual tissue types using DNA sequencing. Yizhak and her colleagues instead began with RNA sequencing data from the Genotype-Tissue Expression (GTEx) program, a long-term initiative sponsored by the National Institutes of Health that has collected a massive amount of data from many types of normal tissues donated by people who died of causes other than cancer.

“It’s not easy to identify mutations from RNA, because there’s a lot of ‘noise’ in RNA data, and all our tools have been developed and tuned for calling mutations in DNA,” said Gad Getz, director of the Cancer Genome Computational Analysis Group at the Broad, professor of pathology and director of bioinformatics for MGHl’s Cancer Centerand Department of Pathology, and senior author on the paper. “Keren developed a pipeline based on our DNA analysis tools but which analyzes RNA sequences, called RNA-Mutect, and added steps that reduce the number of false positives to a very low level.”

By analyzing RNA sequences from 29 types of healthy tissues from 488 people in the GTEx database, “we found that 95 percent of the individuals had at least one tissue with mutations in it,” Getz said. “That means that everyone is going around with these mutated cells.”

The team recognized several patterns in the mutations they identified that were consistent with earlier studies. For instance, the investigators found that lung, esophagus, and sunlight-exposed skin — all tissues with increased environmental exposure — had more mutations than other tissues (aka, a higher “mutational burden”). Higher rates of mutation appeared not only among cells from older people but also among cell types that proliferate quickly.

Additionally, the RNA data showed that normal tissues harbored cells containing mutations in known cancer genes. “We expect that most of these clones would not ever become cancer; they grow but likely stop at some point,” Getz said.

Among the questions raised by the work: Could such mutations affect efforts to detect cancer early? For example a promising detection method called “blood biopsies”searches the blood for scraps of DNA shed from tumor cells. If it turns out that normal cells also release DNA with cancer-related mutations into the blood, that could complicate such detection efforts, the scientists noted. 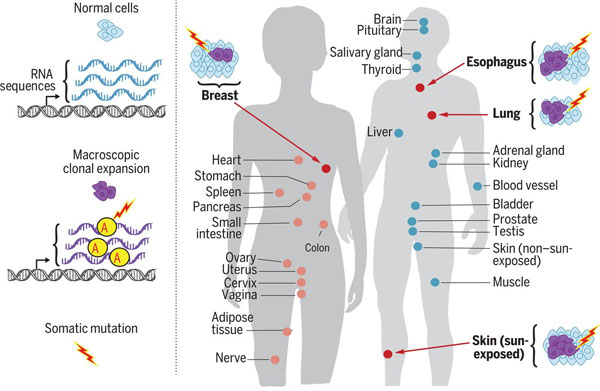 RNA sequences from 29 normal human tissues collected as part of the Genotype–Tissue Expression (GTEx) project are analyzed using RNA-MuTect, a method developed for detecting somatic mutations in RNA-seq data. Macroscopic clonal expansions, characterized by shared somatic mutations, are detected in all tissues; skin, esophagus, and lung have the largest number of somatic mutations.

The team’s research to date has been on “macroscopic” clones, ones large enough to generate readable amounts of RNA. More generally within this field of research, “looking at mutations in smaller clones, down to single cells, will be very interesting,” Getz said. Another major challenge is to identify early events in the progression of various diseases. To that end, the National Cancer Institute has recently launched a new large-scale study of pre-cancerous lesions called the the PreCancer Atlas.

“Somatic clone expression has been shown in other diseases that increase with age,” Getz continued. “For example, there is an association between these clones in the blood and heart disease. We need to study all types of disease that increase with aging, and test what components derive from somatic clones or from other biological or environmental factors. This is an exciting direction of research — just the beginning of understanding how the body ages.”