RNA-Seq Reveals the Origin of Wings

First, a set of dorsally derived outgrowths evolved along a number of body segments including the first thoracic segment (T1).

Homeotic genes were subsequently co-opted to suppress growth of some dorsal flaps in the thorax and abdomen. In T1 this suppression was accomplished by Sex combs reduced, that when experimentally removed, results in an ectopic T1 flap similar to prothoracic winglets present in fossil hemipteroids and other early insects. Global gene-expression differences in ectopic T1 vs. T2/T3 wings suggest that the transition from flaps to wings required ventrally originating cells, homologous with those in ancestral arthropod gill flaps/epipods, to migrate dorsally and fuse with the dorsal flap tissue thereby bringing new functional gene networks; these presumably enabled the T2/T3 wing’s increased size and functionality.

Third, “fused” wings became both the wing blade and surrounding regions of the dorsal thorax cuticle, providing tissue for subsequent modifications including wing folding and the fit of folded wings.

Finally, Ultrabithorax was co-opted to uncouple the morphology of T2 and T3 wings and to act as a general modifier of hindwings, which in turn governed the subsequent diversification of lineage-specific wing forms. 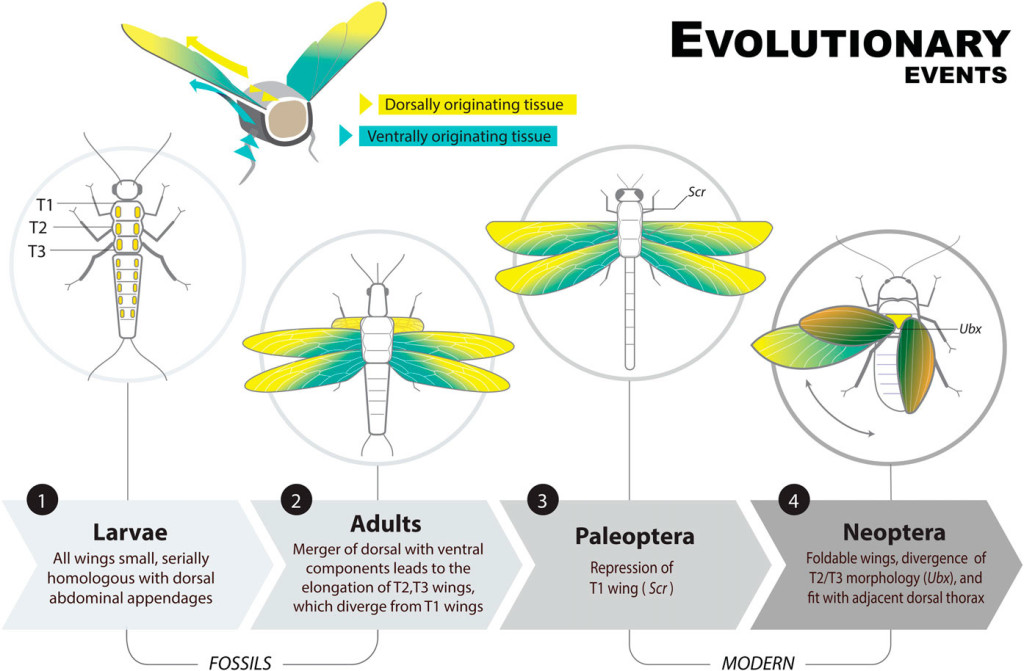 Major events in the divergence and segmental diversification of insect wings. Note the presence of a T1 winglet in fossil insects, which persisted until after T2 and T3 wings elongated. Additionally, the divergence of T2/T3 wing morphology occurs also in some Paleoptera (Ephemeroptera), which if mediated by Ubx would place this feature at a more basal location than depicted here. Illustration by Daorong Fang.