Unequal growth between genetically identical monozygotic (MZ) twins in the womb may be triggered in the earliest stages of human embryo development, according to a new study led by King’s College London.

Around 80% of MZ twins originate from monochorionic/diamniotic pregnancies, where they share the same placenta in the womb. MZ twins are recognized to be at greater risk of congenital anomalies. One of the most common complications is severe discordant growth, in which there is a 25% or greater difference in fetal or birth weight between the twins in the absence of twin-to-twin transfusion syndrome.

Such severe discordant growth has been reported in 7% to 14% of all monochorionic/diamniotic pregnancies. Unequal placental sharing can explain about half of these pregnancies; the cause of the other half is largely unknown.

The case presented in the latest paper, published in the journal Stem Cell Reports, suggests that uneven growth of identical twins could start during the early stages of preimplantation development. An embryo donated for research revealed two inner cell masses (ICMs, internal cluster of cells at the embryonic pole of the blastocyst which develops into the body of the embryo), which is a sign of monochorionic/diamniotic pregnancy that will give rise to MZ twins. In this case, the two ICMs were not equal and high-resolution RNA sequencing indicated that they were at different stages of development; the smaller one was in the earliest stages of cell lineage commitment, while the bigger one had already differentiated to some extent. The differences in development would become negligible; however, the difference in size would be likely to continue throughout the pregnancy. 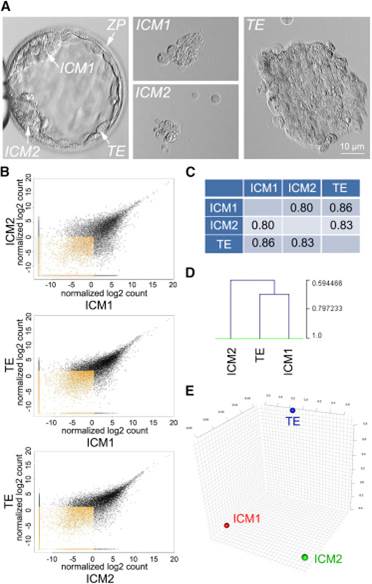 Laila Noli, first author and PhD student from King’s College London said: ‘Having two distinct ICMs within a single embryo of which one was bigger and more developmentally advanced than the other was an unexpected finding. Prevailing opinion would expect them to be absolutely identical at that stage, and that the cause of uneven growth of MZ twins would be due to their position in the womb or other unknown environmental circumstances at later stages of pregnancy.’

Dr Dusko Ilic, lead author from the Division of Women’s Health, King’s College London, says: ‘Until now, the earliest report of uneven growth of MZ twins was at 12 weeks of pregnancy. We found that it can start virtually in the first few days after conception. The prevalence of such early stage uneven growth is not known and further case reports and studies are needed. We do not know whether the two ICMs within the same embryo may have originated from uneven splitting of a single “parental” ICM or whether the two ICMs formed independently. Either way, our case report suggests that cellular and molecular events may play a role in uneven growth of MZ twins from monochorionic/diamniotic pregnancies.’