RNA-seq reveals why every COVID-19 case is different

As scientists around the world develop life-saving COVID-19 vaccines and therapies, many are still wondering exactly why the disease proves deadly in some people and mild in others.

To solve this puzzle, scientists need an in-depth understanding of how the body’s many types of immune cells respond to SARS-CoV-2, the virus that causes COVID-19.

A new international study led by scientists at La Jolla Institute for Immunology (LJI), The University of Liverpool and the University of Southampton is the first to give a detailed snapshot of how the body’s CD4+ T cells respond to the SARS-CoV-2 virus. Among the findings, their work suggests that early in the illness, patients hospitalized with severe cases of COVID-19 develop a novel T cell subset that can potentially kill B cells and reduce antibody production. 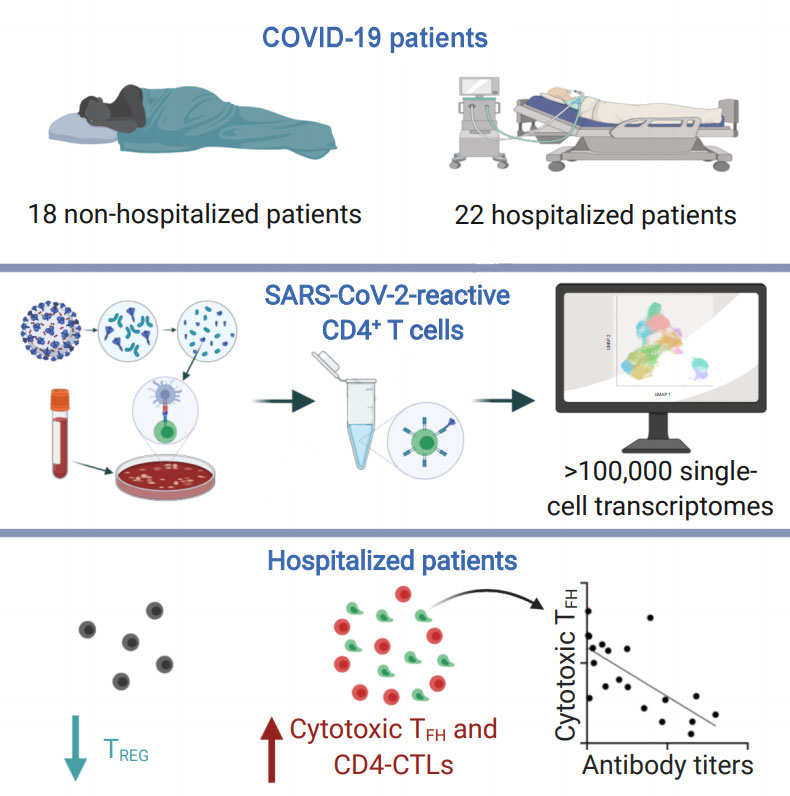 Zooming in on individual cells

“This study employs single-cell RNA-seq to analyze RNA molecules expressed by CD4+ T cells that specifically recognize SARS-CoV-2″ says LJI Associate Professor Pandurangan Vijayanand, M.D., Ph.D., who led the study with long-time collaborator Christian H Ottensmeier, M.D., Ph.D., FRCP, professor at the University of Liverpool and adjunct professor at LJI. “This lets us show, for the first time, the complete nature of the cells that respond to this virus.”

“This is the beginning,” says Ottensmeier, a physician scientist who co-led the study. “We needed to have a reference to look back at for further studies, and this work is novel, timely, detailed, innovative–and open.”

Vijayanand and his colleagues at LJI have pioneered the use of single-cell RNA-seq in immunology. RNA-seq gives researchers a new window into the gene expression patterns that can make each person’s immune response to a virus different. For the new study, the researchers focused on CD4+ T cells, which play many critical roles in fighting infection.

“CD4+ T cells play a central role in orchestrating the immune response,” says study co-first author Benjamin Meckiff, Ph.D., postdoctoral fellow at LJI. “They are a heterogeneous population of immune cells carrying out a wide range of functions, and we have been able to specifically analyze their response to SARS-CoV-2.”

Vijayanand and Ottensmeier had planned to use single-cell RNA-seq to analyze CD4+ T cells from patients hospitalized for influenza this year. When the pandemic hit, the researchers applied in early March for approval to use samples from COVID-19 patients as well.

“We were collecting appropriate samples very early on in the pandemic,” says Vijayanand.

The scientists used single-cell RNA-seq to analyze the types of CD4+ T cells that respond to SARS-COV-2 in these patients. Each type of T cell has a role in fighting viruses: some (the “helper” CD4+ T cells) alert the body to infection and recruit other immune cells, while others (TFH cells) signal B cells to make antibodies. Finally, some (Tregs) do the important job of inhibiting other T cells, keeping the immune system from damaging the body’s own tissues.

“There are multiple flavors of T cells that respond to this virus,” says Vijayanand.

The researchers caution that human studies are only correlative and cannot conclude that certain T cell populations are driving disease severity. They do believe some findings warrant a closer look.

For example, the scientists found that hospitalized patients have higher levels of “cytotoxic” TFH cells, which could potentially make an infection worse. Instead of doing their job and helping B cells make antibodies, the cytotoxic TFH cells seen in this study were very similar to cells that have been seen killing B cells in previous studies. The researchers then examined SARS-CoV-2-specific antibody concentrations in patients. Those with dysfunctional TFH cells also had fewer antibodies.

“The TFH cells in hospitalized patients displayed gene signatures that suggest they are dysfunctional and aren’t giving the help to B cells that we would expect,” says Meckiff.

A baseline for future investigations

Overall, the study gives the scientific community a starting place to explore CD4+ T cell responses to SARS-CoV-2, and the work establishes a baseline for comparing responses in people over time or with different disease severities. To support these efforts, the researchers made their data immediately available online, just two months after the project began.

“We had to be quick,” says study co-first author Ciro Ramírez-Suástegui, a bioinformatics specialist at LJI. “Having the data available for everyone is essential.”

In fact, the data and the research method could be important for more than infectious disease research. Ottensmeier explains that a better understanding of how the body responds to viruses can also guide future research into cancer immunotherapies, which would use the body’s own immune system to target and kill cancer cells.

“With this study, we levied our long-standing collaboration for a new human health puzzle,” says Ottensmeier. “Going forward, we can extend this understanding of what’s going on in the blood in response to new viruses to understanding what goes on in the tissue when our immune system deals with cancer.”