They sport some of the most impressive headgear in the insect world, yet they’re no bigger than a kernel of corn.

They live all over the world, including in Storrs, mostly found in woods and gardens, but a select few have one of the best views of campus from their cozy mesh tents inside the rooftop research greenhouses on the Biology/Physics Building – not typically a place where you’d want to house a bug that pierces plants to feast on their juices. But these aren’t typical bugs.

Worldwide, there are more than 3,000 species of tiny treehoppers, known for their ornate pronotum – the dorsal topside of first of the three segments of an insect’s thorax – that is commonly referred to as the treehopper’s “helmet.” Why the treehopper developed the enlarged, three-dimensional hood ornament that distinguishes it from the rest of the insect world remains a mystery to scientists, though it’s theorized that mimicry or camouflage designed to protect it from predators is a likely reason.

But a study from researchers in UConn’s Ecology and Evolutionary Biology Department, published today in the journal Nature Ecology & Evolution, is shedding new light on a long-running debate over just how treehopper’s helmet evolved.

“I’ve always been interested in things that look really cool,” said Cera Fisher Ph.D. ’19, a post-doctoral researcher and UConn Outstanding Scholar Fellowship recipient who has been studying treehoppers since 2012 and is the lead author of the new study. “And, in particular, the kinds of body shapes where you’re like, ‘Whoa! How did that evolve?’ You know, where it’s just a little bit mind blowing.”

The treehopper’s helmet is, indeed, mind blowing: Some species resemble leaves or thorns, while others look as though ants or wasps are sitting perched atop the treehopper’s head. How that unique helmet came to be has been the subject of debate amongst the entomologists and evolutionary biologists that study the small insects: Does it develop using the same genes as the rest of the body wall? Or did it have to borrow developmental genes from somewhere else – maybe the legs or wings?

“With their closest relatives – and really almost every other bug – this same body part is just a flat piece of their back,” said Fisher. “With the treehopper, that body part projects in three different dimensions, giving them this whole new space in which they can evolve. They’ve been around for maybe 130 million years, but in that time they’ve evolved 3000 different shapes of this body part. That kind of diversity is really stunning.”

Fisher sought to tackle the question of how the treehopper evolved its helmet by sequencing the insect’s RNA, the nucleic acid present in all living cells that works as a messenger, carrying information on how genes are expressed. She developed her samples by first domesticating her own colony of Entylia carinata, which Fisher calls the “camelback treehopper” – a species that can be found in Connecticut, has an interesting c-shaped curve in its helmet, develops relatively quickly from egg to adult, and isn’t quite as picky about its diet as some other species. The UConn colony dines on fast-growing and easy-to-cultivate sunflower plants.

“The leafhopper is our comparison case,” said Fisher. “It’s standing in for what we think the treehopper’s ancestor might have been more like.”

Fisher then sequenced the RNA from multiple body parts in both insects and waded through more than one billion data points in search of any similarities or signals that might point to specific genes at play in the formation of the treehopper’s helmet. Ultimately, while the leafhopper’s RNA sequence showed that its flat pronotum was substantially similar to its also flat mesonotum, which is the topside of its second body segment, the genes of the treehopper’s helmeted pronotum were most similar to its wings.

“We had three different ideas for things that might have led to the evolution of the helmet,” Fisher said. “We thought that maybe it was just using the same developmental pathways that normally are used in that dorsal body wall. We thought that it might be possible that it was reusing some wing-related genes, and then we thought it might be that it’s reusing genes that are normally involved in leg development.” 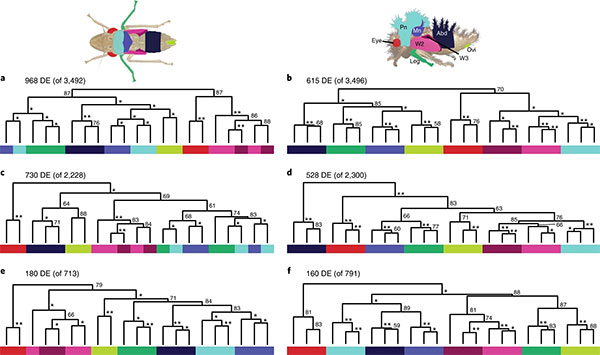 a,b, Anatomical structure development genes (GO:0048856). Leafhopper (H. vitripennis) mesonotum and pronotum samples are most similar to each other (a), while treehopper (E. carinata) helmets (b) are most similar to wings. c,d, Signalling genes (GO:0023052). Leafhopper pronotum and mesonotum samples cluster with legs (c), while treehopper helmets (d) are most similar to wings. e,f, Transcription factor activity genes (GO:0003700). Clustering patterns in both leafhoppers (e) and treehoppers (f) match the predictions of serial homology, with the exception that legs and ovipositors did not form a separate cluster in the leafhopper. Numbers beside labels indicate features differentially expressed (DE) across body regions and the total number of features in each subset. Body regions studied are false-coloured on the leafhopper (left) and treehopper (right) nymphs at top. A single asterisk indicates support >90, and two asterisks indicate support of 100.

Elizabeth Jockusch, the lab director and professor overseeing Fisher’s work and co-author of the study, said the biggest surprise for her was in just how large the effect on gene expression was.

“I would have thought that even if the helmet had incorporated a developmental network from some other body part,” she said, “that we would still predominately see that it looked like its serial homologue,” meaning the body part nearest to it, the second thoracic segment. That, however, was not the case: the genetic landscape linking the wings to the helmet was overwhelmingly clear.

Jockusch said the other surprise from the study was that, between the two species – the treehopper and the leafhopper – everything in the gene expression lines up exactly the way you think it would, except for the treehopper’s helmet.

“Especially in insects, with how their body plans change, the way you get all this diversity is by these serially repeated body parts diverging from each other,” Fisher said. “What is interesting about the treehopper is that it’s a case of divergence of these serial homologues where it’s not just acquiring a few changes gradually over the course of hundreds of millions of years. It’s taking this entire suite of genes and redeploying it in this spot and, by doing so, you get a really different body part.”

Fisher’s study only involved one species of treehopper and one species of leafhopper, and only sampled the insects at one point in their development from immature nymphs to complete, helmeted adults. Her work on the fascinating little bugs will continue, though, with additional study that involves sampling the same species at different points in their nymphal development as well as sampling two additional species of treehoppers to see if the same RNA signaling occurs in across different members of the diverse treehopper family. The continuing study will also add another comparison species, the milkweed bug.

Fisher said that there are still questions to be answered about how the treehopper helmet came to be.

“You can try to get at the early changes, like what exactly changed to kick off all of this wing-like gene expression?” she said. “Another question is that, given that we have this wing-like gene expression, how do we get all these shapes? How do we get all this diversity? Because there’s a lot of diversity in insect wings, too, and a lot of the ways that insect wings can change shape and form have been studied a lot, especially in butterflies. But we don’t know how this three-dimensional thing might get tinkered with through natural selection.”

You can learn more about treehoppers and the Jockusch lab’s work with these fascinating insects at a new exhibit curated by the Connecticut State Museum of Natural History. The exhibit officially opens in January 2020, but is available for viewing now at UConn’s Homer Babbidge Library.