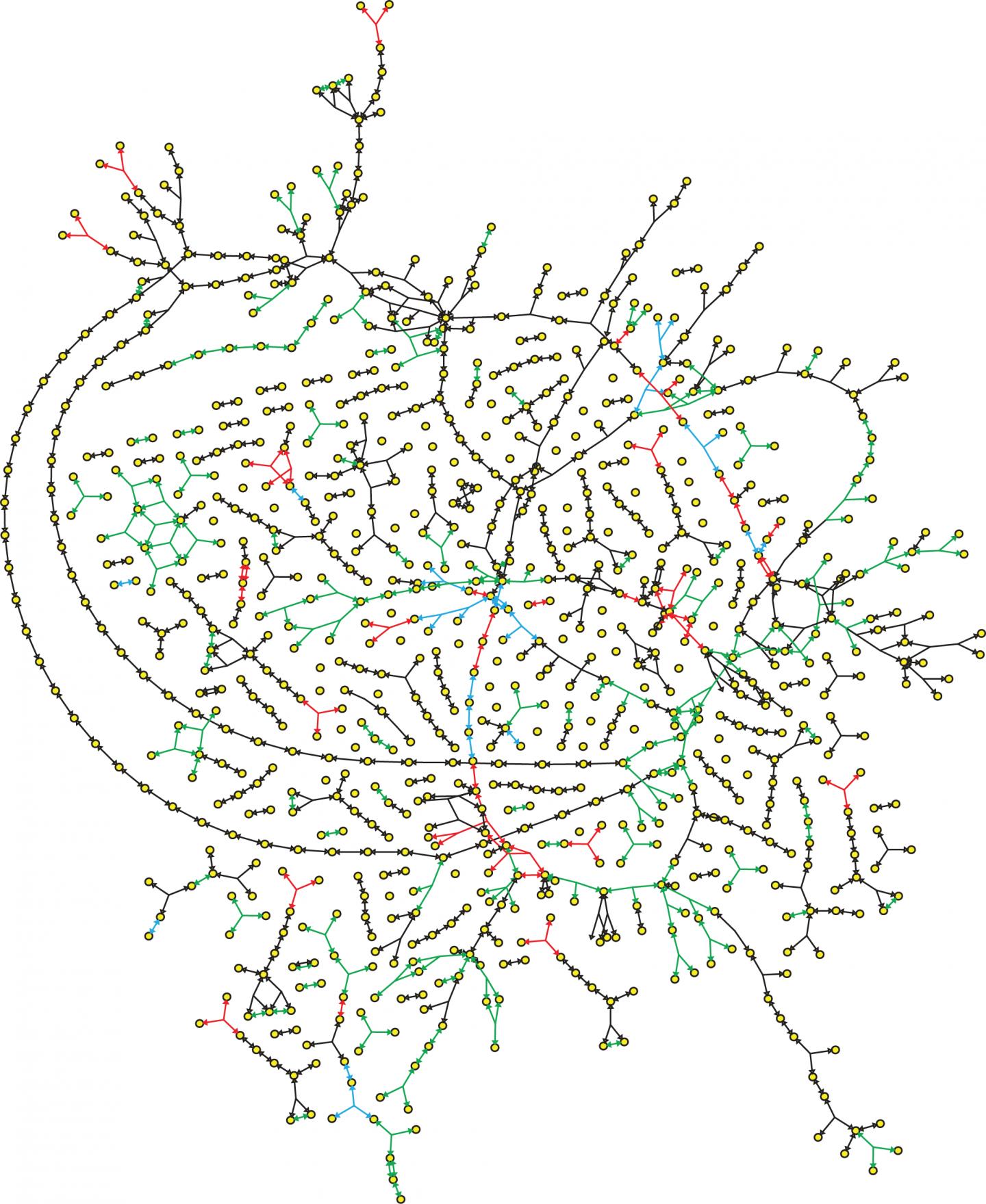 This image from Boston College researchers depicts the first curated, genome-scale metabolic network of the lethal bacterium Streptococcus pneumoniae; a major cause of illness around the world. Each node represents a metabolite; each branch represents a metabolic gene. Integration of genome-wide data reveals that the phenotypic stress network (red) and the transcriptional stress network (green) consist of distinct gene-sets, undermining the widely held assumption that genes that change in expression upon environmental disturbance must also phenotypically matter.

Central to understanding why bacteria become antibiotic resistant is knowing how bacteria respond to the drugs trying to kill them. In a new study, Boston College researchers report that antibiotics disrupt the genetic defensive responses in lethal bacteria.

When facing a common – or historic – threat such as deprivation of nutrients, the deadly bacterium Streptococcus pneumoniae exerts a highly organized response – one influenced by the bacteria’s genetic evolution and powered by genes that respond cooperatively to stress, the researchers found. But when confronted with antibiotics – a relatively new form of stress – the bacterium mounts a confused defense, according to the study “Antibiotics Disrupt Coordination Between Transcriptional and Phenotypic Stress Responses in Pathogenic Bacteria,” published today in the journal Cell Reports.

“We show that nutrient stress results in a highly organized response from the bacterium,” said Associate Professor of Biology Tim van Opijnen, the study’s principal investigator. “It basically seems to recognize the stress and knows how to deal with it.

“But the response to antibiotics was highly disorganized, showing that the organism has difficulties with this stress, trying out all kinds of unrelated things to come to a solution and overcome the stress,” he said. “This shows that the bacterium is far less familiar with antibiotics, not ‘knowing’ how to respond appropriately.”

Van Opijnen, whose data-driven research has helped to establish an understanding of how bacteria rely on underlying genetic networks to function, said the findings may advance the development of new drugs and also help predict how bacteria evolve, adapt and become resistant to antibiotics.

Van Opijnen and co-authors Karen Zhu, a BC doctoral student, and former post-doctoral researcher Paul Jensen, now at the University of Illinois, combined large quantities of experimental data with a new, large-scale computational model they developed to produce new insights and challenge some long-held assumptions about the interplay between bacteria and the drugs designed to treat them.

S. pneumoniae kills approximately 1.5 million people annually. In prior research, van Opijnen and colleagues have revealed that different strains of the bacterium respond uniquely to antibiotics. This time, the research team looked at how strains respond to different stressors. The team employed two analytical approaches – one in use for many years and one developed in the van Opijnen lab.

The team used a process known as RNA sequencing, or RNA-Seq, to assess bacterial genes that are provoked to change, a process known as transcription. This activity has long been viewed as central to understanding how bacteria combat antibiotics and other stressors.

The team paired that analysis with its own technique: transposon insertion sequencing, or Tn-Seq. Developed by van Opijnen, Tn-Seq combs through millions of genetic sequences and singles-out gene functions in bacteria. The advantage of Tn-Seq is that it is able to begin to pinpoint which genes play the most important defensive roles.

That assumption has been difficult to test, said van Opijnen. But with Tn-Seq, van Opijnen has the ability to assess the importance of a gene in a specific condition.

“We found that you cannot assume that change in the activity of a gene means the gene is important,” said van Opijnen. It was a surprising finding, he said. After all, why would a change in gene activity take place if it was not important to the organism’s survival?

Part of the answer may be in the collaborative nature of the way genes work across the entire genome of a bacterial strain, van Opijnen said. “They collaborate and corroborate to perform functions, to resolve into a specific phenotype,” he said. “So there is a relationship as genes all work with each other in pathways, or networks; they cooperate with each other.”

The researchers constructed a metabolic model of the coordinated response to deprivation, which placed the responding genes in close proximity to each other. When challenged with antibiotics, the model shows that the response of the physical network breaks down in disorganization and those genes are no longer in close proximity.

“Bacteria use these types of regulation to fight against stress,” Zhu said. “In terms of nutritional depletion, because they have responded to this type of stress over the course of their evolution, the bacteria ‘know’ how to coordinate this activity. But with a relatively new invasive stressor, like an antibiotic, bacteria may not be able to figure out a way to produce a coordinated response.”

In a search for reasons why certain types of bacteria become resistant to antibiotics, the researchers have established a new approach to understanding why antibiotics succeed in combatting bacterial infections.

“By combining computational and large-scale experimental work, we’ve built a model to get the first, basic understanding of how known and unknown stress is processed by bacteria,” said van Opijnen. “That’s critical because it makes it a stepping stone to a new intervention at some point in the future. If we can understand how stress is processed, we can come up with a better way to develop a new stressor to break an organism, or eradicate it.”