Polyadenylation is thought to be involved in the degradation and quality control of bacterial RNAs but relatively few examples have been investigated. Researchers at the CNRS used a combination of 5΄-tagRACE and RNA-seq to analyze the total RNA content from a wild-type strain and from a poly(A)polymerase deleted mutant. A total of 178 transcripts were either up- or down-regulated in the mutant when compared to the wild-type strain. Poly(A)polymerase up-regulates the expression of all genes related to the FliA regulon and several previously unknown transcripts, including numerous transporters. Notable down-regulation of genes in the expression of antigen 43 and components of the type 1 fimbriae was detected. The major consequence of the absence of poly(A)polymerase was the accumulation of numerous sRNAs, antisense transcripts, REP sequences and RNA fragments resulting from the processing of entire transcripts. 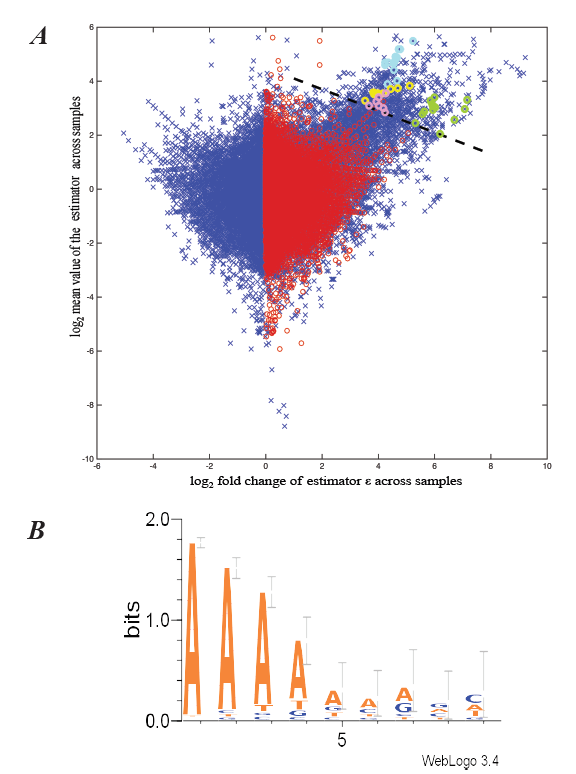 A) All unmapped sequences at 3′ end of reads were detected in the wt and the pcnB strains. The A content of tails located at the same position is calculated in each strain by using the estimator (Materials and Methods) giving for each tail an ε value. The fold change between these two ε is represented as a function of their mean value for each tail (blue dot). The left part of the plot is reported onto the right side by symmetry around the vertical axis in the form of red dots. This reveals a clear asymmetry in the upper-right quadrant that corresponds to loci with A-rich unmapped tails observed in larger amounts in the wild-type strain corresponding to polyadenylation. Points falling into the left half correspond to cases with more or A-richer tails in the pcnB strain. We performed this estimator analysis restricting ourselves to reads with unmapped tails of 10 nt or less because inclusion of longer tails in the estimator increased noise by reducing the asymmetry of the cloud of points. Reduction of the asymmetry by increasing unmapped tail length suggests that longer tails often correspond to artifactual chimeric reads in the two strains, e.g. made up of two of more fragments mapping at different locations and unrelated to polyadenylation. The dashed oblique line represents the chosen selection threshold (y > -0.4 x + 4.5). Clusters of unmapped 3’ ends corresponding to sibD, rplT, rpmF and frr are in cyan, green, yellow and pink respectively. B) Composition of the unmapped 3′ ends in the wt strain. Weblogo representation of the 878 unmapped 3′ ends given in Fig S5A using WebLogo 3.4.

A new algorithm to analyze the position and composition of post-transcriptional modifications based on the sequence of unencoded 3΄-ends, was developed to identify polyadenylated molecules. Overall these results shed new light on the broad spectrum of action of polyadenylation on gene expression and demonstrate the importance of poly(A) dependent degradation to remove structured RNA fragments.