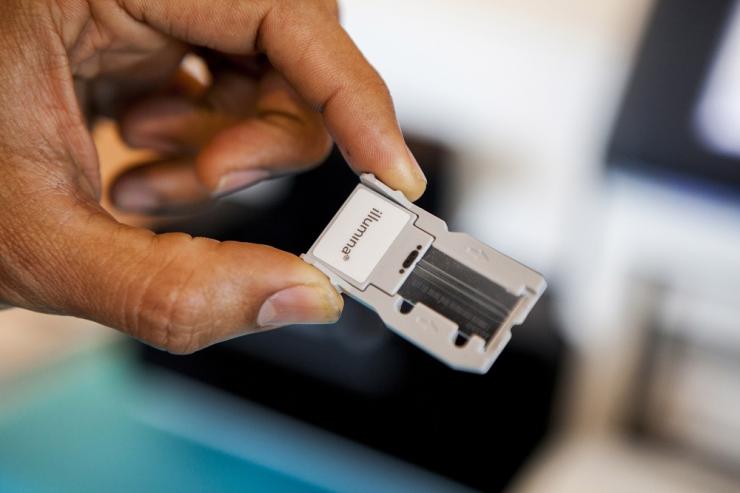 Suresh Chintalapati, an inside sales consultant with Illumina, displays a flow cell, the slide on which DNA is sequenced in the Miseq, a their bench top DNA sequencing machine, during a symposium on “The Future of Genomic Medicine” at Scripps Seaside Forum in La Jolla, California March 6, 2014

A genomic data science course designed by John Hopkins University would soon hit massive online open course platform Coursera.org, a Forbes report revealed on Monday.  The six-course specialisation will cover the basics of molecular biology, DNA and RNA sequencing, and computing and statistics for next generation sequencing, according to Coursera. The course will also delve into Python programming, and Bioconductor and Galaxy environments.

The course is targeted at students, postdocs and scientists who want to brush up on genomics and precision medicine. Students with some programming experience and working knowledge of mathematics and biology are eligible for the course.

“Students can sign up now, but they’ll have many chances to take the series. Once it launches, the classes will run every month, forever,” Steven Salzberg, professor of Biomedical Engineering, Computer Science, and Biostatistics at Hopkins, wrote in the Forbes report. Salzberg was one of the instructors tapped to teach the course.

Salzberg added that he and the other instructors are currently adding the finishing touches to the course videos, and are creating quizzes and projects as well. Hopkins jumped on the MOOC bandwagon n 2014 with a Data Science programme.

Genomics is the study of an organism’s genetic makeup, but on a larger scale. The United States Environmental Protection Agency, or EPA, describes the area of genetics as “as the study of all the genes of a cell or tissue, at the DNA (genotype), mRNA (transcriptome), or protein (proteome) level.”

The use of MOOC and crowdsourced platforms for education, including audio streaming sites, has grown tremendously over the years. Audioboom, for instance, has been noted by a number of education resource Web sites, including EdModo and We Are Teachers, and learning institutions such as Sandagogy in the United Kingdom and Fractus Learning as one of the best tools for facilitating learning opportunities among students.

Coursera, meanwhile, has had experience in partnering up with crowdfunding community Amara in 2012, according to Eduk West. In an editorial last year, Eduk West also noted that Coursera has enlisted the help of its global audience to contribute subtitles in their mother tongue for the course videos.

Citing a study from Sandler Research, Campus Technology reported that the global market for MOOCs will expand at a compound annual growth rate of 56.61 percent between 2013 and 2018. According to EdSurge, the number of universities offering MOOCs last year has doubled to 400 universities. The total number of courses these MOOCs offer have also swelled to 2,400. MiriadaX, meanwhile, was the first non-U.S. MOOC provider to gain 1 million registered users.