from the Cornell Chronicle By Krishna Ramanujan

A new Cornell study examines how genetic differences among individuals impact cellular stress, a first step in understanding how this stress response relates to human diseases, such as diabetes.

The endoplasmic reticulum (ER) is a part of the cell involved in producing proteins, folding them for proper function and sending them out to their final destinations. But when proteins misfold and accumulate in the ER – a phenomenon called ER stress – genes are activated to clear out the buildup. When these genes fail to correct ER stress, cells die, and diseases, such as diabetes and some neurodegenerative conditions, may worsen.

“Right now, when ER stress is targeted by a therapy, that treatment impacts the whole pathway,” said Clement Chow, the paper’s first author and a research associate in the labs of co-authors Andrew Clark and Mariana Wolfner, professors of molecular biology and genetics.

“Now, we can think about more precise, personalized therapies that target the most variable genes that lie in critical control points of the pathways,” Chow added.

In the study, the researchers examined genes from eight diverse mouse strains and their hybrids, representing a wide range of genetic variation found in laboratory mice. They used a standard laboratory procedure to induce ER stress and applied a method called RNA-sequencing to measure and compare gene expression in cells with and without ER stress.

The researchers discovered that the expression of hundreds of genes varied in response to ER stress across the eight mouse strains. Interestingly, these genetic differences did not occur in genes that deal directly with ER stress, but rather in downstream genes that mediate the effects of ER stress on cellular processes. 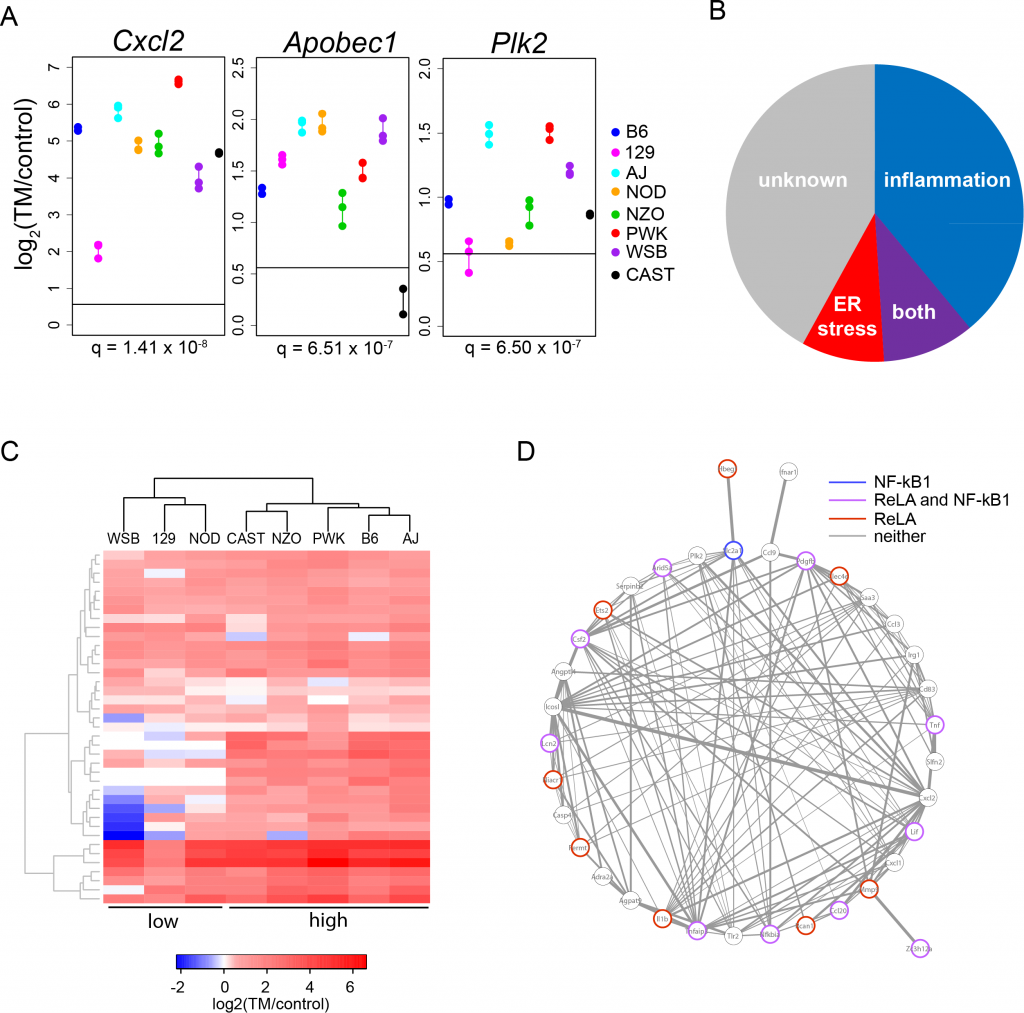 These findings made sense because the ER’s functioning is crucial to cell life, while smaller changes in the expression of downstream genes might not completely shut down important pathways, and thus could be tolerated, Chow said.

The findings also revealed that much of the individual variation in genetic response to ER stress occurs in genes that regulate inflammation. This is an important finding as inflammation is known to be an important component in the severity of many diseases, though the connection between disease and inflammation is complex.

“We find big differences among individuals in the responses by these inflammation genes, which suggests there could be clinically relevant variability in people’s response to inflammation with regard to ER stress,” said Chow.

The researchers determined ER stress responses by measuring RNA, a genetic molecule that is transcribed from DNA, and that holds the instructions for creating proteins. Measuring RNA serves as a proxy to assess amounts of protein, which provides information about ER stress.

Xu Wang, a research associate in Clark’s lab, and David Riccardi, a former graduate student in the field of genetics, genomics and development, are co-authors.

The study was funded by a Nancy and Peter Meinig Family Investigatorship in the Life Sciences.