in Publications, Workflows 28 days ago 483 Views 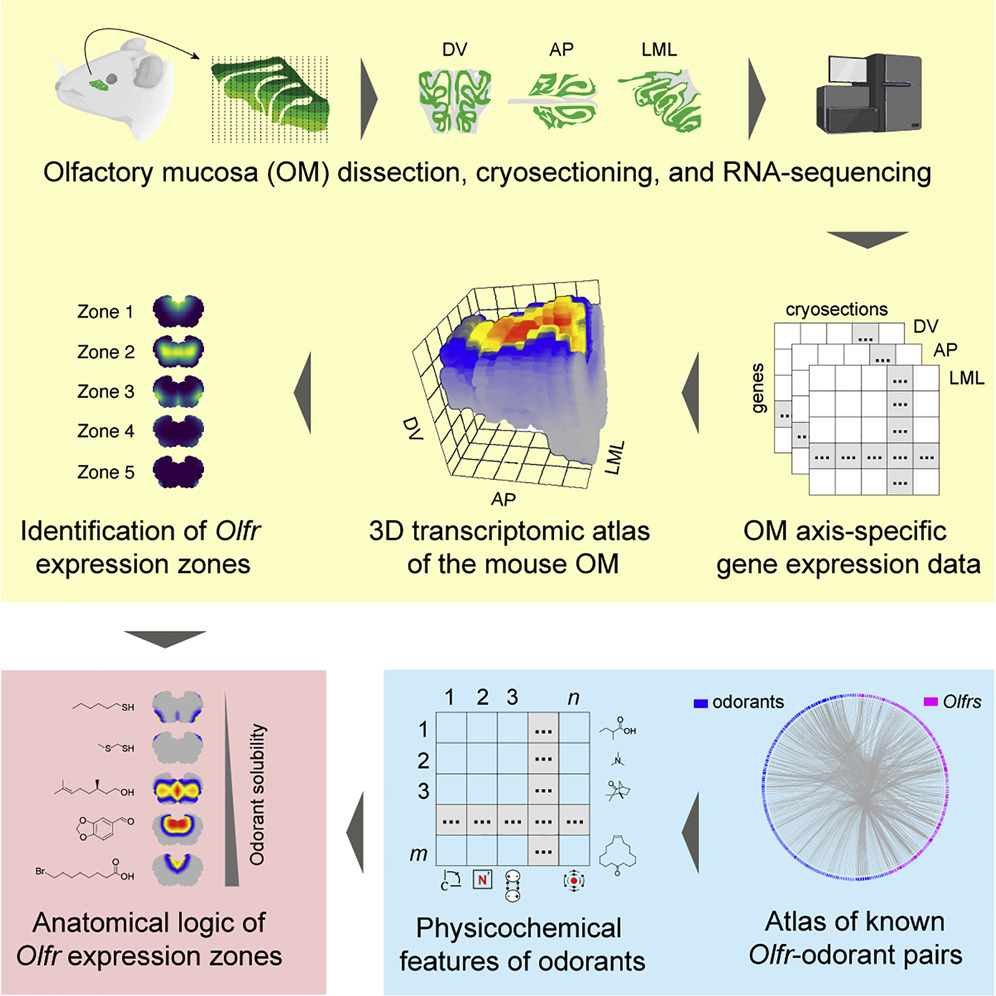 The sense of smell helps us navigate the environment, but its molecular architecture and underlying logic remain understudied. The spatial location of odorant receptor genes (Olfrs) in the nose is thought to be independent of the structural diversity of the odorants they detect. Using spatial transcriptomics, a team led by researchers at Helmholtz Zentrum München create a genome-wide 3D atlas of the mouse olfactory mucosa (OM). Topographic maps of genes differentially expressed in space reveal that both Olfrs and non-Olfrs are distributed in a continuous and overlapping fashion over at least five broad zones in the OM. The spatial locations of Olfrs correlate with the mucus solubility of the odorants they recognize, providing direct evidence for the chromatographic theory of olfaction. This resource resolves the molecular architecture of the mouse OM and will inform future studies on mechanisms underlying Olfr gene choice, axonal pathfinding, patterning of the nervous system, and basic logic for the peripheral representation of smell.

Application of TOMO-seq to mouse OM

(A) Experimental design. TOMO-seq was performed on nine tissue samples, from which three were sliced along the dorsal-ventral axis (DV), three along the anterior-posterior axis (AP), and three along the lateral-medial-lateral axis (LML). (B) Boxplots showing the distributions of Spearman’s correlation coefficients (rho) between replicates in each axis. (C) Heatmaps showing Spearman’s correlation between gene expression patterns at different positions along the three axes. (D) Number of detected genes along each axis separately or across the whole dataset. Genes were considered as detected when they had at least one normalized count in at least 10% of the samples from one axis. (E) Heatmaps of log10 normalized expression (after combining the three replicates per axis) of OM canonical markers along the three axes (GBCs, globose basal cells; HBCs, horizontal basal cells; iOSNs, immature olfactory sensory neurons; mOSNs, mature olfactory sensory neurons; RESs, respiratory epithelium cells; RPM, reads per million; SUSs, sustentacular cells). (F) Normalized expression of canonical OM spatial marker genes along the three axes. Red line shows fits with local polynomial models.

Availability – The 3D gene expression atlas of the mouse OM is available at the web portal: http://atlas3dnose.helmholtz-muenchen.de:3838/atlas3Dnose