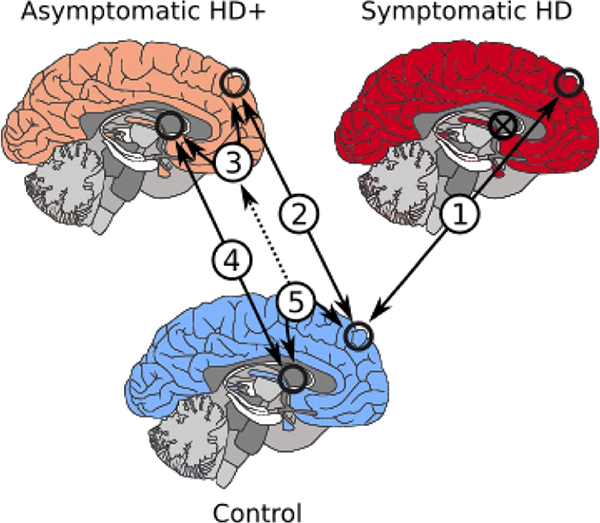 The part of the brain that selectively degenerates in people with Huntington’s disease (HD), called the striatum, is almost entirely destroyed in the late stages of the disease. Brain samples from mutant HD gene positive individuals who had not yet developed symptoms by time of death are extremely rare. As a consequence, very little is known about the active disease process that causes the devastating symptoms of HD.

In a new study, researchers from BUSM analyzed samples from the striatum of two mutant HD gene positive individuals and compared the gene expression patterns in this region to the prefrontal cortex, which is relatively spared in HD. “Our data suggest that the striatum experiences massive inflammation in HD even before symptoms appear, and exhibits a similar gene expression pattern to that observed in prefrontal cortex. Patterns unique to the striatum are also observed,” explained corresponding author Adam Labadorf, PhD, director of the BU Bioinformatics Nexus.

Post-mortem human brain samples from the prefrontal cortex and striatum were dissected and subjected to transcriptomic profiling using high throughput sequencing technology (RNA-Seq). The sequencing data was analyzed using bioinformatic analysis techniques to understand which genes and biological processes were altered when comparing different brain regions in individuals with HD and controls.

Despite the more than 25 years of intense research following the discovery of the HD gene, there are still no effective therapies to cure or ameliorate symptoms. According to the researchers, this is in large part due to our lack of understanding of the active disease process in the human brain. “This study presents the most detailed analysis to date of the active disease process in the primarily affected brain region of HD, and although these results do not directly suggest any novel therapies, a better understanding of these processes is likely to lead to them.”

In addition to extensive inflammatory processes, a separate pattern in the data suggest the HD striatum is actively undergoing some form of neurogenesis during the disease process. While the authors stress that much more investigation is needed to support these findings, they nonetheless suggest the tantalizing possibility that neurons are actively being born in the prodromal HD striatum, possibly to offset neuronal loss that precedes symptoms. “The idea that active neurogenesis occurs in the adult brain is controversial, but could lead to exciting discoveries into the innate regenerative capabilities of the central nervous system.”