Researchers find some neurons in the autistic brain preferentially express the copy of a gene inherited from one parent over the other.

Many researchers have assumed that most cells express both copies of a gene equally. Studies in cultured cells suggest this might not always be the case. The new study is the first to provide evidence of this phenomenon in the brains of mice and monkeys.

“This really can shape how mutated genes are expressed at the cellular level,” says lead researcher Christopher Gregg, assistant professor of neurobiology and anatomy at the University of Utah in Salt Lake City.

The work has important implications for autism: Most mutations seen in people with the condition affect only one copy of a gene. So the same mutation could have different effects depending on which parent’s copy carries the mutation.

The findings could help to explain why certain mutations linked to autism affect some people more than others, says Janine LaSalle, professor of medical microbiology and immunology at the University of California, Davis, who was not involved in the study.

People inherit one copy of a gene from each parent. Conventional wisdom holds that, with some exceptions, these copies are expressed equally throughout the body.

In the new study, Gregg’s team first bred mice that are genetically identical — that is, all of their paternal copies look the same, and so do their maternal copies. The researchers then tracked the copies’ expression in the liver, muscle and the dorsal raphe nucleus — a brain region that secretes the chemical messenger serotonin.

They found several genes in each tissue that favor expression of one parent’s copy over the other.

“It seems that there really is a lot more flexibility to the gene regulation landscape than was appreciated,” says Christopher Mason, associate professor of physiology and biophysics at Weill Cornell Medical College in New York City, who was not involved in the study.

The presence of a bias may also vary over time. For example, five days after birth, cells in the dorsal raphe nucleus favor one parent’s copy over the other for 88 percent of mouse genes. By 15 days of age — the mouse equivalent of adolescence — this number drops to 11 percent. The patterns’ changeability suggests that certain environmental factors can alter them.

It would be interesting to look at even more time points in young mice, including in utero, Mason says. Studies have shown that some autism genes are particularly active during mid-fetal development.

The researchers then looked at the brains of three strains of mice with a mutation in a gene that shows preferential expression. Using a marker that lights up actively expressed genes, they saw patches of expression throughout the brain. This suggests that when one copy of a gene is mutated, some cells preferentially express the mutated copy.

Confirming the result in the brain adds to the study’s validity, because RNA sequencing is prone to error, says LaSalle. “RNA sequencing alone wouldn’t have convinced me,” she says.

The researchers also sequenced DNA from 10 sets of macaque monkeys and mRNA from the brains of their babies. They tracked the expression of 821 genes and found 70 that appear to show a parental preference.

Three of the genes, DEAF1, NTRK2 and PTPRZ1, are associated with autism. Many others have ties to bipolar disorder, intellectual disability, schizophrenia, depression and attention deficit hyperactivity disorder.

Only 6 of the 70 genes show differential expression in both mice and primates, reinforcing the need to look beyond mice for relevance to people, Gregg says.

The researchers then looked at DEAF1 expression in postmortem brain tissue from 12 people. They found that in people, too, DEAF1 shows preferences for certain copies across four brain regions.

It would be interesting to trace whether people’s brains consistently favor a mutated or typical copy of an autism risk gene, says LaSalle. To answer to that question, researchers would need access to genetic information from the parents of the brain donor, which is currently unavailable. 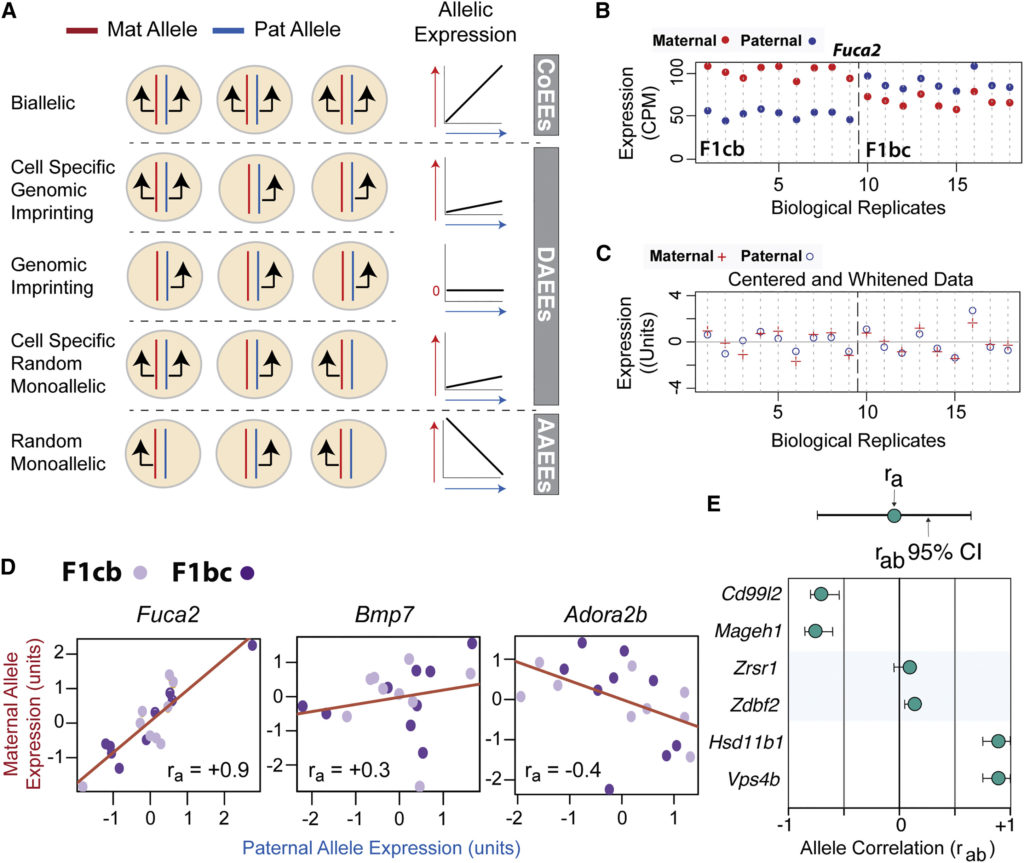 (B and C) Example of maternal (red dot) and paternal (blue dot) allele expression patterns across RNA-seq biological replicates (n = 18) for Fuca2 in the DRN of adult female F1cb and F1bc mice (B). Note the correlated expression of the two alleles despite complex cross and parent-of-origin effects. After centering the F1cb and F1bc RNA-seq data, the variance in the expression levels of the maternal (red plus) and paternal (blue circle) alleles reveals correlated allelic expression patterns (ra = +0.9) (C).

(E) Schematic of the presentation of the observed ra and estimated rab 95% CI for individual genes. Below are examples of random monoallelic X-linked genes with AAEEs (cd99l2, Mageh1), canonical imprinted genes with DAEEs (Zrsr1, Zdbf2), and autosomal genes with allele CoEEs (Hsd11b1, Vps4b).