Multiple myeloma (MM) is a malignancy of plasma cells, with a median survival of 6 years. Despite recent therapeutic advancements, relapse remains mostly inevitable, and the disease is fatal in the majority of patients. A major challenge in the treatment of patients with relapsed MM is the timely identification of treatment options in a personalized manner. Current approaches in precision oncology aim at matching specific DNA mutations to drugs, but incorporation of genome-wide RNA profiles has not yet been clinically assessed.

These results show that a comprehensive sequencing approach can identify viable options in patients with relapsed and/or refractory myeloma, and they represent proof of principle of how RNA sequencing can contribute beyond DNA mutation analysis to the development of a reliable drug recommendation tool.

Schematic of the trial with results, limitations, and proposed solutions 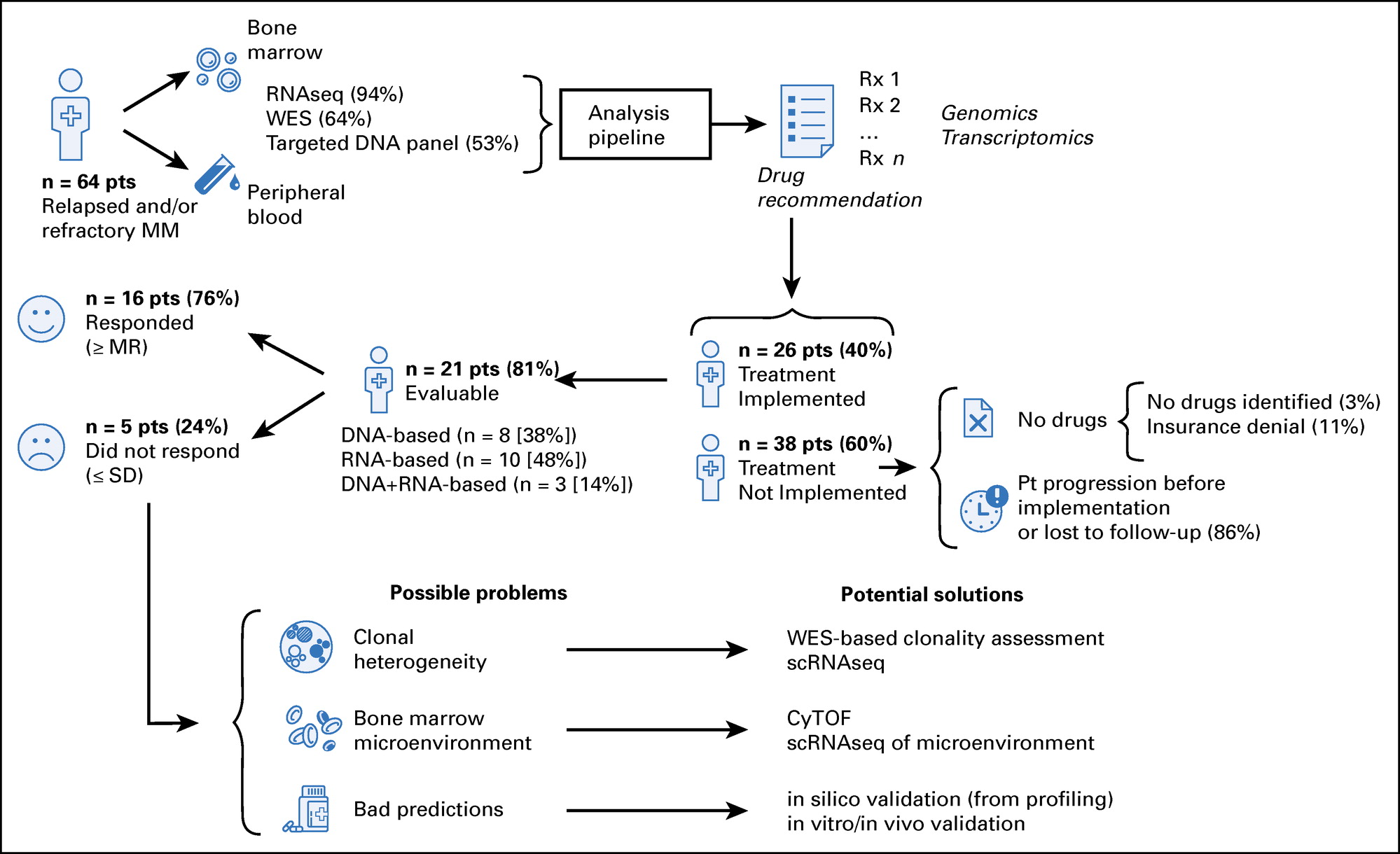 We recruited 64 patients (pts) with relapsed and/or refractory multiple myeloma (MM) treated at the Mount Sinai hospital. We obtained RNA sequencing (RNAseq) for 94%, whole-exome sequencing (WES) for 64%, and targeted DNA panel data for 53% of the pts. Sequencing (Seq) data were analyzed by our pipeline, and drug recommendation reports were produced. Treatment was implemented in 40% of the pts, and 81% of these were evaluable.. According to IMWG criteria, 76% of the pts had a clinical response (MR and above, where MR = minimal response and corresponds to a 25% reduction of disease marker), whereas 24% of the pts had stable disease (SD) or worse. Problems to address to improve recommendations include assessment of clonal heterogeneity, analysis of bone marrow microenvironment, and extension of reference data to include MM-specific drug profiles from in vitro and in vivo models. Treatment was not implemented in 60% of the pts, because either no drugs were identified, because insurance denied the proposed drugs, or because of rapid progression of the patient before the results of sequencing were available. CyTOF, mass cytometry; scRNA, single-cell RNA.