A team of researchers at Baylor College of Medicine, the Texas Heart Institute and Texas Children’s Hospital has developed a powerful new approach to understand the formation of new neurons in the mammalian adult brain. Published in the journal Cell Reports, this work opens exciting new pathways that can be further developed to repair malfunctioning brain circuits.

“The mammalian brain is a complex tissue composed of diverse cell types. However, despite rapid advances in the field of neuroscience, only a limited number of cell types in the brain are known and well-characterized,” said lead author Dr. Benjamin Arenkiel, associate professor of molecular and human genetics and neuroscience at Baylor College of Medicine and investigator at the Jan and Dan Duncan Neurological Research Institute at Texas Children’s Hospital. “Identifying all cellular subtypes is crucial to unravelling how brain circuits function and will yield insights into brain activity under diseased and injured conditions.”

In this study, Arenkiel and his colleagues described an innovative approach that identified novel cellular targets and genetic pathways involved in the wiring of adult-born neurons into existing brain circuits.

Researchers now know that the brain is not just composed of four or five cell types performing generic roles. Most circuits consist of unique subtypes of cells, many of which currently are uncharacterized, explained Arenkiel. For instance there are possibly thousands of functional subtypes within a particular class of neurons.

“Therefore, the first task to begin understanding brain circuits is to identify all the cellular players,” said Arenkiel, who also is a McNair scholar at Baylor College of Medicine. “This would allow us to genetically probe them to reveal their biological functions, a necessary knowledge to fix these circuits when something goes wrong.”

In most adult mammals, only two regions of the brain, the hippocampus and the olfactory bulb (OB), have been shown to integrate new neurons into existing brain circuits. Arenkiel joined forces with co-corresponding author Dr. James Martin, professor and Vivian L. Smith Chair in Regenerative Medicine at Baylor College of Medicine and director of the Cardiomyocyte Renewal Laboratory at Texas Heart Institute. The team applied a relatively new technology, single cell RNA sequencing, to identify novel cellular subtypes in the OB.

To perform single cell RNA sequencing, Burak Tepe, a graduate student in the Arenkiel lab and one of the primary authors of this paper, and colleagues prepared a single-cell suspension by disassociating brain tissue using enzymes. This mixture was sorted in a microfluidic chamber in which every cell was co-encapsulated in microparticles (beads) with unique barcodes that kept track of the cellular origin of each mRNA transcript.

Using this profiling strategy, they painstakingly generated a library of mRNA transcripts for 50,000 cells in the OB. This information revealed that the OB comprises approximately 30 different cell types that included 18 different types of neurons, as well as many other non-neuronal cells such as astrocytes, oligodendrocytes, vascular and immune cells. 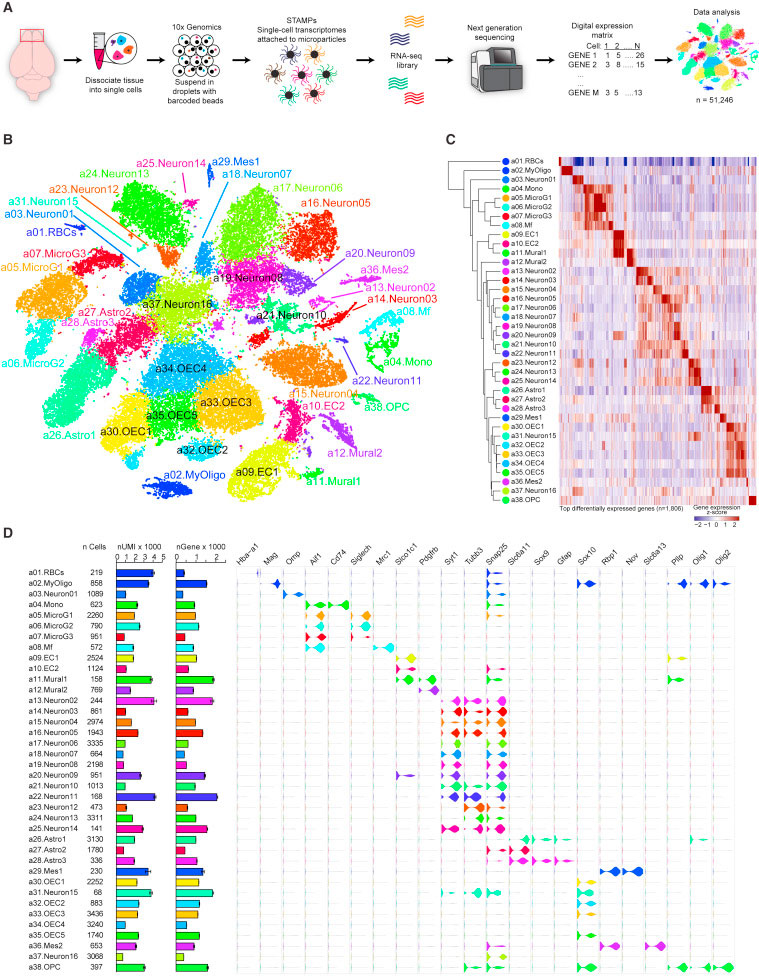 (A) Schematic view of the experimental workflow. (B) Cellular composition of the olfactory bulb was visualized using t-distributed stochastic neighbor embedding (t-SNE). Individual single-cell transcriptomes were colored according to cluster identity in (B)–(D). (C) Dendrogram depicting hierarchical relationships between distinct cell populations. Heatmap illustrating the genes most highly enriched in each cluster, with each column representing a gene and each row representing average expression level of that gene in each cluster. (D) Graph showing number of cells per cluster, number of unique molecular identifiers (UMIs) per cluster (mean ± SEM; scale is in thousands), and number of genes detected per cluster (mean ± SEM; scale is in thousands). Violin plots show expression of cell-type-specific marker genes for each cluster.

Additionally, the team uncovered genes and/or pathways that are chronologically turned “on” or “off” in these lineages during brain development. This study leverages the combined power of single-cell RNA sequencing analysis of adult-born neurons with bioinformatics to compare how gene expression profiles from different neuronal lineages progress over time.

This powerful method has allowed the researchers to recreate a putative developmental trajectory (“pseudo-timeline”) of all the neuronal lineages in the OB – from migrating neural progenitors to fully functioning mature neurons – along with detailed information of when and where specific genes or genetic networks are turned ‘on’ or ‘off.’ Consistent with this, the researchers found specific subtypes of neurons were differentially enriched or depleted in response to distinct sensory cues, such as particular odors.

“In addition to identifying key players and providing crucial mechanistic insights into adult neurogenesis in OB, we think this study has a broader impact because other researchers can now use this approach to identify and tease out the function of new neuronal circuits in other parts of the adult mammalian brain,” Arenkiel said.

“The exciting thing about this study is the discovery of heterogeneity in the olfactory neurons and the observation that certain cell populations respond uniquely to environmental cues, in this case different odors,” said Martin. “This work is an example of the power of the collaborative environment at Baylor College of Medicine. Combining the expertise of my lab, a cardiovascular research lab with single cell genomics capability, and Dr. Arenkiel’s neurobiology lab resulted in important discoveries.”