When the body’s immune response to an infection gets out of control, the result can be sepsis, a life-threatening condition in which an overwhelming inflammatory response can lead rapidly to failure of multiple organs and death.

In a new study, researchers at UC Santa Cruz have identified a long noncoding RNA (lncRNA) molecule that regulates the expression of pro-inflammatory genes in immune system cells called macrophages and affects the susceptibility of mice to septic shock.

This lncRNA, called GAPLINC, was previously studied for its role in cancer, but it turns out to be the most highly expressed lncRNA in macrophages, which play a central role in inflammation. Susan Carpenter, assistant professor of molecular, cell and developmental biology at UC Santa Cruz, said GAPLINC stood out when her lab performed RNA sequencing of human macrophages and their precursors, white blood cells called monocytes.

Subsequent experiments showed that reducing or eliminating GAPLINC led to enhanced expression of inflammatory genes in both mouse and human cells. Paradoxically, this effect protected mice from endotoxic shock and death in a mouse model of sepsis. The difference was dramatic, with all of the normal (“wildtype”) mice dying within a day, while all of the mice in which GAPLINC was knocked out survived.

“Our hypothesis was that the knockout mice would do worse in a model of endotoxic shock, so we were surprised to find that they did much better,” said Carpenter, the corresponding author of a paper on the new findings published February 1 in Proceedings of the National Academy of Sciences.

Noncoding RNAs are RNA molecules that are transcribed from the genome but are not translated into a protein, and lncRNA is the largest class of noncoding RNA. In recent years, scientists have identified thousands of lncRNAs in mammalian genomes that regulate gene expression in different biological processes. GAPLINC is one of the few examples of a lncRNA found in both humans and mice.

Apple Vollmers, a graduate student in Carpenter’s lab and first author of the paper, said the team’s RNA sequencing results showed that GAPLINC is highly expressed during the differentiation of monocytes into macrophages.

“We thought initially that it was involved in regulating differentiation, but when we depleted it, that turned on inflammatory genes,” Vollmers said. “It’s a low level of expression, so the genes are not turning on at the same level as when a macrophage is activated in response to a pathogen.” 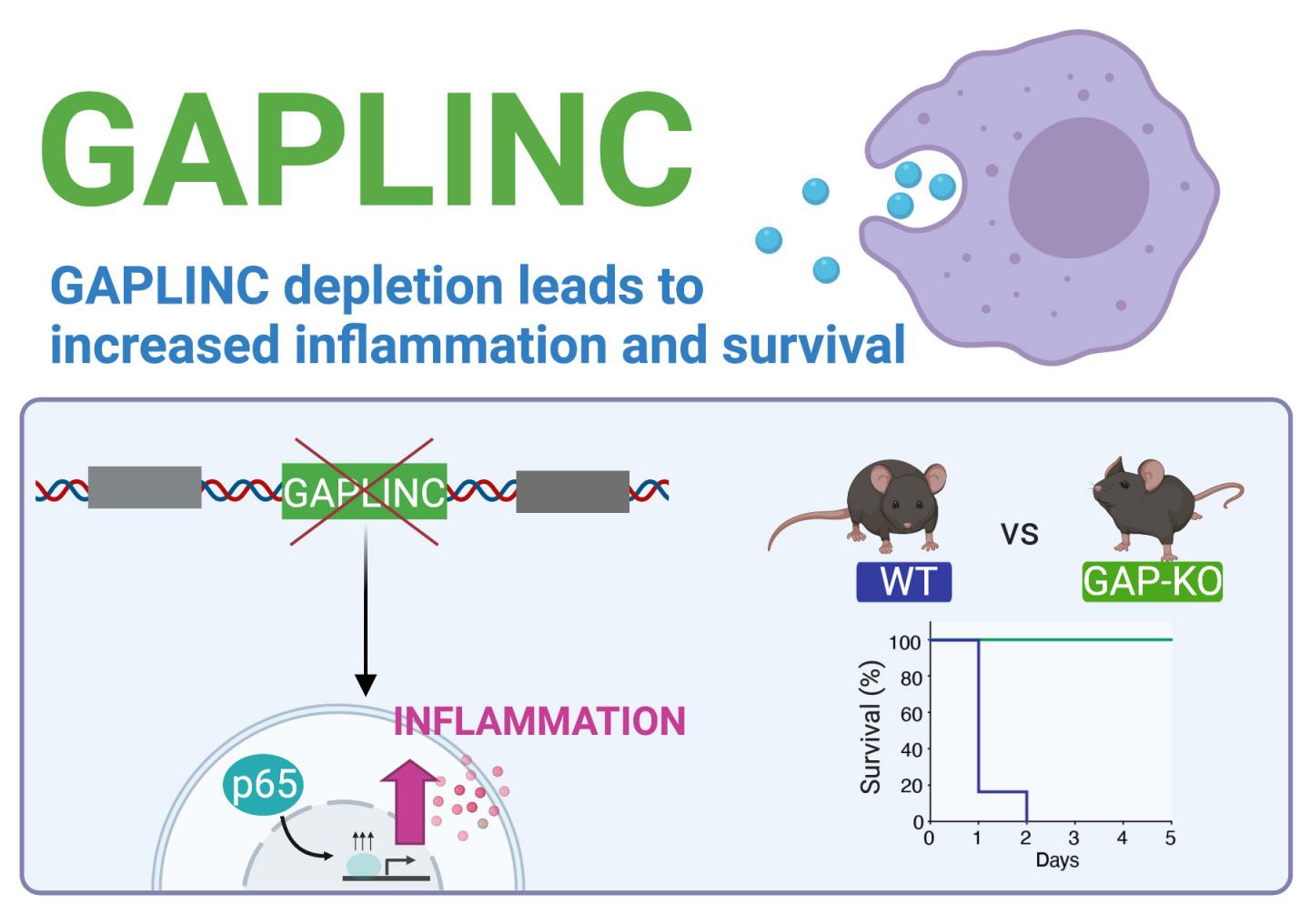 GAPLINC, a highly conserved long noncoding RNA, modulates the immune response during endotoxic shock. Reducing or eliminating GAPLINC led to enhanced expression of inflammatory genes in both mouse and human cells. In a mouse model of sepsis, knockout mice without GAPLINC were protected from endotoxic shock.

The mouse model of sepsis involves exposing mice to a component of gram-negative bacteria called lipopolysaccharide (LPS, also known as endotoxin), which is known to trigger septic shock in bacterial infections. Carpenter said starting from a low baseline level of inflammatory gene expression may make the inflammatory response to LPS less of a shock to the system. “Instead of going from zero to 100, you might go from 10 to 100, and we think that provides some protection, but we’re not sure why,” she said.

Macrophages are among the first cells involved in the body’s response to any injury or infection. They are patrollers and first responders, circulating in the blood as monocytes and differentiating into macrophages that move to sites where they are needed to help fight infection or heal an injury.

“They help turn on inflammation, but they also play an important role in turning it off,” Carpenter said.

In sepsis, the inflammatory response goes into overdrive as cells release a deluge of inflammatory proteins called cytokines. Cytokines are often produced in a cascade, as one cytokine stimulates its target cells to make additional cytokines. Uncontrolled cytokine production is often called a “cytokine storm.” This process also triggers clotting, and blood clots then block the flow of oxygen-carrying blood to critical organs, leading to organ failure and death.

Sepsis can also be triggered by viral infections and may be involved in severe cases of COVID-19.

“The biggest problem with sepsis is that it happens so fast, and once it gets going there are no good treatment options,” Carpenter said.

A better understanding of the role of GAPLINC in controlling the inflammatory response and septic shock could lead to new opportunities for drug development to target sepsis.

“We are a long way from understanding how you would target this therapeutically, but at least we have identified a pathway to home in on,” Carpenter said.