Research from the School of Dental Medicine, the Perelman School of Medicine, and Oak Ridge National Laboratory reveals a mechanism behind the inflammation that is a feature of the common skin disease. 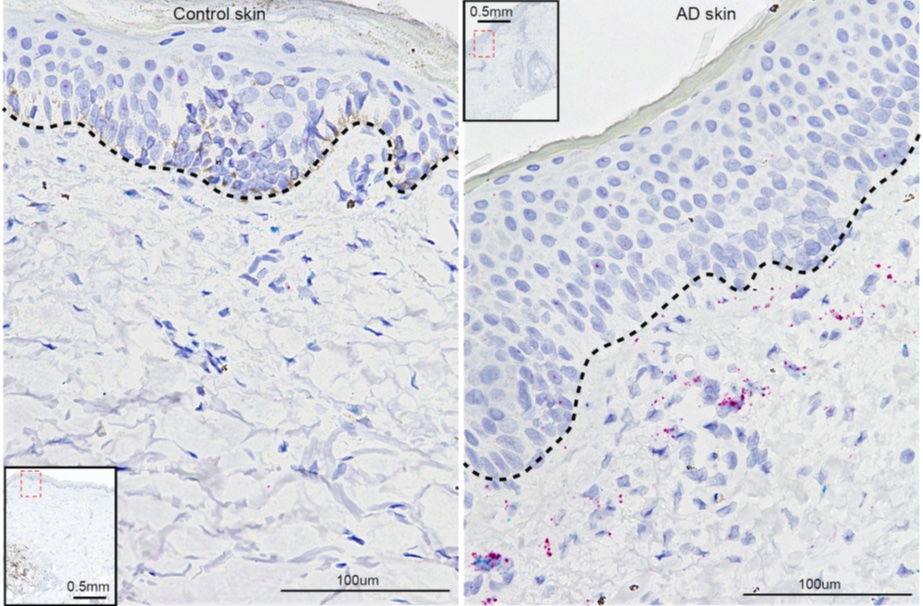 New findings in atopic dermatitis reveal an inflammatory cascade unfolding early in disease development, according to researchers from the School of Medicine, the Perelman School of Medicine, and Oak Ridge National Laboratory. (Image: Courtesy of Kang Ko)

Atopic dermatitis, a common skin condition affecting both children and adults, is often thought of as an inflammatory disease that arises from a breakdown in the barrier function of the skin. Now a new study pinpoints a cascade of inflammatory signaling that precedes the appearance of skin ulcers, shedding light on the early stages of the condition and identifying potential novel molecular targets for therapeutic intervention.

“You have researchers in the dental school noticing a skin condition, broadening their work to the medical school and experts on computational systems biology,” says Dana Graves, a co-corresponding author on the paper and a professor and vice dean for research and scholarship at Penn Dental Medicine. “Without this interdisciplinary collaboration, that initial finding would not have gone anywhere.”

John Seykora, a co-corresponding author and professor of dermatology at the Perelman School of Medicine, seconds that observation. “This shows one of the benefits of being part of a university with experts across fields,” he says. “Our dental school colleagues developed a mouse that manifested a particular skin phenotype, and the question was, What was this and did it resemble any disease we might know? And in the end it did, and it’s providing some novel insights into a very common skin condition in humans.”

The work began in Graves’ lab, with Kang Ko, then a student in the Doctor of Science in Dentistry program and now a Penn Dental Medicine assistant professor, leading an exploration of the role of inflammatory signaling in bone fracture healing in diabetes. A focus was on nuclear factor kappa-B (NF-kB), a master regulator of inflammatory responses. As part of that work, Ko, Graves, and colleagues developed a mouse model lacking an activator of NF-kB signaling, IKKB.

The researchers noticed that these animals developed skin lesions as they became young adults.

“That was interesting to us because these ulcerations looked like an inflammatory event, but we had effectively turned off the activity of NF-kB, which should reduce inflammation,” says Graves. “So this was a paradox.”

To better understand what was driving this response, they sought expertise in skin diseases.

“As someone who studies bone and oral biology, the topic of dermatology was obviously a little different,” says Ko.

Ko and Graves knew of Seykora from a talk he had given about the Cutaneous Phenomics and Transcriptomic core which he directs, part of Penn’s Skin Biology and Diseases Research-based Center housed in Dermatology. When Seykora and colleagues examined the mice, they noted several features quite similar to atopic dermatitis, “albeit the mouse version,” he says.

In particular, they noted skin thickening and an infiltration of certain types of white blood cells that are also seen in human atopic dermatitis. Drilling deeper into how the loss of IKKB was driving these effects, the team performed single-celled RNA analysis, a technique that gives a read out of which RNA transcripts are present in individual cells. They then teamed with computational systems biology experts Daniel Jacobson of Oak Ridge National Laboratory and his student Jean Merlet at the University of Tennessee who, along with other students in Jacobson’s lab, had developed a new explainable-AI based method for analyzing single-cell RNA sequencing data. Together, the team discovered that the cell type that appeared responsible for these effects was fibroblasts, a major component of the skin’s dermis layer and typically thought to support the structural integrity of skin.

“We are excited that these new methods that we have developed for single-cell RNA-seq analysis have led the discovery of such exciting biology implicating the important role that NF-kB plays in fibroblasts in the context of atopic dermatitis,” says Jacobson. “We believe that this type of transdisciplinary collaboration is crucial for solving the challenging problems that we face in complex biological systems.”

Though NF-kB typically promotes inflammation, here, decreased NF-kB activity was paradoxically leading to recruitment of immune cells and associated inflammation. Data from the team’s single-cell RNA analysis pointed to a protein transcription factor called CEBPB as being strongly activated in the fibroblasts lacking IKKB. CCL11 was likewise highly active in these fibroblasts. Also known as eotaxin, CCL11 is a signaling molecule that promotes inflammation by recruiting a class of white blood cells called eosinophils to its location.

“We worked out the mechanism in the mouse,” Seykora says, “then showed that much of it applied in human tissue as well.”

When the researchers compared what they had seen in the mouse cells to skin samples from people with atopic dermatitis, they found similar patterns; CCL11 and CEBPB were both found at higher levels in the affected skin than in unaffected skin. They also conducted parallel experiments in human skin fibroblasts, using an inhibitor to IKKB, and observed that levels of CCL11 rose dramatically.

Moving back to the mouse model, the researchers found that introducing a monoclonal antibody against CCL11 tamped down the inflammatory response they had initially seen in animals lacking IKKB, suggesting that this pathway could be one to target to reduce atopic dermatitis-associated inflammation.

Not only does the work point to a new approach to therapeutic development for atopic dermatitis, but the researchers say it underscores a developing appreciation that fibroblasts play important roles in immune processes in the skin.

“An important finding from our study was fibroblasts can modulate immune cells,” says Ko. “Our results, along with recent reports in other inflammatory conditions, indicate the fibroblasts are important regulators of white blood cells.”

Atopic dermatitis is a disease that typically emerges in childhood, often manifesting along with asthma. Indeed, in the mice, too, the signaling abnormalities the researchers observed occurred in a period corresponding to the animal’s “childhood.” The group’s findings suggest that fibroblasts may be involved during this period in helping to establish appropriate immune signaling in the skin.

“We have viewed NF-kB as a factor that stimulates inflammation, but it could be that, during development, its activation might be important for maintaining homeostasis,” says Graves.

In follow-up research, Graves, Ko, Seykora, and Jacobson are continuing their collaboration, trying to further explore NF-kB signaling in fibroblasts.

“Our goal is to further refine these studies and extend them,” says Seykora. “If all of this bears out, then perhaps we can get people interested in targeting some of these pathways with new treatments.”