In vertebrates, large exons often skip splicing events and are evolutionarily conserved. Scientists from Nagoya University, Japan, led by Associate Professor Akio Masuda, have recently identified the mechanism behind regulated splicing of large constitutive exons which are rich in disordered regions, and their potential involvement in the assembly of transcription factors. They also explained how dual-regulation by two distinct groups of splicing factors ensures phase-separation of large exon-containing transcription factors.

Splicing events, in which non-coding sections of an RNA transcript (an RNA copy of a gene sequence) are spliced out before the RNA is translated into a protein, are crucial for gene expression regulation and protein diversity. In vertebrates, however, large exons, the coding sections of the RNA transcript, are not easily recognized by splicing factors, leading to “exon skipping.”

Interestingly, this is countered by the presence of “intrinsically disordered regions” (IDRs) in large exons, which contain cis-enhancers (non-coding DNA regions which regulate transcription of nearby genes) that aid in their splicing. For years, scientists have been intrigued by the mechanism by which large exons redeem their presence and retention in the course of vertebrate evolution. While there are several reports on the cis-regulation of large exons, studies on trans– regulation (regulation of the expression of distant genes) still lag behind.

In a new study published in the The EMBO Journal, Dr. Masuda and his team examined how transcription factors selectively splice large exons and whether this process is conserved across vertebrate species. They examined numerous RNA-binding proteins (RBPs) for their ability to bind to large constitutive exons (LCEs), or exons present in all proteins with the same function within a gene, and found that LCEs encode for the amino acids, proline and serine, that act as binding sites for “serine/arginine-rich splicing factor” (SRSF3)—a protein-encoding gene—and an RBP called “heterogeneous ribonuclear protein” (hnRNPs), with both regulating the splicing but in opposing ways.

The team used high-throughput data from RNA-sequencing of mouse and human cells depleted of SRSF3 and identified nearly 3000 LCEs that recruited SRSFs (S3-LCEs). They observed that SRSFs preferred to bind to “cytidine-rich motifs” on these exons, which aided the splicing process. Excited by this discovery, they set out to identify a splicing silencer to counter SRSF3 activity, and discovered a group of hnRNPs that inhibited S3-LCE splicing. However, the suppression was minimal and could be masked by SRSF3. “We showed that SRSF3 overrides the splicing-suppressive activity of hnRNP K on large exons,” says Dr. Masuda. 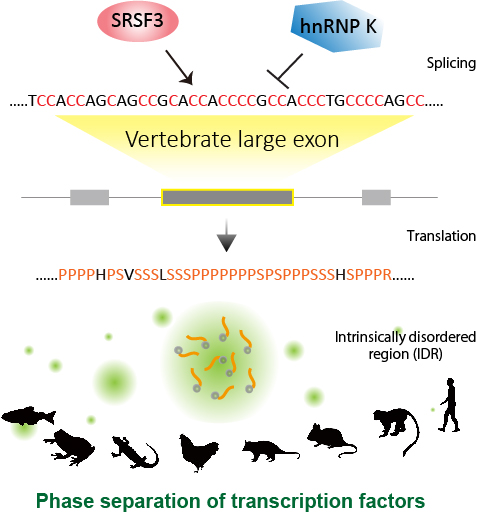 “S3-LCEs are enriched in genes for components of transcription machineries,” explains Dr. Masuda. “It is interesting that they frequently encode for IDRs in transcription factors,” he adds.

Motivated by this observation, the team resolved to investigate further. Using a combination of imaging and phase-separation techniques, they showed that the absence of SRSF3 resulted in the loss of transcription factor IDRs and disrupted their assembly.

“It is possible that layered splicing regulation by hnRNP K and SRSF3 ensures proper phase-separation of these S3-LCE-containing transcription factors in vertebrates,” explains Dr. Masuda.

He believes that their findings can have important implications in the course of vertebrate evolution.

“Our study shows how regulated splicing has prevented the elimination of large exons in the course of evolution,” he concludes.