RNA sequencing reveals what social distancing does to a brain

Have you recently wondered how social-distancing and self-isolation may be affecting your brain? An international research team led by Erin Schuman from the Max Planck Institute for Brain Research discovered a brain molecule that functions as a “thermometer” for the presence of others in an animal’s environment. Zebrafish “feel” the presence of others via mechanosensation and water movements – which turns the brain hormone on. 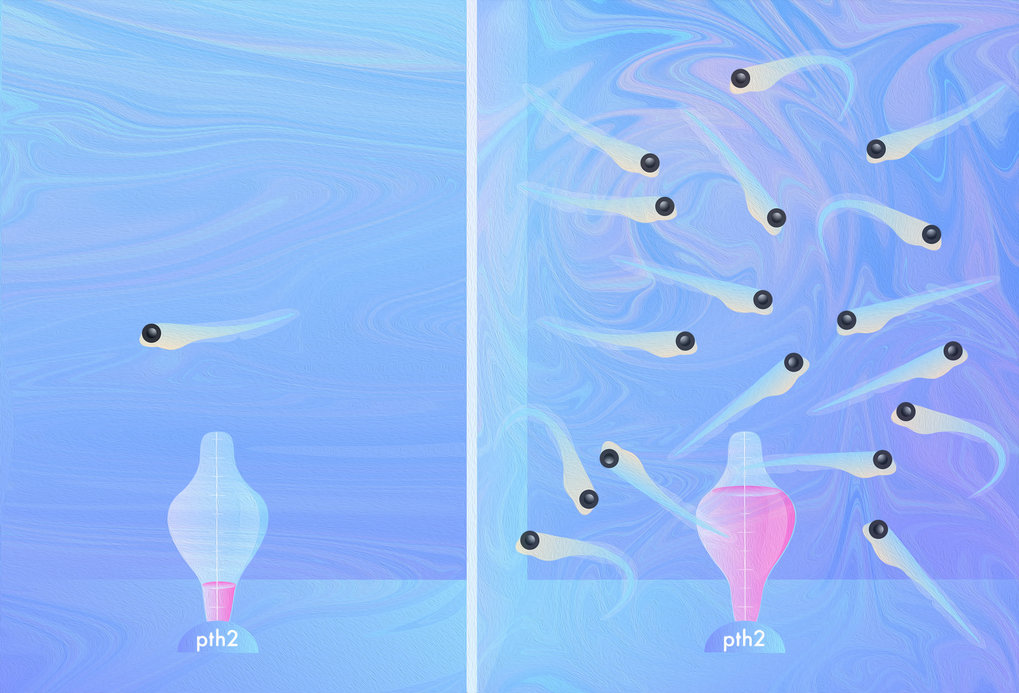 Expression levels of the neuropeptide Pth2 in the zebrafish brain track the presence and density of others in the environment. © Max Planck Institute for Brain Research / J. Kuhl

Varying social conditions can cause long-lasting changes in animal behavior. Social isolation, for instance, can have devastating effects on humans and other animals, including zebrafish. The brain systems that sense the social environment, however, are not well understood. To probe whether neuronal genes respond to dramatic changes in the social environment, graduate student, Lukas Anneser, and colleagues raised zebrafish either alone or with their kin for different periods of time. The scientists used RNA sequencing to measure the expression levels of thousands of neuronal genes. 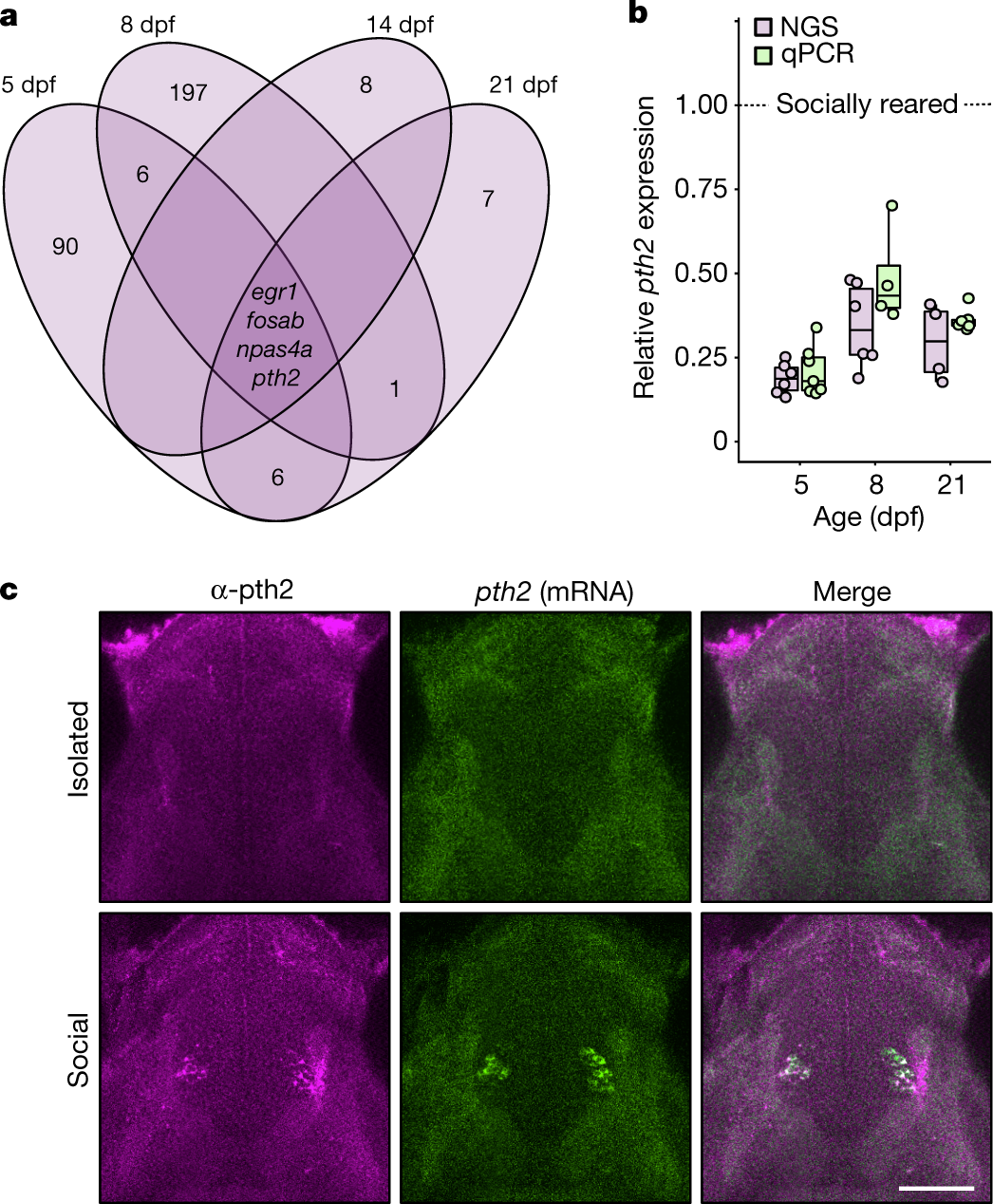 a, Venn diagram showing the number of transcripts that were significantly (either up or down) regulated between the isolated and social groups. n = 319 mRNAs were regulated in total, but only 4 mRNAs were regulated in the isolation groups of all durations. b, Box plots showing the validation of pth2 as differentially expressed using qPCR. The dashed line indicates the level of pth2 in socially reared fish at all time points.

“We found a consistent change in expression for a handful of genes in fish that were raised in social isolation. One of them was parathyroid hormone 2 (pth2), coding for a relatively unknown peptide in the brain. Curiously, pth2 expression tracked not just the presence of others, but also their density. Surprisingly, when zebrafish were isolated, pth2 disappeared in the brain, but its expression levels rapidly rose, like a thermometer reading, when other fish were added to the tank,” explains Anneser.

Thrilled by this discovery, the scientists tested if the effects of isolation could be reversed by putting the previously isolated fish into a social setting.

“After just 30 minutes swimming with their kin, there was a significant recovery of the pth2 levels. After 12 hours with kin the pth2 levels were indistinguishable from those seen in socially-raised animals,” says Anneser. “This really strong and fast regulation was unexpected and indicated a very tight link between gene expression and the environment.”

So which sensory modality do the animals use to detect others and drive changes in gene expression?

“It turned out that the sensory modality that controls pth2 expression was not vision, taste or smell, but rather mechanosensation – they actually ‘felt’ the physical movements of the swimming neighboring fish,” explains Schuman.

Fish perceive movement (“mechano-sense”) in their immediate vicinity via a sensory organ called the lateral line. To test the role of mechanosensation in driving pth2 expression, the team ablated the mechanosensitive cells within the fish’s lateral line. In previously isolated animals, the ablation of the lateral line cells prevented rescue of the neuro-hormone that was usually induced by the presence of other fish.

Just as we humans are sensitive to touch, zebrafish appear to be specifically tuned to swimming motion of other fish. The scientists saw changes in pth2 levels caused by water movements that is triggered by conspecifics in the tank.

“Our data indicate a surprising role for a relatively unexplored neuropeptide, Pth2- it tracks and responds to the population density of an animal’s social environment. It is clear that the presence of others can have dramatic consequences on an animal’s access to resources and ultimate survival – it is thus likely that this neuro-hormone will regulate social brain and behavioral networks,” concludes Schuman.