Posted by: RNA-Seq Blog in Commentary, Publications 19 days ago 513 Views

A new study suggests that differences in the expression of gene transcripts – readouts copied from DNA that help maintain and build our cells – may hold the key to understanding how mental disorders with shared genetic risk factors result in different patterns of onset, symptoms, course of illness, and treatment responses. Findings from the study, conducted by researchers at the National Institute of Mental Health (NIMH), part of the National Institutes of Health, appear in the journal Neuropsychopharmacology.

“Major mental disorders, such as schizophrenia, bipolar disorder, and major depressive disorder, share common genetic roots, but each disorder presents differently in each individual,” said Francis J. McMahon, M.D., a senior author of the study and chief of the Human Genetics Branch, part of the Intramural Research Program NIMH. “We wanted to investigate why disorders present differently, despite this seeming genetic similarity.”

McMahon and colleagues suspected that the brain’s transcriptome may hold some clues. The human genome is made up of DNA that contains instructions for helping maintain and build our cells. These instructions must be read and then copied into so-called “transcripts” for them to be carried out. Importantly, many different transcripts can be copied from a single gene, yielding a variety of proteins and other outputs. The transcriptome is the full set of transcripts found within the body.

The researchers used postmortem tissue samples to examine the brain transcriptomes of 200 people who had been diagnosed with either schizophrenia, bipolar disorder, major depressive disorder, or who did not have a known mental illness. The researchers examined both genes and transcripts expressed in the subgenual anterior cingulate cortex, a brain site involved in mood disorders, reward, impulse control, and emotion regulation. The brain tissue samples came from the NIMH Human Brain Collection Core, curated by NIMH’s Barbara Lipska, Ph.D., co-senior author of the paper.

To increase the odds of detecting rare transcripts, the researchers sequenced the transcripts at a resolution about four times greater than that used in previous studies. This technique identified 1.5 times more transcripts than earlier studies using the same method at lower resolution, confirming that this sequencing method picks up many transcripts that otherwise would have been missed.

Overlap of differentially expressed genes and transcripts across disorders 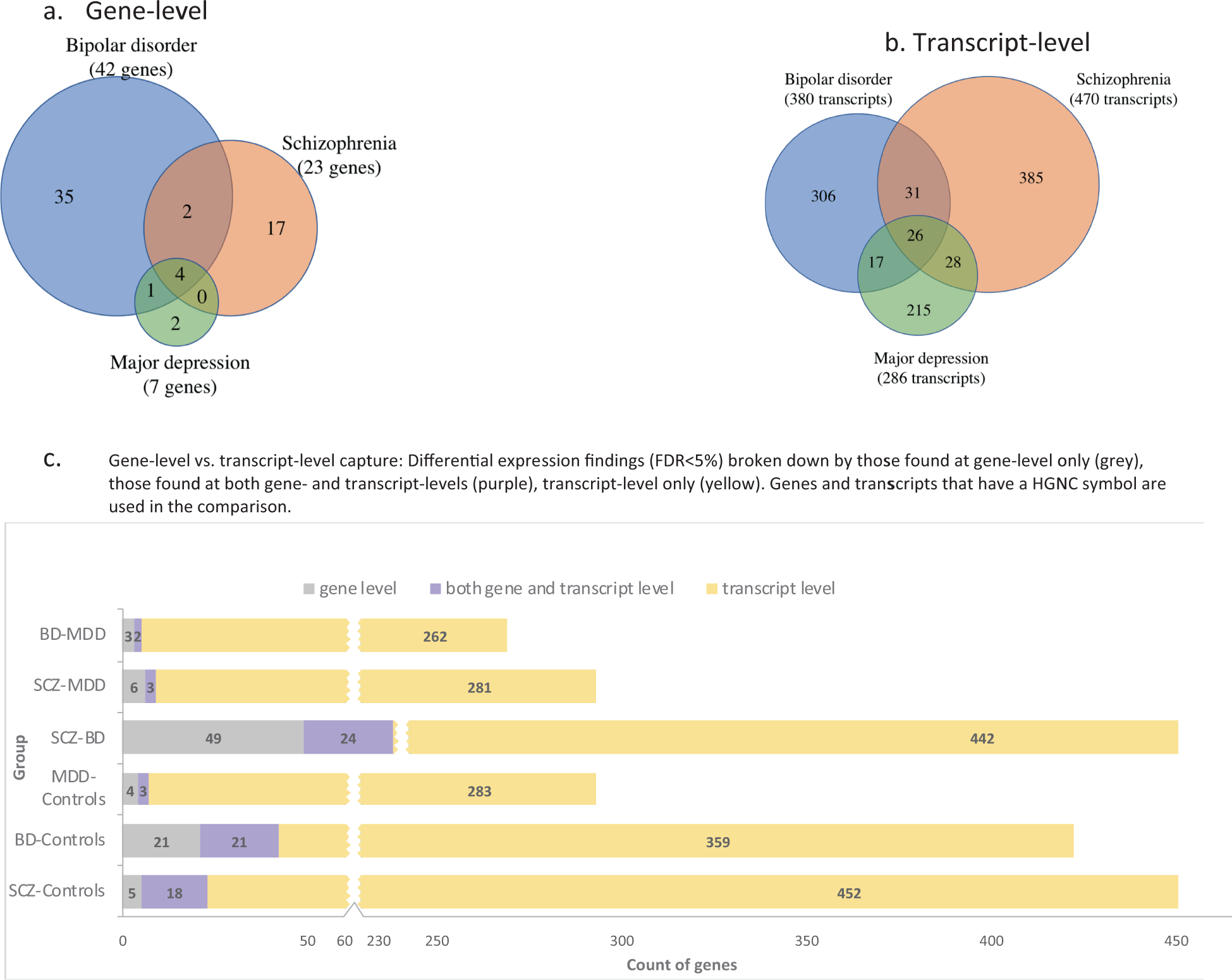 Venn diagrams show counts of DE (FDR < 5%) genes (a) or transcripts (b) in case–control comparisons for all three disorders. In (c) differential expression findings are broken down by those found only at the gene level (gray), at both gene and transcript levels (purple), or at the transcript level only (yellow).

Parts of a gene’s instructions may be kept in or left out during the transcription process. The researchers found that a common genetic variant that regulates this inclusion and exclusion, called splicing quantitative trait loci (sQTLs), may play a notable role in the inherited risk for each disorder.

“We found that subtle differences in gene expression across different disorders reflect more pronounced and diagnosis-specific changes at the level of transcripts,” said McMahon. “A cell can express many different transcripts from the same gene, resulting in different proteins – and potentially different illness processes.”

More research is needed to better understand the functions of different transcripts, the timing of alternative splicing, and the transcriptomic differences in specific brain regions and cell types. However, the current study sheds light on the importance of understanding transcript-level differences to get a full picture of why mental disorders vary in onset, progression, and symptoms.