Current approaches to single-cell RNA sequencing (RNA-seq) provide only limited information about the dynamics of gene expression. Researchers from MIT and the Broad Institute of Harvard and MIT present RNA timestamps, a method for inferring the age of individual RNAs in RNA-seq data by exploiting RNA editing. To introduce timestamps, the researchers tag RNA with a reporter motif consisting of multiple MS2 binding sites that recruit the adenosine deaminase ADAR2 fused to an MS2 capsid protein. ADAR2 binding to tagged RNA causes A-to-I edits to accumulate over time, allowing the age of the RNA to be inferred with hour-scale accuracy. By combining observations of multiple timestamped RNAs driven by the same promoter, we can determine when the promoter was active. The researchers demonstrate that the system can infer the presence and timing of multiple past transcriptional events. Finally, they apply the method to cluster single cells according to the timing of past transcriptional activity. RNA timestamps will allow the incorporation of temporal information into RNA-seq workflows. 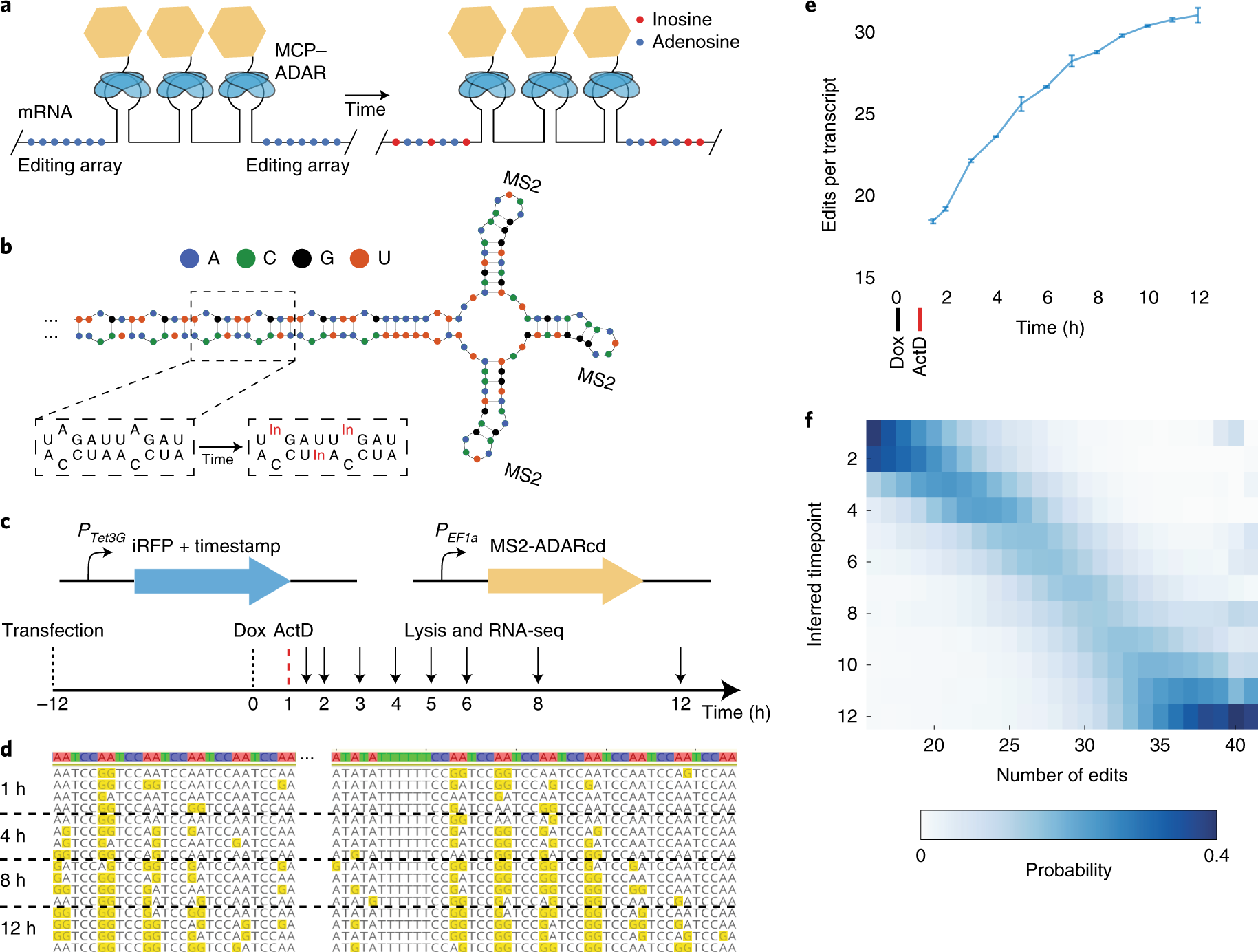 a, Schematic of the timestamps approach, consisting of editing arrays of adenosines (blue dots) and several MS2 step loops in the 3′ UTR of an mRNA. In the presence of an MCP–ADAR fusion (MCP, blue ellipses; ADAR, yellow hexagon), timestamps are edited over time by catalytic conversion of adenosine to inosine (red dots). b, A schematic structure of a portion of one timestamp, showing MS2 stem loops and the repetitive, double-stranded RNA motif that serves as the editing substrate. c, Schematic representation of the Tet-responsive timestamped mRNA system and experimental timeline. d, Examples of timestamps edited for different amounts of time, showing the accumulation of A-to-I edits. e, The mean number of edits per timestamp observed after editing for different amounts of time. Data are represented as mean ± s.d. (n = 3 biological replicates). f, The number of edits per timestamp is shown for different specified ages. Columns are normalized to 1. Each column can be interpreted as a probability distribution of when a timestamped RNA with a given number of edits is likely to have been made.