In recent years, the single-cell genomics field has made incredible progress toward disentangling the cellular heterogeneity of human tissues. However, the overwhelming majority of effort has been focused on single-cell gene expression rather than the chromatin landscape that shapes and is shaped by gene expression. Toward advancing our understanding of the regulatory programs that underlie human cell types, a team led by researchers at the University of Washington School of Medicine, set out to generate single-cell atlases of both chromatin accessibility (this study) and gene expression from a broad range of human fetal tissues.

Regions of accessible chromatin in our genome, such as enhancers, play key roles in the determination and maintenance of cell fates. Accessible regions are also markedly enriched for genetic variation that contributes to common disease heritability. The vast majority of chromatin accessibility data collected to date lacks single-cell resolution, limiting our ability to infer patterns such as which cell types are most relevant to each common disease. The researchers had previously demonstrated single-cell profiling of chromatin accessibility using combinatorial indexing, based on two rounds of in situ molecular barcoding. Here, they describe an improved assay that uses three levels of combinatorial indexing and does not rely on custom reagents. The method, sci-ATAC-seq3, reduces costs and opens the door to the scales necessary for generating a human cell atlas of chromatin accessibility. 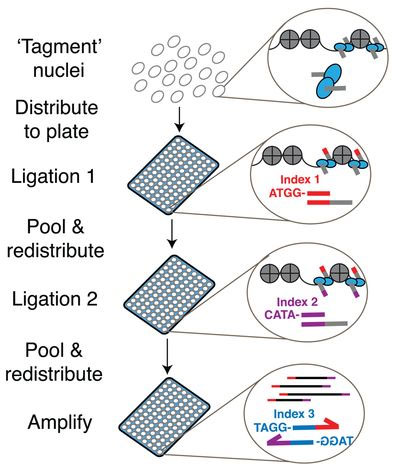 The research team applied sci-ATAC-seq3 to 59 human fetal samples ranging from 89 to 125 days in estimated postconceptual age and representing 15 organs, altogether obtaining high-quality chromatin accessibility profiles from ~800,000 single cells. Gene expression data collected on an overlapping set of tissues were leveraged to annotate cell types. They asked which transcription factor (TF) motifs found in the accessible sites of each cell best explain its cell type affiliation, revealing both known and potentially previously unknown regulators of cell fate specification and/or maintenance. Many TFs could be putatively assigned as activators or repressors depending on whether their expression and the accessibility of their cognate motif were positively or negatively correlated across cell types. Comparing chromatin accessibility from cell types that appear in multiple tissues revealed that whereas blood cell types are highly similar across organs, endothelial cells exhibit organ-specific chromatin accessibility, which appears to be controlled combinatorially by several TFs with overlapping expression patterns. The researchers leveraged their master set of 1.05 million accessible sites, spanning 532 Mb or 17% of the reference human genome, to score cell type–specific links between candidate enhancers and genes based on coaccessibility, to detect cell type–specific enrichment of heritability for specific common human diseases, and to identify genetic variants affecting chromatin accessibility in cis. Comparisons with chromatin accessibility in corresponding adult tissues allowed us to identify fetal-specific cell subtypes and nominate POU2F1 as a potential regulator of excitatory neuron development.

Sci-ATAC-seq3 adds to a growing repertoire of single-cell methods that use combinatorial indexing, a technical paradigm whose advantages include exponential scaling and greater range to profile diverse aspects of single-cell biology. The research team anticipates that the intersection of single-cell chromatin accessibility and gene expression will critically accelerate the field’s long-term goal of establishing a deep, predictive understanding of gene regulation.

Availability – An interactive website facilitates the exploration of these freely available data by tissue, cell type, locus, or motif (descartes.brotmanbaty.org).