Acute lymphoblastic leukemia (ALL) is the most common type of cancer in children. It can occur in various forms, differing by specific changes in the genetic material of the leukemia cells, but also by their response to therapies. An international team of scientists from Berlin, Düsseldorf, Hannover, Heidelberg, Kiel, and Zurich has succeeded in decoding the molecular characteristics of an as yet incurable subtype of leukemia, paving the way for new therapeutic approaches. Their results have been published in the current issue of the journal Nature Genetics (27 July).

Although intensive research over the least decade has led to significant improvement of the survival rates of children suffering from ALL, a subset of patients still remains resistant to treatment. One such example is a very aggressive and incurable subtype associated with a t(17;19) chromosomal translocation, which occurs due to breakage and aberrant fusion of genetic material in the tumour cells, resulting in the formation of a new oncogenic protein encoded by parts of the genes TCF3 and HLF, respectively (TCF3-HLF-positive leukemia cells). Until now, the molecular basis of this dismal phenotype has remained elusive. An international group of clinicians and scientists from different universities and research institutions, among them the Berlin-based Max Planck Institute for Molecular Genetics (Department of Vertebrate Genomics, Hans Lehrach, group Marie-Laure Yaspo) has conducted an in-depth analysis of the molecular features of the t(17; 19) ALL subtype.

With the aim of identifying therapeutic entry points for this incurable form of ALL, the consortium team decoded both the genome and the transcriptome of the cancer cells, thus identifying, which genes are active in the leukemic cells. Using sophisticated bioinformatics methods, the team found genetic aberrations in addition to the known translocation, and deciphered the so-called expression profile of the cancer cells by means of RNAseq, a focus of research in Marie-Laure Yaspo’s group in Berlin. They could show that the interplay between the fused TCF3-HLF oncogenic protein, additional DNA changes, and an altered gene expression program leads to a re-programming of leukemic cells to an early, stem-cell like, developmental stage, although the phenotypic appearance of the cells remains similar. ”This technique provides a quantitative read out of the actual genetic program occurring in the cancer cells, which allowed us to uncover relevant molecular mechanisms cooperating to promote tumorigenesis, and to identify possible druggable targets. These findings could only be achieved with the analysis of the messenger RNAs”, says Yaspo.

Further, researchers from the team of Jean-Pierre Bourquin from the University Children’s Hospital in Zürich, Switzerland, transplanted the leukemic cells in mouse. By establishing a “humanized mouse model“, they provided an invaluable tool for testing the therapeutic response of the leukemic cells to different drugs. The consortium team demonstrated that the engrafted cells expanded in the mouse and retained most of the genetic features and expression profiles of the original leukemic cells. The cells thus behaved in a similar manner than in the patient, offering attractive possibilities for translational medicine. The Zürich Group tested close to one hundred drug substances, and demonstrated exquisite response of the mouse model TCF3-HLF-positive cells to the drug Venetoclax, a drug targeting the protein BCL2, which has already shown efficiency in other type of cancers. 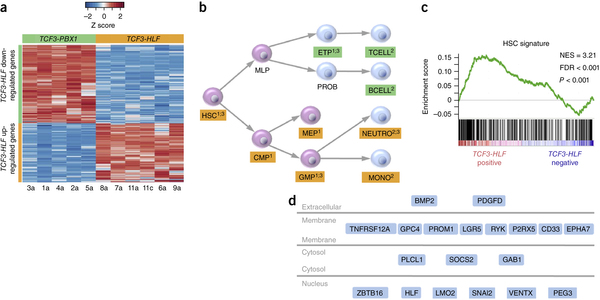 (a) Heatmap of the 401 differentially expressed genes between the two ALL subtypes (edgeR, |log2(fold change)| ≥ 1, false discovery rate (FDR) ≤ 0.001). (b) Enriched hematopoietic stages in TCF3-HLF–positive (orange) and TCF3-PBX1–positive (green) ALL.

The results of this study show the strong potential of coordinated and interdisciplinary research approaches utilizing new technological advances for cancer research. The project was made possible with the shared contribution of the research teams from Jean-Pierre Bourquin, University Children’s Hospital Zürich, Martin Stanulla, Hannover Medical School, Arndt Borkhardt, Heinrich Heine University of Düsseldorf, Jan Korbel, European Molecular Biology Laboratory (EMBL) in Heidelberg, Andre Franke, Christian Albrechts University of Kiel, and Marie-Laure Yaspo, Max Planck Institute for Molecular Genetics in Berlin. The project was funded by the German Federal Office for Radiation Protection via the Environmental Research Program of the German Federal Environment Ministry and by the Swiss Nationalfonds (SNF).