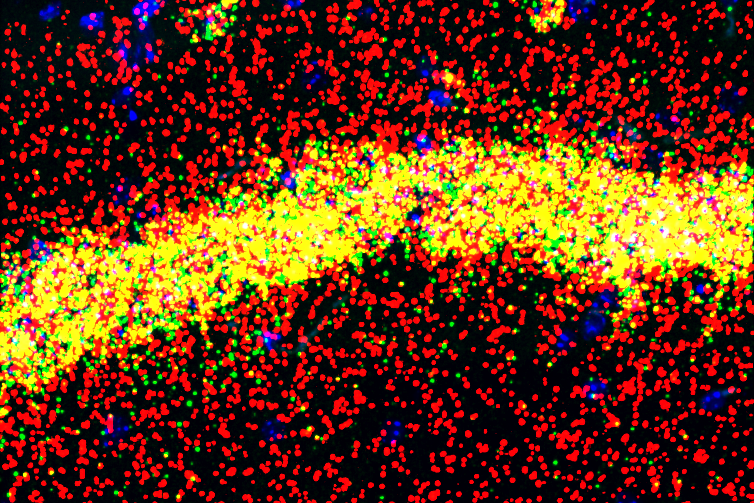 What happens inside neurons when we memorize a password or learn the cello? Some of our basic understanding about learning and memory comes from the study of conditions in which cognitive development is disrupted. For example, FMRP, a protein whose loss causes fragile X syndrome, intellectual disability, and some forms of autism has been shown to play a key role in these brain functions, helping regulate synaptic connections between neurons.

A new study now suggests that the role of this protein is more sophisticated than previously known. Looking at memory neurons in the hippocampus region of the mouse brain, Rockefeller scientists found that FMRP has two different jobs. Inside a neuron’s extensions, or dendrites, it regulates proteins required for strengthening the connections with other neurons. Inside the body of the cell, however, FMRP regulates the overall state of gene expression in the neuron.

“By micro-dissecting the brain tissue, we were able show that this protein controls distinct functions at different cellular locations,” says Robert B. Darnell, Rockefeller’s Robert and Harriet Heilbrunn Professor and HHMI Investigator, who led the research.

The findings, published in the journal eLife, may give new clues to mechanisms underlying learning and memory, intellectual dysfunction, and autism.

The forming of every memory, or the fading of another, requires a change in the strength of synapses between neurons. As incoming communication reaches it in the form of an electric signal, a neuron can modify synaptic strength, for example by creating new receptors or removing old ones, an upgrade that requires it to quickly produce a slew of new proteins.

This protein production occurs at the cell’s dendrites, which are filled with RNA molecules waiting to be translated into proteins. FMRP acts like a switch, delaying translation by binding to the RNA sequences, then starting it up by dissociating from the RNA.

More than 900 RNAs are known to be directly bound and regulated by FMRP. To better understand the protein’s role in learning and memory, Darnell and his colleagues marked individual mouse neurons using molecular genetics, and then dissected synapses and cell bodies by hand to separate them. Next, they used CLIP, a technique developed by the lab to freeze protein-RNA complexes in their place and analyze their composition.

The dendrite fraction contained FMRP bound to RNAs whose protein products can change the synaptic response.

Simultaneously, within the cell body of the same neuron, the protein bound to a different set of RNAs that code for chromatin modifiers, proteins that regulate gene expression by entering the cell nucleus and adding chemical tags to DNA.

The findings suggest FMRP helps establish a feedback loop between the nucleus and the dendrites, a mechanism that Darnell believes may provide a crosstalk between a cell’s command center and its thousands of faraway extensions, keeping the synaptic response under control.

“If neurons weren’t under tight control, they could keep getting more and more excited, ultimately leading to a seizure, a phenomenon seen in fragile X syndrome,” he says. “The system is built to contain itself.”