In reality, of course, the process is vastly more complicated than the schema first articulated nearly 60 years ago by Nobel Laureate Francis Crick, co-discoverer of the DNA’s double-helix structure. For one, there are multiple types of RNA, three of which—messenger RNA (mRNA), transfer RNA (tRNA), and ribosomal RNA (rRNA)—are essential for proper protein production. Moreover, RNAs that are synthesized during the process known as transcription often undergo subsequent changes, which are referred to as “post-transcriptional modifications.” 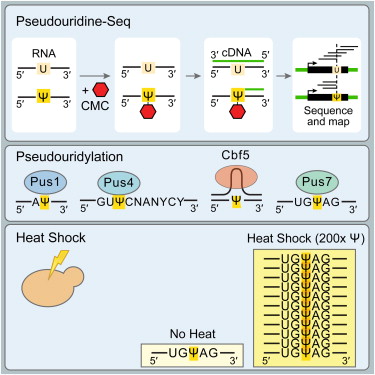 Multiple such RNA modifications have been documented over the years, although the precise functions and significance of many of these have been shrouded in mystery. Among the most common post-transcriptional modifications is pseudouridylation, during which the base nucleoside uridine—the ‘U’ of the four base RNA nucleosides abbreviated as A, C, G, and U—has its chemical structure altered to form a molecule known as pseudouridine (ψ). To date, ψ has been found in abundance in tRNA, rRNA, and small nuclear or snRNA, but was thought not to exist in mRNA.

Deploying sophisticated high-throughput sequencing technology, dubbed ψ-seq, a team of Whitehead Institute and Broad Institute researchers collaborated on a comprehensive, high-resolution mapping of ψ sites that confirms pseudouridylation does indeed occur naturally in mRNA. This somewhat surprising finding and the novel approach that led to it are revealed online this week in the journal Cell.

“This is really a better, more quantitative method to measure this modification, which is interesting in and of itself,” says Douglas Bernstein, a co-first author of the Cell paper. “Finding the modification in mRNA was an unexpected bonus.”

Bernstein, a postdoctoral researcher in the lab of Whitehead Institute Founding Member Gerald Fink, collaborated with postdoc Schragi Schwartz and Max Mumbach in the lab of Broad Institute Core Member Aviv Regev to orchestrate the ψ mapping in yeast. Having discovered pseudouridylation at dozens of sites in mRNA, the group set out to determine the functional role of the modification.

Taken together, these findings suggest that heat shock activates a dynamic pseudouridylation program in yeast that may lead to beneficial outcomes for the organism, perhaps by increasing mRNA stability under adverse conditions.

While the research begins to outline a role for pseudouridylation of mRNA in yeast, its methodology and findings are likely to have implications in humans as well. As part of this work, the scientists performed ψ-seq on a line of human cells as well, finding remarkable similarity in mRNA pseudouridylation sites between human and yeast cells. Notably, a number of human diseases, including dyskeratosis congenita, which is characterized by a predisposition to cancer and bone marrow failure, are associated with mutations in PUS genes, suggesting that ψ-seq may have applications in uncovering the significance of RNA pseudouridylation in human pathologies.

Gerald Fink’s primary affiliation is with Whitehead Institute for Biomedical Research, where his laboratory is located and all his research is conducted. He is also a professor of biology at Massachusetts Institute of Technology.